Former Deputy Governor Bank of Uganda Dr. Louis Kasekende is in hot soup following the whistleblower petitioning the Inspector General of Government (IGG) with evidence that he has more property than he declared to the IGG.

Thecapitaltimes has landed on a document received by the Inspectorate titled confidential notes, corruption against former Deputy Governor Louis Kasekende.

According to the whistleblower, in accordance with the Leadership Code Act 2002, all public servants and leaders are required to declare their wealth to the IGG, but Kasekende didn’t declare his wealth. “He has acquired a lot of money and property in Luzira, Bugolobi, Buloba along Mityana road, and Naguru and evidence is attached to this effect” reads the report. It further continues “Kasekende’s leaked are beyond, he has account in one of the banks in Zambia and this account I will avail the evidence with time. 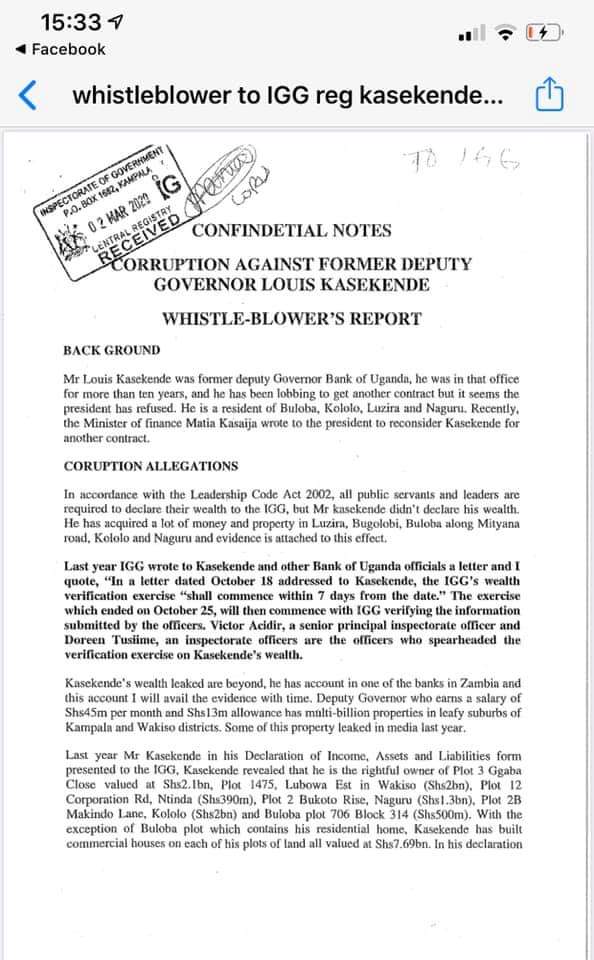 Part of the whistle blowers petition

The whistleblower further alleges that the former number two at the central bank has properties in United Kingdom and Zambia.

“Kasekende and wife own other properties in the United Kingdomwhich the IGG needs to investigate and these property evidence is attached. Many witnesses are ready to give evidence to that effect as long as they are protected by your office. Kasekende has a woman he uses called Agelah Nasaali, she is based in Zambia she has a company dealing in mining called KASE-NASA Mining Limited, Kasekende has 60 per cent. It has account number 600123445001 in Cavmont Bank Limited (CBL). Evidence will be given to investigator at the right time” Reads the petition.

We’ve further learnt that an official of the Inspectorate known as Naol Akello who previously handled the earlier probe into same allegations is alleged to have taken a low profile in investigating Mr. Kasekenda after a meeting with one of the city lawyer who arranged and met her in Nairobi. 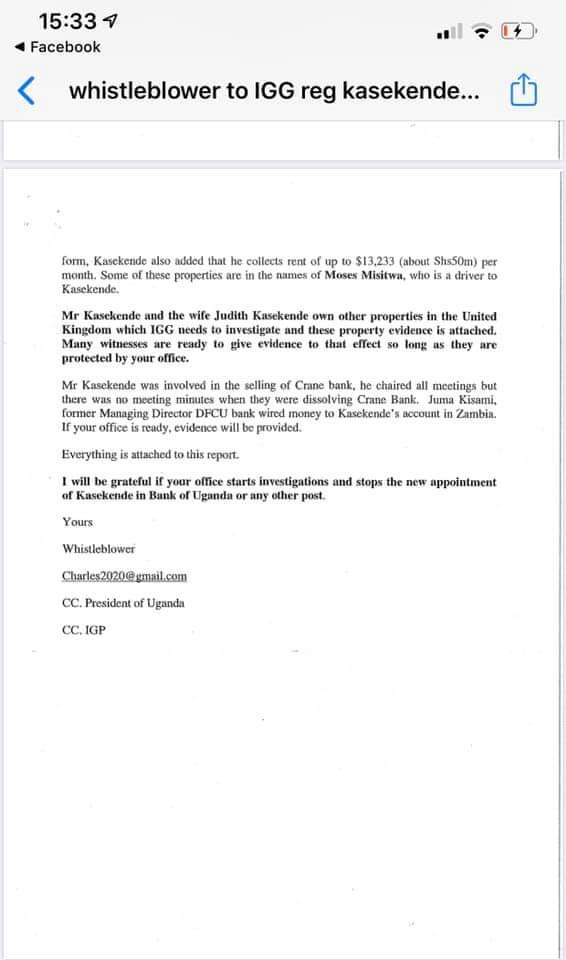 Part of the Petition

According to an online newspaper called  Eagle Online reported that another lawyer known as Robert has been frequenting the Inspectorate with a view of stopping the investigations.

Kasekende’s contract as Deputy Governor at Bank of Uganda (BoU) expired on January 13, 2020 and he is still secretly doing everything possible, including all sorts of lobbying to ensure it’s renewed besides handing over Office.

Sources says the lobby is still ongoing but it faced a snag when Secretary to the Treasury Keith Muhakanizi and Finance Minister Matia Kasaija both write confidential reports to the appointing authority indicating that he should be returned to the central bank.

In December 2018, a leaked document showed that Dr. Kasekende transferred 12 plots of land into the names of his driver Moses Musitwa in an effort to dodge the scrutiny of the Inspector General of Government (IGG).

The IGG among other mechanisms used the Leadership Code Act 2002, to catch senior public officials who may have involved in corruption to grow wealth. The officials are required by the Act to declare their properties for purposes of accountability and transparency.

According to the document, Dr. Kasekende transferred the properties to the names of his driver on January 31, 2018.

The document says Kasekende has 35 properties in his names yet he only declared to IGG six properties.

The leaked documents show that much as Kasekende transferred the properties into names his driver Musitwa, there is no evidence to show that the deputy governor sold the plots to the latter.