Andrew Mwenda who was appointed to the 23-man Presidential Advisory Committee (PAC) in 2011 during one of their annual meetings in NewYork, USA, was dropped over ‘diplomatic reasons’ in the changes by President Kagame that saw six new faces take over places in the PAC.

Mr Himbara who is familiar with Kagame’s ways, said it was unacceptable for Mwenda not to be entirely on Rwanda’s side.

“The Mwenda piece seems to be tame and reasonable. But in the land of sycophants we call Rwanda, Mwenda committed high treason for not calling Kagame a saint, and for not calling Museveni, evil,” Himbara said.

We’ve learnt that in due process, Mwenda paraded one of Africa’s billionaire to President Museveni to show how committed he is. 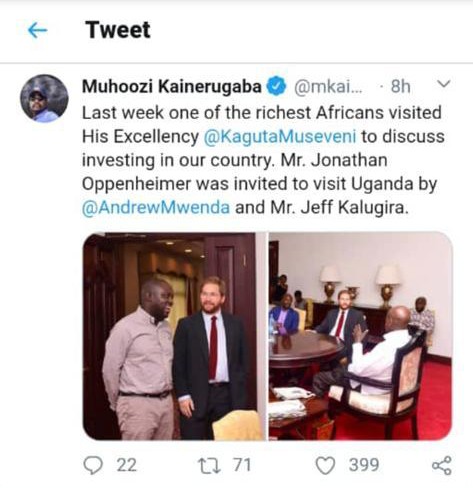 Further, to show his loyalty, Mwenda is furious and not happy with former Security Minister, Gen. Tumukunde’s bid for presidency. In his tweets, Mwenda slams Tumukunde’s points saying they are baseless and found of lies.

When in power, Tumukunde bribed & intimidated journalists, threatened & sabotaged media houses, & talked ill of journalists & journalism! Now he has realized the value of a free press which is giving him a platform to raise his concerns! But does he remember his record?

Watching Tumukunde on NBS reminded of Grace Ibingira’s 1966 quip: Fate is a great joker, it always laughs last! Tumukunde lied to @KagutaMuseveni that Kale Kayihura was colluding with @PaulKagame to overthrow govt. Now Tumukunde is appealing to Kagame to help him overthrow M7!

Recently, the same Mwenda accused Uganda’s head of state Yoweri Museveni for mismanaging relations with Kigali and that this is why Rwanda closed its common border with Uganda. Mwenda then asserts that ”I think Uganda and Rwanda will most likely degenerate into war.” Mwenda concludes that the culprit in this conflict is Museveni and not Rwandan head of Paul Kagame.

In Mwenda’s own words, ”the problem between Uganda and Rwanda - as I know it - is the refusal of Kampala to listen to the concerns of Kigali.”

Mwenda proceeds to give examples of the issues Museveni has refused to address. As he puts it, ”for example, Rwanda has complained severally to Uganda both formally and informally about the presence of persons hostile to the government in Kigali.” Mwenda said that he has ”personally tried several times to interest Museveni in the issues Rwanda was raising but he either expressed indifference or paid lip service or said he will discuss them directly with Kagame, which he rarely did.” Here is my question: Was Mwenda writing this piece as an objective publisher of Uganda’s Independent newspaper, or was he expressing views in his capacity as a member of Kagame’s Presidential Advisory Council? It is the latter.

Even a visitor from another planet would most definitely be aware of the fact that Kagame was the chief architect of violence in the sub-continent. Museveni should be criticized heavily for the reserve - allowing Kagame to cause chaos in Uganda for decades.