Trending
HomeNewsCrimeZombo Baracks Attackers Were Mislead By A Witchdoctor – UPDF

The Uganda People’s Defence Forces (UPDF) Deputy Spokesperson Lt Col Deo Akiiki, has spoken out on the attack on a detach in Zombo.

In the March 9, 2020 statement, Col. Akiiki said that the attackers, who raided a Uganda People’s Defence Forces (UPDF) base in Oduk Village in Zombo Town Council, Zombo District were mobilised by a bunch criminals who were recently given amnesty by the government.

The attackers, armed with spears, machetes and other traditional weapons, raided the base on Thursday night in which, it is reported five soldiers and 22 attackers were killed.

According to Lt Col Akiiki, they include a one Avoya, a renowned witchdoctor in the area, a UPDF veteran Bosco Tonifa and ring leaders Otochon, Oketcha, Openji, and Howard Openjuru.

Lt Col Akiiki, however, dismissed reports that the attackers are a new rebel group called Uganda Homeland Liberation Force (UHLF) and that they are trained in Kiryandongo forest.

“Our soldiers managed to capture some of the invaders and they are helping us in our investigations. The motive of the attack is not known yet,” he said. 35 invaders were captured in the immediate and subsequent clashes as the UPDF repulsed the insurgents.” 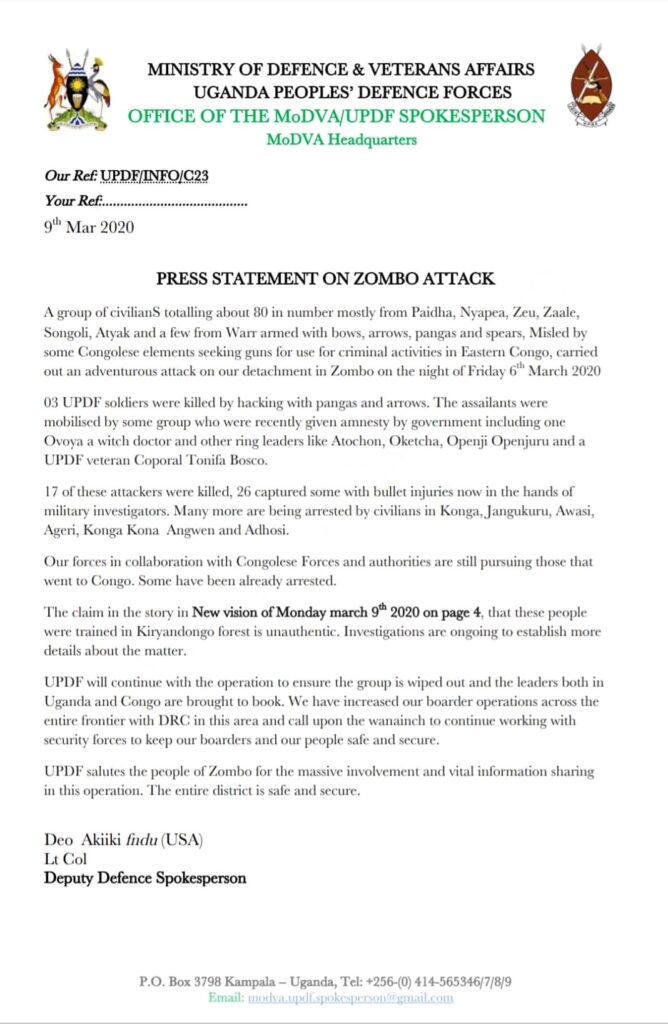 The attack led to an operation in the area leading to the arrest of 16 whole 15 attackers were killed while they tried to flee to the Democratic Republic of Congo.

“Investigations are ongoing to establish more details about the matter,” Akiiki said.

“The UPDF will continue with the operations to ensure the group is wiped out and its leaders both in Uganda and Congo are brought to book. We have increased our border operations across the entire frontier with DRC in this area.”

Lt Col Akiiki also revealed that UPDF has in the meantime intensified border operations across the entire frontier with DRC, and that the operations will continue until the group is wiped out.