Trending
HomeNewsCrimeUPDF Col. ‘Nyakaisiki’ In Trouble For Pocketing Late Brother’s Pension
Lt. Col. Carol Nyakaisiki Basaliza, a senior officer of the Uganda Peoples Defence Forces (UPDF), is being accused by family members of allegedly pocketing her late brother Maj. Francis Kasaija’s pension, instead of giving it to the orphans.
Col. Nyakaisiki is sister to late Major Francis Kasaija, who passed away two years back.
However, family members reveal that ever since his demise, Nyakaisiki has taken over powers of attorney to manage his estate.
They allege that she even submitted a Centenary Bank account number 3202023979 to the UPDF Pensions Department, through which  she receives late Kasaija’s pension, but instead of giving it to the widow or orphans she just pockets it.
“She withdrawals money from the deceased’s account and just takes it. Recently she withdrew Shs3.6m, yet she also took the money of October, November, December,” the family source revealed. 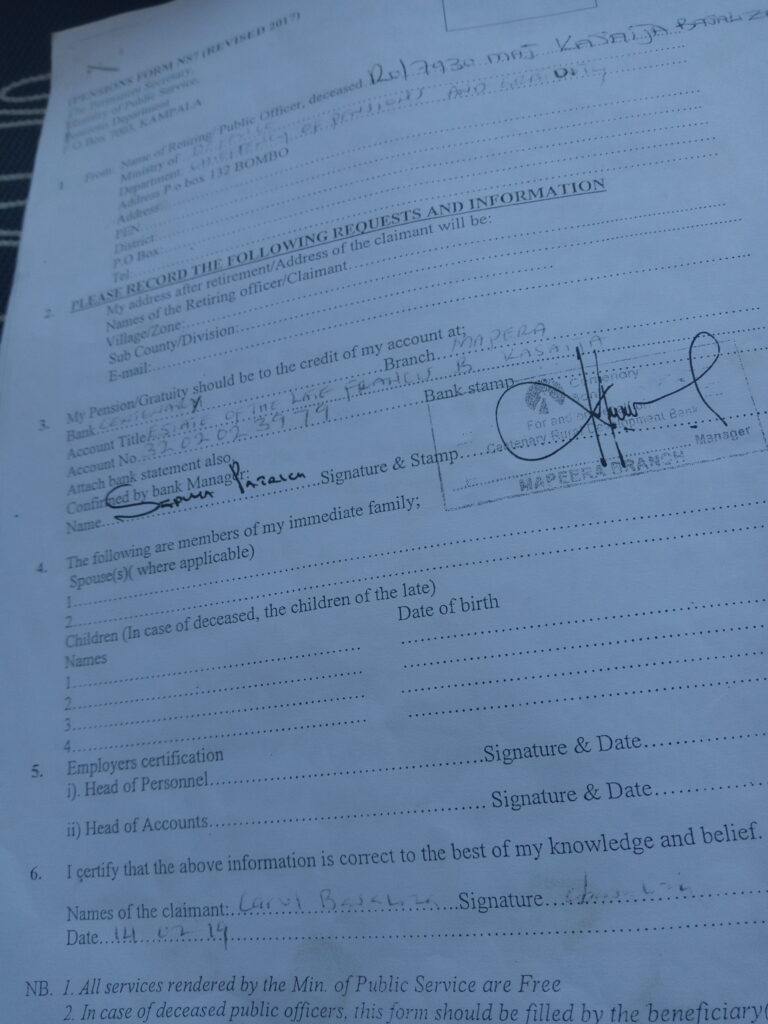 The source also revealed that although Col. Nyakaisiki claims to pay school fees for Maj. Kasaija’s orphans she has never even coughed a dime. Instead, it is their grandfather who pays school fees.
We have also learnt that the widow is living in fear because of the constant threats from Col. Nyakaisiki, who demanded that she backs off the matter.
Family members also reveal that Nyakaisiki had hatched a plot to take the orphans away from the widow, as a way of benefitting from their late father’s estate, until family members held a meeting recently which resolved that she should return the children.
The Colonel had taken the two children from her for a whole year and lived with them in Kampala without the mother ever seeing them. She reached an extent of having to sneak to their schools whenever she wanted to see any of them.
However, despite surrendering  the children, the Colonel has refused to surrender the pension account.
Besides that, family members also reveal that Nyakaisiki has been severally summoned by court over the matter of Maj.Kasaija’s estate which is registered as FPT-00-CV-CV-343/19, which was filed by Passi Binega and Adolf Mugisa  Basaliza but she has consistently snubbed the summons.
The last time she was summoned an advert was published in local dailies but still she didn’t appear. 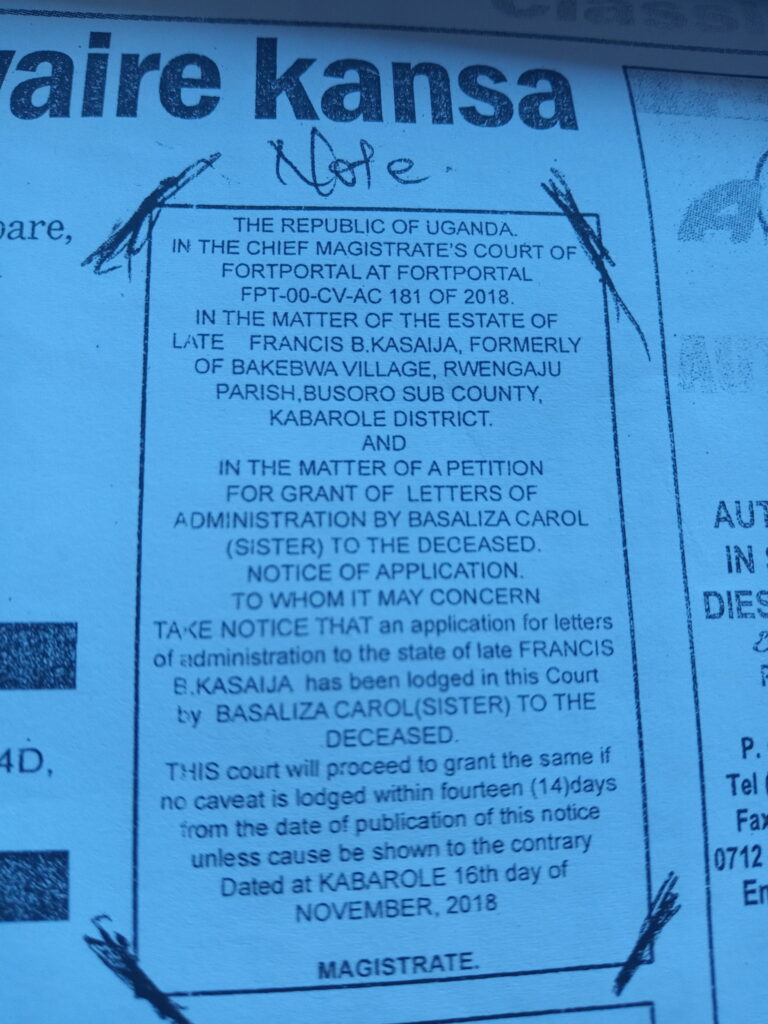 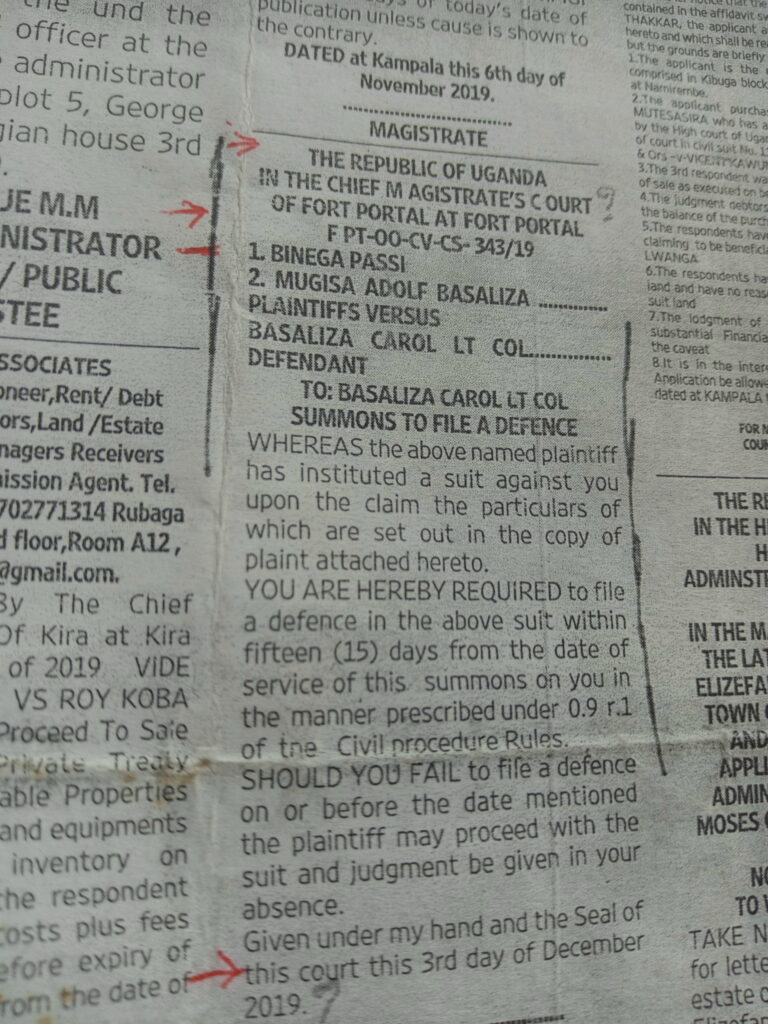 The case that was filed by Passi Binega and Adolf Mwesiga against Lt. Col. Carol Nyakaisiki

However, the family Blames the police for not taking action against the Colonel, despite the fact that they reported the matter after the scandal at the school.
Nyakaisiki made headlines a few weeks ago after she attempted to kidnap one of the orphans from. St. Leo’s S.S Kyegobe, where she almost got lynched by  students after the boy refused to with her without first informing his mother.

She claimed that she had gone to collect the boy, a one Mwebesa, on pretext that they had a family meeting the following day at their home in Rwengaju, regarding the succession plan of her late brother Maj. Kasaija, which wasn’t the case.

When the boy was called upon, he was happy to see the Aunt, well aware that the grandfather had switched him from Kampala to Fort Portal schools. However, he was curious  because the same Aunt is among those who want to use him as an excuse to acquire the deceased’s pensions and gratuity.

The boy was smart and pretended to go to the dormitory to pick his sweater, but later disappeared and couldn’t be traced anywhere. At that time Col. Nyakaisiki demanded the teacher to take her with the two gentlemen to the dormitory, which the teacher complied with.

In the process the boy demanded to talk to his mother on phone, with his colleagues listening and the mother was called, she objected to anybody taking her son anywhere.

Chaos broke out and students wanted to lynch the officer plus the two men she was with. But with the assistance of the teacher she was whisked away to the staff room and at that time the mother arrived.

No sooner had the mother arrived than the two confronted each other. But the school administrators separated them.

Shamefully, the officer drove away, leaving the boy behind and the school has since opened a case at Fort Portal Police, against the officer over her behavior and attempted kidnap of the student from school without the consent of his mother and guardian.