The Director of Research at Bank of Uganda, Dr Adam Mugume, was on Friday assigned to perform the duties of the Deputy Governor of Bank of Uganda.

The position fell vacant about three months ago after Dr Louis Kasekende’s contract ended. He served in that position for 10 years.

In a communication sent to the management and staff of Bank of Uganda on Friday evening after a special executive meeting presided over by Mr James Kahoza, Dr Mugume was unanimously selected to execute the duties of the deputy governor.

The communication signed by Mr Kahoza and copied to the governor (and also the board chair), Mr Emmanuel Tumusiime Mutebille, who was not present in the meeting, reads: “In exercise of the duties and powers of the board under section 10 of the Bank of Uganda Act (Chapter 51), the Board Members of the Bank of Uganda at a special meeting held on March 27, 2020, unanimously resolved to designate Dr Adam Mugume to perform the executive functions of the office of the Deputy Governor until a substantive deputy governor is appointed.” 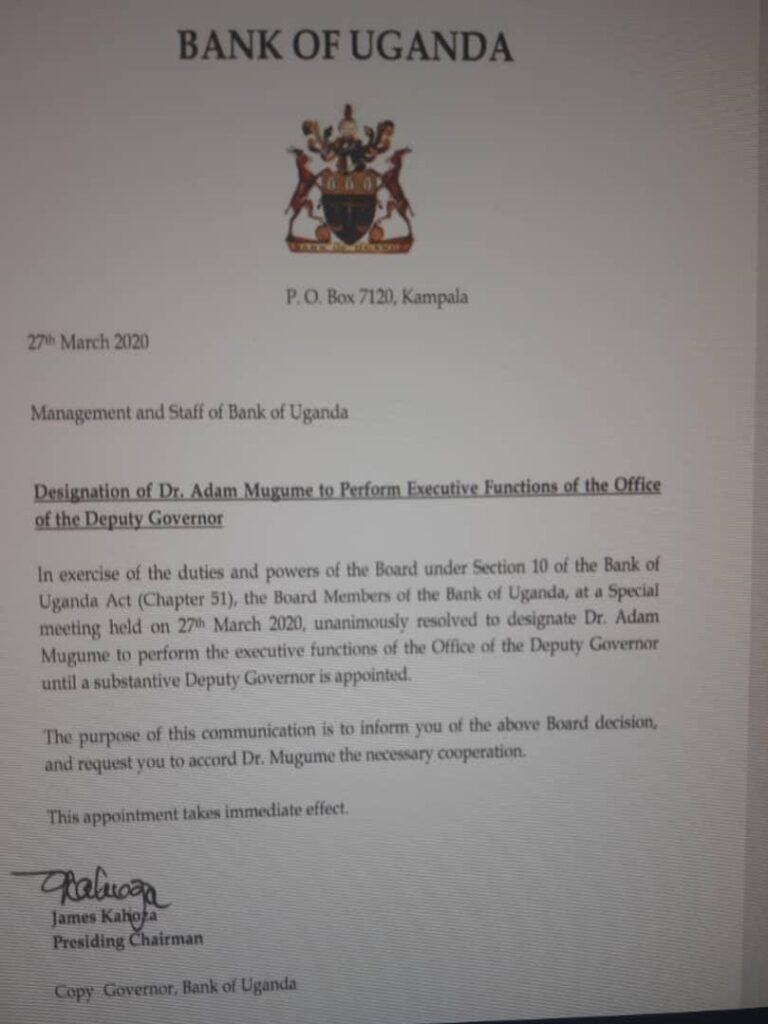 Meanwhile, we’ve separately learnt that the ailing economist giant, Prof. Mutebile was on Thursday rushed to Nakasero Hospital Kampala in critical condition. “Yes, he was badly off and we rushed him to Hospital but he has since responded very positively. His condition is longer threatening,” a source told this reporter on phone this afternoon.

Who Is Dr. Adam Mugume?

In 2007, Dr Mugume returned to the Bank of Uganda and joined the Economic Research Department, where he headed the Modelling and Forecasting Division; and he has since risen to head the Research and Policy Directorate.

He is credited for transforming monetary policy and was instrumental in helping Central Bank introduce the Inflation Targeting framework, which was adopted in July 2011.

His current designation now puts him closer to scooping the top position at the Central Bank as Governor, considering the fact that Governor Prof.Mutebile’s contract expires just next year, 2021 and is most likely not expected to be renewed given his health status and the long period he has been in that slot,plus the storms he has suffered while at the steering of the national reservoirs.