A statement from the office of the Rwanda Prime Minister said Nduhungirehe was fired “for consistently acting based on personal opinions over government policies, while serving as Minister of State in the Ministry of Foreign affairs and International cooperation in charge of East African African Community. 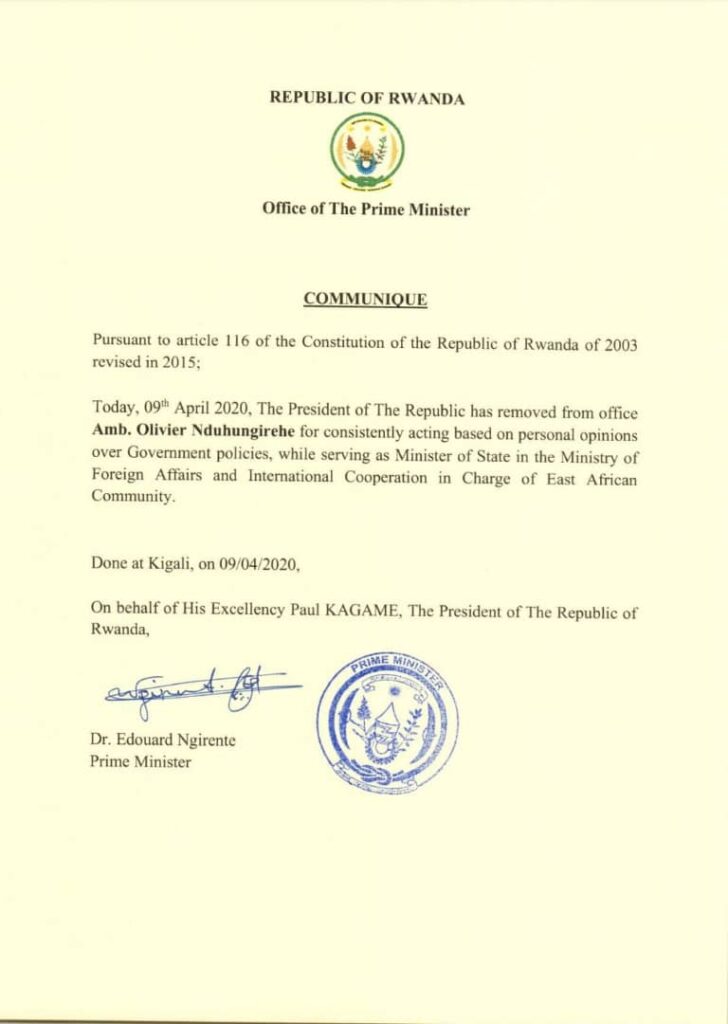 Outspoken Nduhungirehe has been leading the Kigali team in talks to normalise relations with Uganda, that broke to the level of Rwanda closing the border last year.

“I am grateful to President Kagame for the trust bestowed in me for the past two years an a half, when I was privileged to serve as Minister of State in charge of the East African Community. I am committed to continue serving my country  in another capacity,” said after news of his sacking was announced.

I am grateful to H.E @PaulKagame for the trust bestowed in me for the past two years an half, when I was privileged to serve as Minister of State in @RwandaMFA in charge of the East African Community. I am committed to continue serving my country & @RwandaGov in another capacity. https://t.co/RWkt7i90GJ

According to an insider, Nduhungirehe is accused for publicly coming on to Twitter to mourn Hutu opposition leaders such as Prime Minister Agathe Uwilingiyimana who were murdered on April 7, 1994.

In an April, 7, 2020, Nduhungirehe tweet that he knew the murdered families and added that he knew some of them “personally and grew up with their children.” 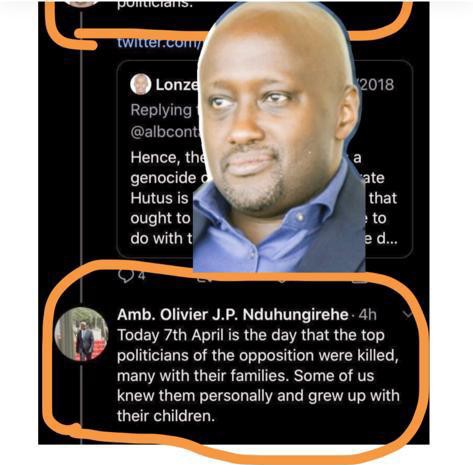 Nduhungirehe was immediately ambushed by Kagame’s social media army that reminded Nduhungirehe that “Today is not the day to remember politicians.” That was the end of Nduhungirehe career as minister in Kagame’s Rwanda.

Nduhungirehe seems to have forgotten that he worked for a totalitarian dictatorship that operates on the principle of blind and total submission to the powers that be.

The development in Kigali, comes less than 24 hours after Uganda’s Senior Presidential Adviser for Special Operations Lt. Gen Muhoozi Kainerugaba said the two countries have no reason to fight each other.

“Brothers,Comrades and Revolutionaries can quarrel but they should never fight. We have come from very far. I wish His Excellency General Kagame and the people of Rwanda a solemn and respectful kwibuka,” Muhoozi said as Rwanda remembered all those who died in the genocide in the 90s.