President Yoweri  Museveni  inspected the Nalubaale and Bujagali power plants in the Eastern district of Jinja that were last week choked by the floating islands of water hyacinth and papyrus at the Nile bridge that blocked the turbines resulting to a national power blackout. 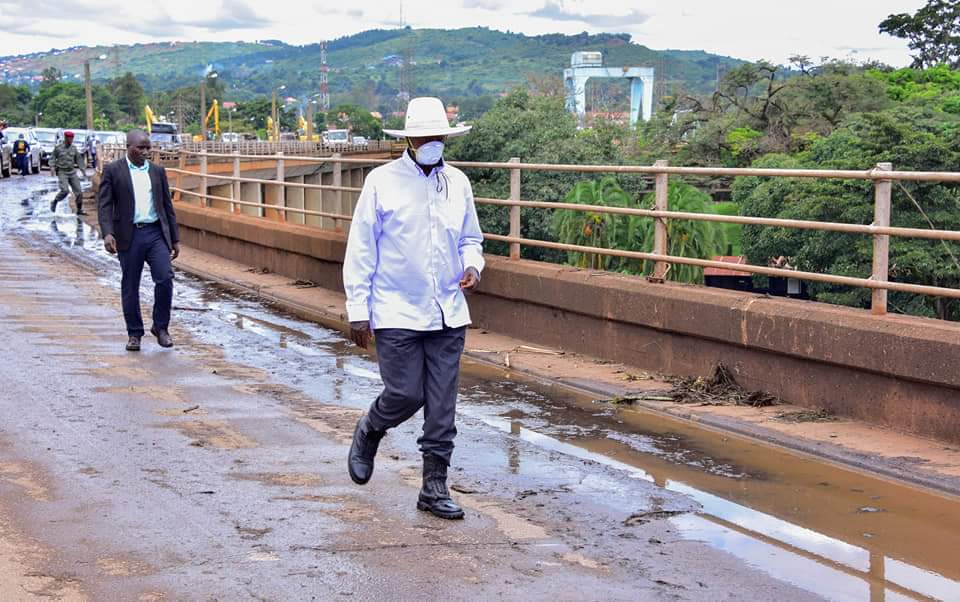 According to a brief from the National Environmental Management Authority (NEMA), Sudd islands previously located at the Kirinya side of Lake Nalubaale broke into two early last week following years of environmental degradation through human activity. The first island moved and blocked Nalubaale bridge while the larger part moved towards the dam and anchored opposite Jinja pier.

While at the site, President Museveni appreciated the Ministry of Works and Transport and NEMA for their concerted efforts and rapid response to the challenge and noted that that Uganda has the capacity to internally deal with the problem.

“You are doing a good job, we have the capacity to solve this. Get rid of the encroachers from the moving islands and get rid of the water-weed,” he said. The President noted the increasing water levels and noted that at 13.1 meters, these are the second highest water levels since Uganda started keeping records, with the highest level being 13.4 meters in 1964.

“The Bazzukulu have not seen this for a long time but they should know that Uganda now has a lot of spare water,” the President said.

According to the Executive Director of NEMA Dr. Tom Okurut who was at the site, the Ministry has the capability to remove the entire mass and completely stop the island from moving by harvesting it out of the water.

“The island moves in a rotational manner and so we have distributed forces on all sides. We have also mobilized all the boats available to surround it and harvest it,” he said

He said that Uganda is now out of the danger zone because they have been able to push the sudd from its risk location to the bay area near the pier where it can be cleared by the Ministry of Animal Industries and Fisheries and the Ministry of Works and Transport.

The blackout happened on the 14th of April 2020 at the time when the whole country was awaiting President Yoweri Museveni’s update and guidelines on new measures to combat the spread of the novel COVID-19 virus that is currently ravaging the world.