The Civil Division of the High Court has on Tuesday April 21, 2020 blocked the Parliamentary Commission from releasing the 10bn to MPs until the hearing of the application challenging such on 29th April 2020.

This comes after MPs Gerald Karuhanga of Ntungamo, and Jonathan Odur of Erute South petitioned court to block the release of this money.

The legislators, who were represented by A.F Mpanga and Company Advocates, argue that Parliament was wrong and selfish to allocate money to themselves.

They also argue that the Budget committee sneaked into the budget the allocation for Parliament.

The injunction which was issued by the High Court barring the Parliamentary Commission from disbursing the money to MPs, reads in part thus; 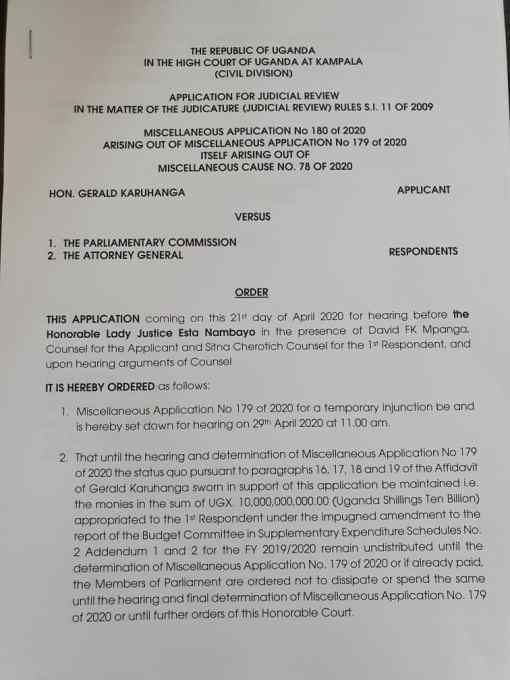 This Application coming on the 21st day of April 2020 for hearing before the Honorable Lady Justice Esta Nambeya in the presence of David FK Mpanga, Counsel for the Applicants and Sitna Cherotich, Counsel for the 1st Respondent, and upon hearing arguments of Counsel

IT IS HEREBY ORDERED as follows;