Total and Tullow have entered into an Agreement, through which Total shall acquire Tullow’s entire interests in Uganda Lake Albert development project including the East African Crude Oil Pipeline.

The overall consideration paid by Total to Tullow will be $575M, with an initial payment of $500M at closing and $75M when the partners take the Final Investment Decision to launch the project. In addition, conditional payments will be made to Tullow linked to production and oil price, which will be triggered when Brent prices are above $62/bbl. The terms of the transaction have been discussed with the relevant Ugandan Government and Tax Authorities and agreement in principle has been reached on the tax treatment of the transaction. 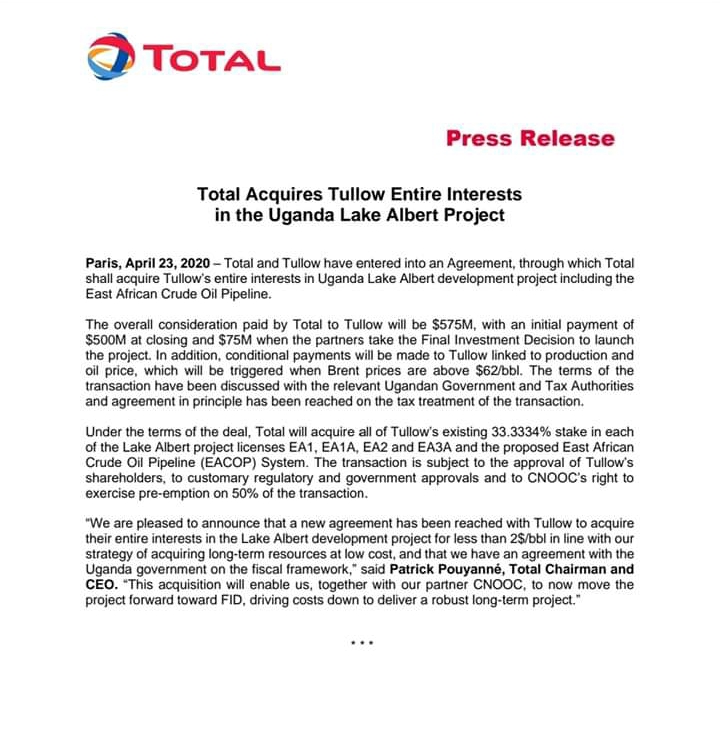 Under the terms of the deal, Total will acquire all of Tullow’s existing 33.3334% stake in each of the Lake Albert project licenses EA1, EA1A, EA2 and EA3A and the proposed East African Crude Oil Pipeline (EACOP) System. The transaction is subject to the approval of Tullow’s shareholders, to customary regulatory and government approvals and to CNOOC’s right to exercise pre-emption on 50% of the transaction.

“We are pleased to announce that a new agreement has been reached with Tullow to acquire their entire interests in the Lake Albert development project for less than 2$/bbl in line with our strategy of acquiring long-term resources at low cost, and that we have an agreement with the Uganda government on the fiscal framework,” said Patrick Pouyanné, Total Chairman and CEO. “This acquisition will enable us, together with our partner CNOOC, to now move the project forward toward FID, driving costs down to deliver a robust long-term project.”

Total is a major energy player that produces and markets fuels, natural gas and low-carbon electricity. Our 100,000 employees are committed to better energy that is safer, more affordable, cleaner and accessible to as many people as possible. Active in more than 130 countries, our ambition is to become the responsible energy major.

In April 2016, the Government of Uganda decided to export the Lake Albert oil through a pipeline (EACOP) via Tanzania to the port of Tanga. And in August 2016, the production licences for EA1 and EA2 were formally granted. The Uganda Joint Venture is now commencing the FEED (Front End Engineering and Design) phase for the Upstream and the EACOP pipeline.