Following our breaking story to the Energy Mafia series, that was taken on by various media houses thereafter, our news team has obtained information from the Ministry of Energy and Mineral Development that speaks of total distress among the two Ministers of Energy – Cabinet Minister Hon. Dr. Mary Goretti Kituttu, her Minister of State in charge of Energy Hon. Eng. Simon Dujang as well as Ministry’s Permanent Secretary (PS) Mr. Robert Kasande who doubles as the Chairperson Rural Electrification Agency Board.

In our story, we brought to the attention of the public on how the Ministry of Energy leadership was actually stuck with how to discipline the two individuals of Rural Electrification Agency (REA) that were found guilty of causing immense financial loss to government out of total negligence and corrupt tendencies.

News from the corridors of the Ministry indicate that this prompted the PS Kasande to call for an immediate meeting of the Board having renewed Oliver Kabaale’s contract as board member as well as brought on board Ambassador Agnes Kadama Kalibala, a former Director at the Ministry of Lands, Housing and Urban Development to replace Mrs. Ida Wanendeya.

Following the various arrests in different ministries of staff who have caused losses of as little as 5 Billion shillings, the senior board members were not happy to see that a full Minister is failing to superintend without bias over an agency under her control. 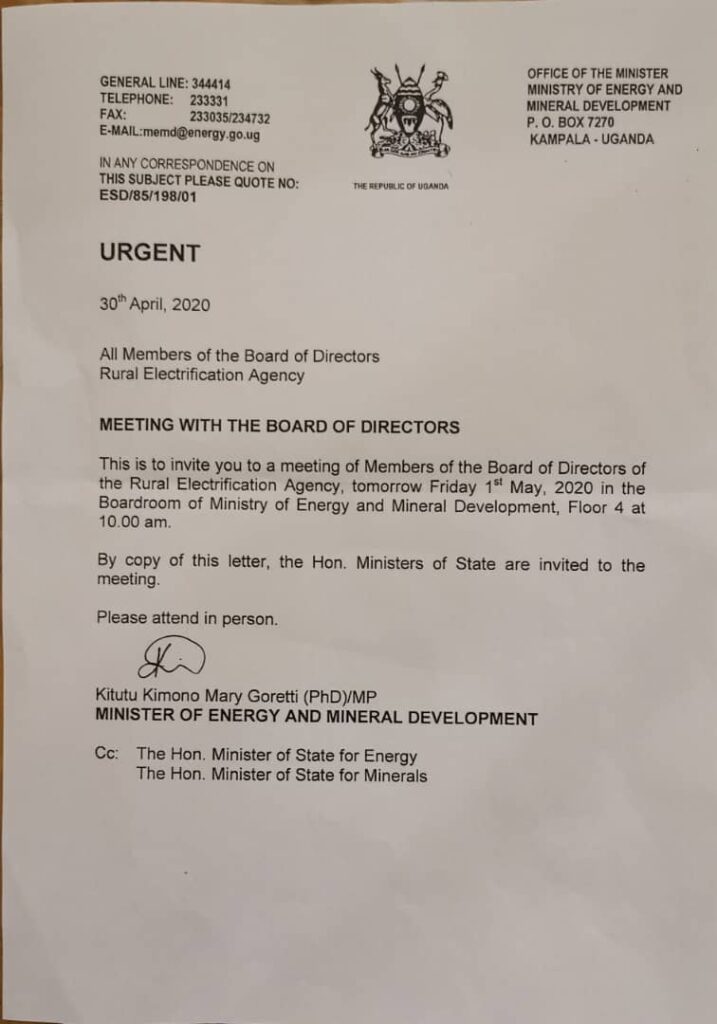 A letter inviting board of directors for an emergency meeting

It is believed that the board stood their ground and chose to implement the orders of the IGG through suspending the culprits that were found guilty – Mr. John Abouf Turyagyenda and Mr. Godfrey Khaukha Werikhe. This was because the very individuals had already been implicated in an internal audit done by the agency way back in 2015, but the then PS Dr. Isabalija opted to suspend Mr. Godfrey Turyahikayo and his deputy Werikhe on accusations of lack of oversight.

However, with the IGG doing an independent comprehensive technical investigation of the agency, it was discovered that Mr. Turyagyenda and Mr. Werikhe where total culpable of all the losses in the few lines because of their negligence and in some instances, aided the contractors to get paid for works not done. It is said the board chose to fully implement the suspension as recommended but the two blue-eyed boys of the Ministers did not waste time to mobilize for their safety. 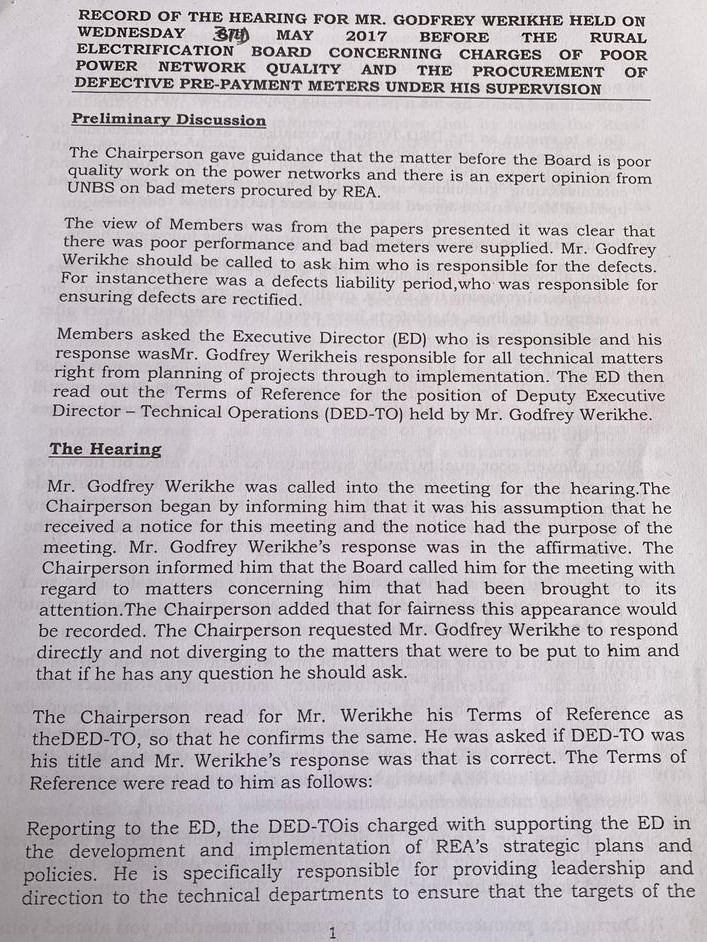 In total disregard of the recommendations of both the Board and the IGG, the Minister instructed the Chairman of the Board not to touch her “boys” because they know the Ministry better than any other. This order comes on the heels of the President recommending both the IGG and the CID to convict the two individuals Mr. Turyagyenda and Mr. Werikhe. 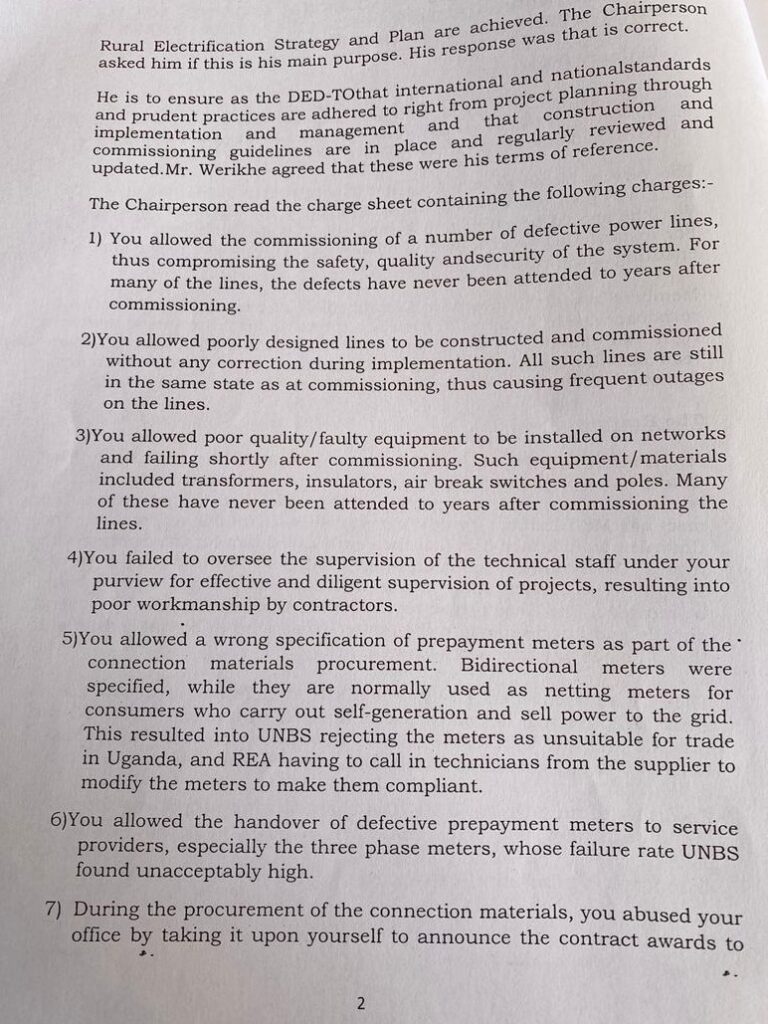 It should be noted that the President had been undertaking his personal investigation of the entire energy sector using a special unit of specifically selected operatives from ISO, SFC and Auditor General’s Office with a special task of identifying the entire circle of corruption in the Ministry so as to have them apprehended and prosecuted. It is on the background of their investigation that the HE recommended the main agencies to immediately prosecute the major culprits. 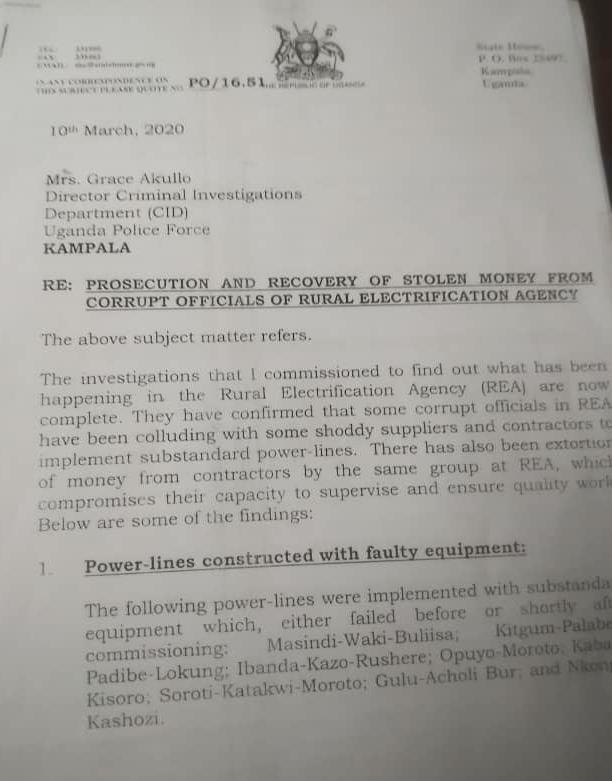 With disregard to the Presidential Directive, it is said the Minister Hon. Kituttu, a University Class of 1987 Bachelor of Science – Geology and Chemistry classmate of PS Kasande; assured him as the Chairman of the REA Board that “their” bread earners (Werikhe and Turyagyenda) will remain in office until when she is no more. This has left the senior members of the board – Mr. Keith Muhakanazi PS/ST and Mr. Ben Kumumanya, the PS Ministry of Local Government tongue-tied because their Board decisions can no longer apply in the face of gargantuan charges against the technical operations team of the Agency. 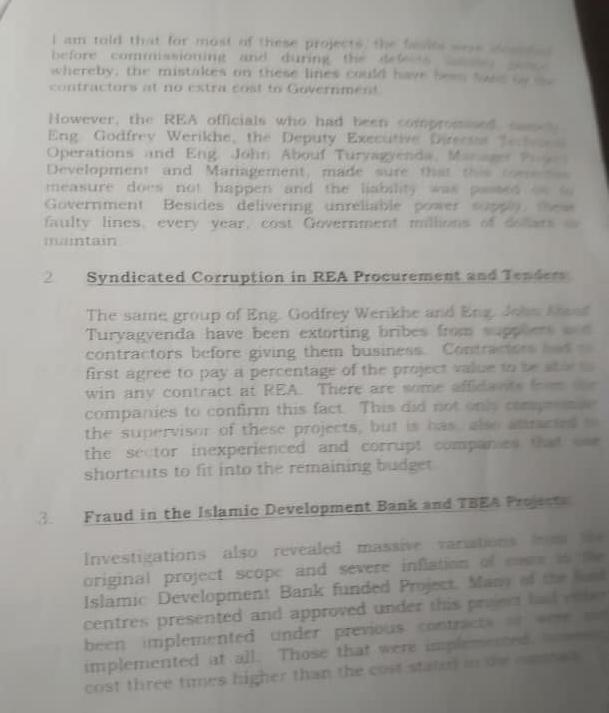 This view was supported by both Amb. Kalibala and Ms. Annet Nakawude who are all experienced leaders in Government and Private Sector respectively. They all felt like the Minister is usurping the Board powers to impose a position contrary to public service standing orders when these two employees have already been found guilty by a plethora of investigating agencies and units. 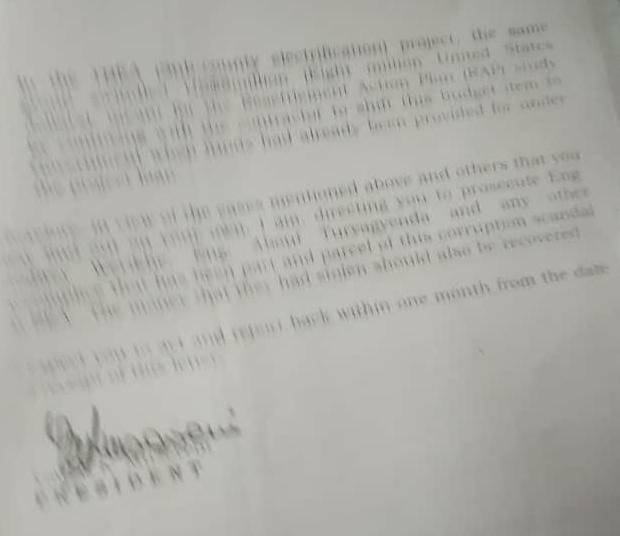 This leaves the country to ponder on who the criminals driving the freshly appointed Minister are because of her inconsistent decisions in total disregard of the appointing authority. Who is behind this mess at the Ministry of Energy and Mineral Development, failing the President to meet his targets of Energy for All or Oil by 2021? Our Energy Mafia series answering these questions continue this weekend as our team has been gathering more evidence.

Below Is Our Energy Mafias series 2 as our team work on series 3 coming anytime..