Trending
HomeBusinessJust In! Another Scandal Hits REA As Energy PS Gives Ill-Advice To Min. Kitutu On Fake Statutory Instrument
In an unprecedented move, the Minister of Energy and Mineral Development has run a riot code onto the Permanent Secretaries of the Ministries of Local Government and Finance, sending them scuttling by sneaking to cabinet one of the most incoherent Statutory Instruments (SI) in the History of Government.

This came as an utter shock to all key stakeholders in the energy sector especially the public which is currently on alert due to the COVID-19 lockdown hence an immediate injunction application by the Centre for Public Interest Law Limited. 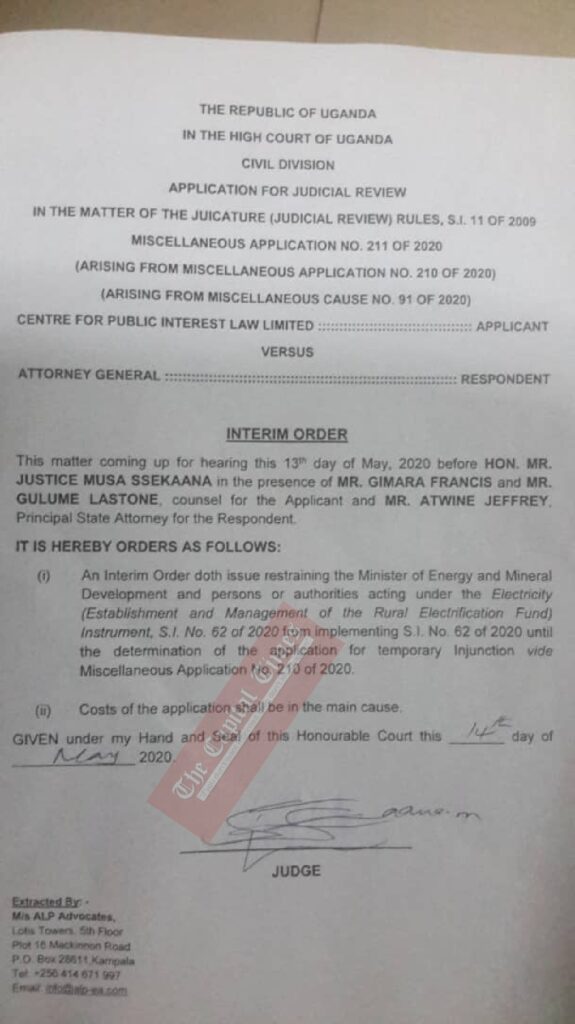 The Minister, Dr. Mary Goretti Kituttu (PhD) is reported to have been angered by the Permanent Secretary (PS) of Local Government Mr. Ben Kumumanya and his counterpart, the Permanent Secretary and Secretary to the Treasury Mr. Keith Muhakanizi who stood their ground and asked the Board to severally punish the highly corrupt Deputy Executive Director of Rural Electrification Agency (REA) – Mr. Godfrey Khaukha Werikhe and his immediate Manager Mr. John Abouf Turyagyenda who were both found guilty for the third time in five years of causing massive losses to Government by the Inspectorate of Government (IGG) in a report submitted to the Board in January 2020.

Hon. Kituttu had requested the Board members to stay their action while she mobilised a small team of loyal agents within the Ministry assembled by her PS Mr. Robert Kasande a 1987 university classmate of Geology at MUK; to design a way out for the implicated blue-eyed boys that she had finally inherited from the former Minister Irene Muloni.

It is reported the experienced high ranking civil servants refused to submit to her ill-founded and corrupt request by informing other board members that they are not here to serve the interests of an individual but rather to protect the interests of Government and in this case Money that is allocated to REA for purposes of Electricity extension.

The PS/ST is said to have stated that it is too bad, the former PS Energy had shielded these corrupt boys from the hand of the law, allowing the Deputy Executive Director to answer to him direct on Technical Issues – a position they had rejected in 2014 although not knowing it was being used to swindle funds while using the Executive Director as a scape-goat as an Accounting Officer.

However, it should be remembered that in the past background the Energy PS as the Board Chairperson had manipulated the members stopping them from charging the culprits and that was the main reason the current cream of loyal technical persons could not afford to be a party to the Minister’s call.

Notwithstanding, the recent investigations by the President of Uganda, General Yoweri K. Museveni have also exposed the massive rot that has been happening in REA after the then Chairperson of Rural Electrification Board Mr. F X Kabagambe Kallisa.

It was discovered that the Board Chairpersons were actually always failing to implement all the decisions by the Executive Director (ED) Mr. Godfrey Turyahikayo because it would mean the mafia cartel not getting any money from the projects as the ED is said to have been requesting for full autonomy in order to have the Government Projects implemented.

The ED is credited by for having spearheaded the 2015 discovery of huge anomalies, but in turn, the then PS and Chairman, opted to send him on forced leave in order to cover up using Mr. Turyagyenda as an acting ED, an act that has gone on to fail the entire energy sector since both Mr. Turyagyenda and Mr. Werikhe have been at the forefront of fake materials in circulation.

Having met severe backlash from Government loyalists who cannot stand to see projects going to the dogs, it is said that the Minister, Kituttu has opted for two options; removal of the ministries represented on the board, and bring people thought to be short on critic while also blackmailing the President by playing a tribal card using Mr. Werikhe as a scapegoat to claim that her region will not be happy when they see her punishing their own spoilt child.

To this effect, the Minister together with her staff, are said to have met with Kallisa and hurriedly drafted a very poorly thought out SI that would effectively remove the Local Government ministry and the Finance Ministry, without regard to the fact that the former is the biggest beneficiary while the latter is the main funder since the REA is one of the biggest financed agencies in the country.

Officials from the Ministry of Energy are further  reportedly to be discussing in murmurs and secrecy but pointing to the compelling evidence that Minister Kituttu is simply a shadow of herself in the Ministry.

According to information received, what is worse is the fact that ever since the highly incompetent PS Kasande came into office, all the decisions in the Ministry are being done remotely by former PS Kabagambe Kallisa which caused untold delays in any action to be done, and on the other hand, decisions made are not for the good or government but rather the benefit of the cartel.

This is coupled with the fact that the Minister is surrounded by a special clique of Kallisa boys – Eng. Abdon Atwiine, a very low ranked officer that has been skyrocketed to an Acting Assistant Commissioner position as a result of his allegiance to Kallisa and Eng. Moses Murengezi, an elderly civil servant with a track record of corruption and theft in the Ministries of Public Service, Works and Makerere University, but was pardoned and hired by Kallisa to the Ministry of Energy under a World Bank Contract as a Technical Advisor to the Permanent Secretary.

It is reported that this team of 3 Energy enforcers of Kallisa – Mr. Kasande, Eng. Atwiine and Eng. Muregenzi – is currently at the forefront of all the illegal machinations that have swallowed Minister Kituttu who has also forgotten her oversight mandate in order to partake on the Dollars with a promise of becoming a political god in Bugisu.

It should further be noted that the Ministry of Energy is currently almost on a standstill because only a few officials are able to interact with the highly aloof leadership of Hon. Kituttu and Kasande.

As a result, highly questionable documents are coming out of the Ministry, key in this being the fact that the same Ministry is on the blink of transferring US $450 Million World Bank loan to a private Company UMEME for the purchase of connection materials.

This is said to be the main contentious issue that could have brought the Minister at the worst terms with the staff of REA and a few other Energy stakeholders who could not submit to the interests of hyena mafias under Kasande.

According to our amicable Sources, It is reported that this could be the reason as to why such a deficient SI couldn’t be taken to the President.

It is alleged that the biggest Shareholder Mr. William Byaruhanga who is Uganda’s current Attorney General could not advise for a better instrument since it would be benefiting his company. 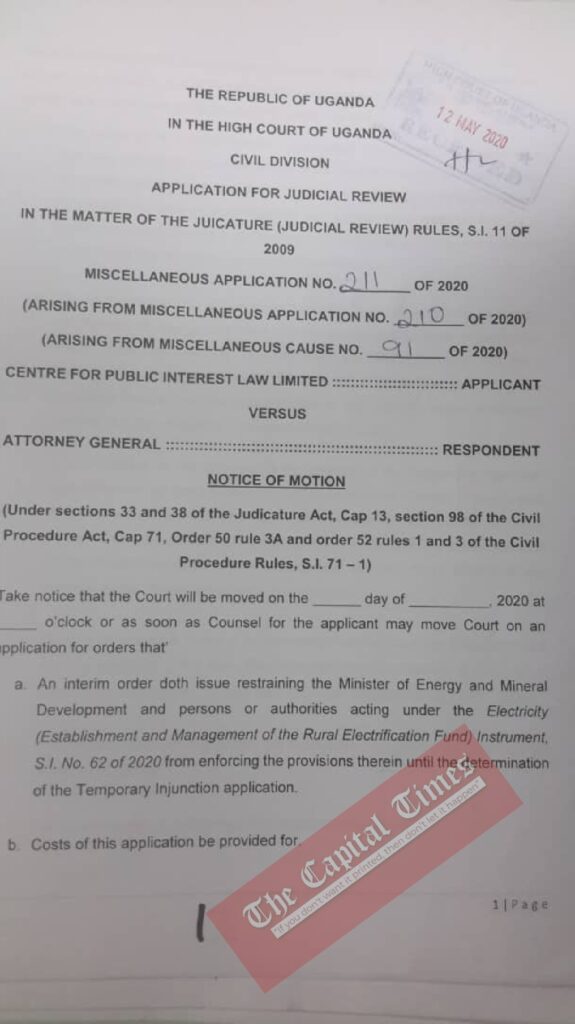 “The act by the Energy Technical team is almost unheard of in the true spirit of civil service. Ministries must work in tandem with each other in order to achieve one goal as the ruling government rather than tearing themselves apart. There is no single way, the energy sector can implement the rural electrification program without the Local Government that is the most singularly affected Ministry since these activities have to be extended to lower levels of government up to the village. It is sheer madness by such a permanent secretary at best and a judgement to hell for his minister because such a key project is doomed to fail since the Ministry will be isolated from contributions and assistance from the experienced sister Ministries of Local Government and Finance,” said a senior REA officer. 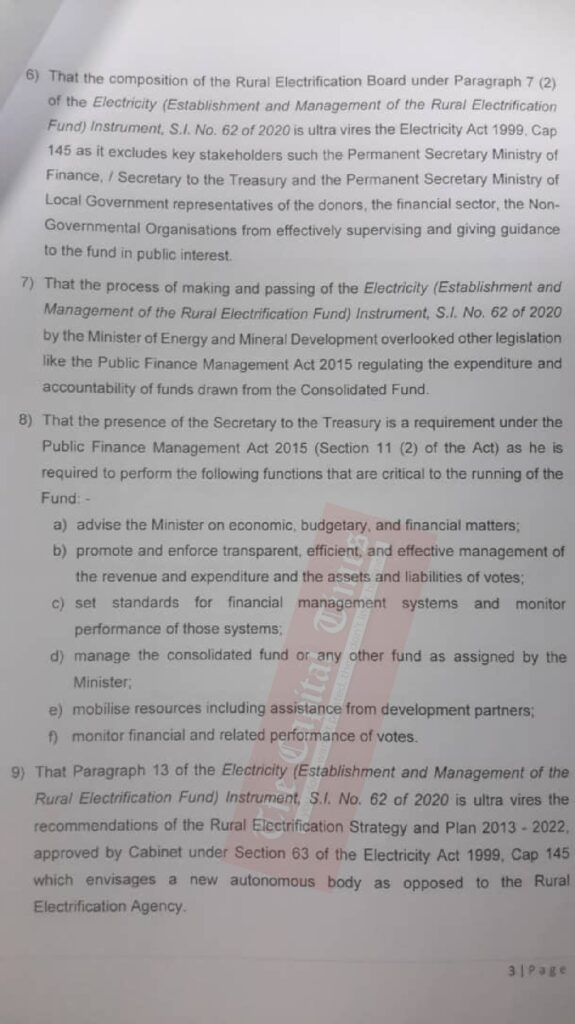 Our investigative team has been informed by a number of stakeholders that there is a lot that meets the eyes in this hurried instrument, the reason as to why the Minister and her PS were able to furnish it with one of newspapers on the basis of the Position of the Chief Executive Officer. 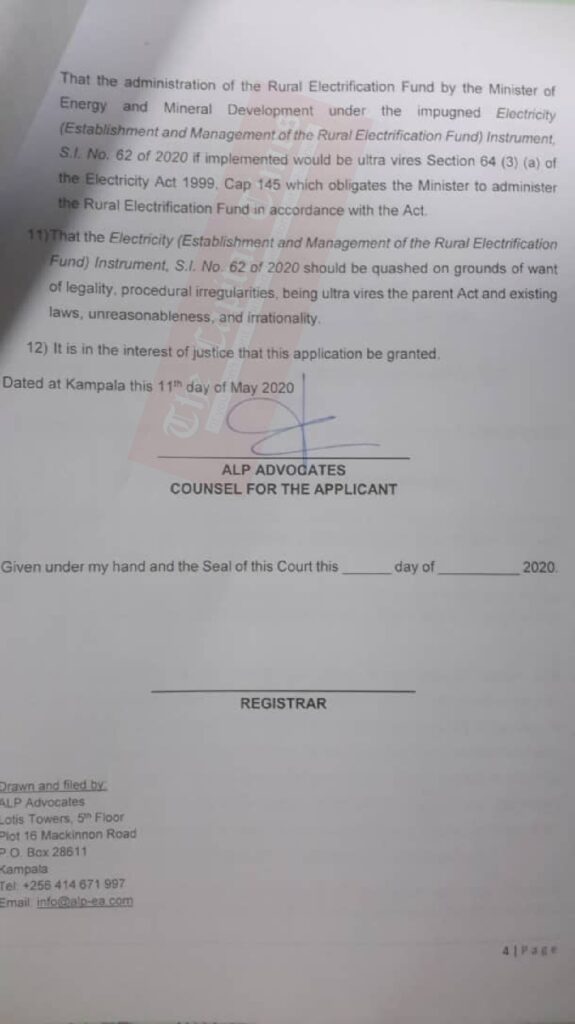 It is reported that there are heavy scores to settle within the Energy Ministry itself but all pointing to the money that would be denied if a member outside the cartel is permitted to stay in the leadership position while bagboys are thrown out.