City businesswoman Mumtaz Kassam has lost a case she filed against a judgement issued by Justice Bashaija K. Andrew on May 29th, ordering her to vacate land measuring 320 acres in Luwero District, which she allegedly grabbed from its genuine owners.

The Uganda police have also since established that Mumtaz and Aggrey  Muhwezi and others still at large forged a Freehold Register land title for contested land, plus several other documents which indicate that they purportedly care takers from the Departed Asians Property Custodian Board, yet the same land already had a Mailo land title.

The land wrangle started after Frank Obrien Wilson a white settler leased 320 acres for 99 years off land located in Luwero district, comprised in Bulemezi, Block 15 Plot Nos. 96 and 97, from the late Mako Kitenda Muwambya, father of Semu Tenwya Musoke (also deceased), in or around 1915.

However, in or around 2013, when Mumtaz realized that the years had passed by and the lease had expired, she stealthily connived with Aggrey Muhwezi plus some mafias at the Uganda Land Board and Ministry Of Lands and managed to acquire forged certificates of title indicating that she had acquired the said land on Freehold vide Bulemezi Freehold Register Volume 2, after which she started demanding the family and administrators of late Semu Tenywa’s estate to vacate ‘her’ land.

She thus dragged the Administrator General, Muluuta Wilson, Steven Mulema, Fiona Mulema, Mako Kyeswa, Samuel Nsozi Njuki and Madiinah Nabukeera, the Commissioner Land Registration to court vide Civil Suit number HCC No. 671 of 2014, but lost the case after it was dismissed with costs.

Justice Bashaija, in his judgment, dismissed Mumtaz’s case with costs of the suit to the defendants.

However, Mumtaz was not satisfied by the Judgment, so she filed an sought a Judicial Review, seeking the Judgement to be quashed.

Justice Bashaija has since issued a decree, asserting that Kalungu Farm LTD has to vacate the land and that their land title has to be canceled and the decree reads in part thus;

“The Suit coming for final disposal before the Hon. Mr. Jutice Bashaija K. Andrew on the 29th of May, 2020 and after reading written submissions of Barnabas Tumusingize and Allan Waniala Counsel for the Plaintiff and Byamugisha Nester, Counsel for the 2nd Defendant, and reviewing the evidence adduced on behalf of the Plaintiff and the 2nd Defendant and applying the law;
It is hereby DECREED and ORDERED that;

The Plaintiff’s suit be dismissed with costs to the 2nd Defendant.

A consequential order does issued directing the 7th and/or 8th Defendants cancel the Freehold title comprised in Freehold Register Volume 2 Folio 8, Bulemezi, registered in the names of the Plaintiff.

The 1st Defendant does cease to have any authority whatsoever on the estate property or any part thereof of the estate of the late Semu Tenywa Musoke under High Court Administration Cause No.66 of 1984.

The 7th and/or 8th Defendants do register the remainder of the estate suit land outside what was already distributed by the 1st Defendant in the names of Muluta Wilson William the 2nd Defendant but not as his personal property but in trust of and for the benefit of any other beneficiaries of the estate of the late Semu Tenwya Musoke. 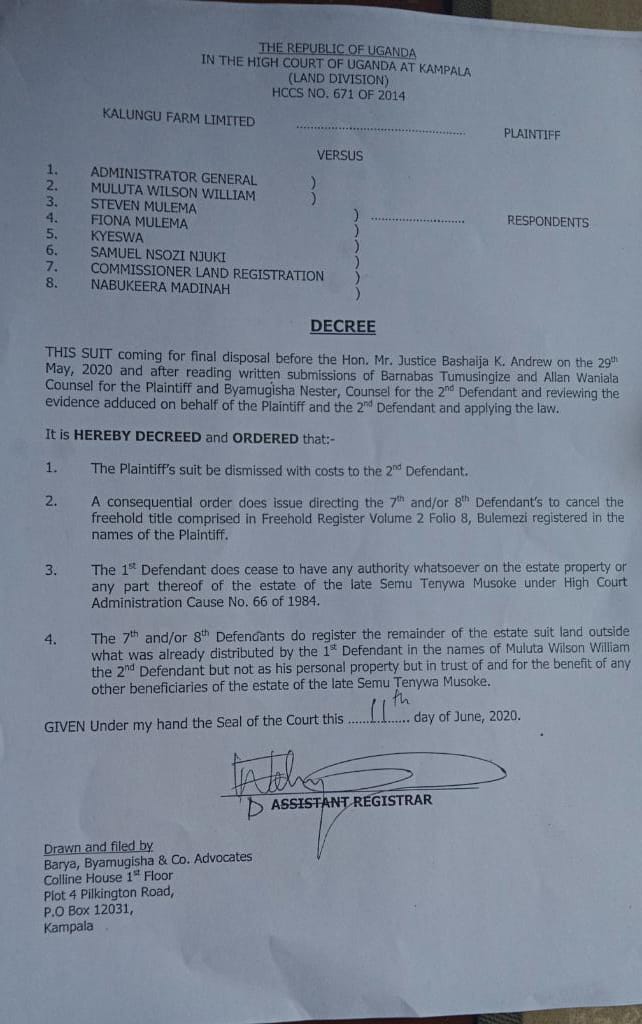 Court Decree on the said land

Meanwhile, during the investigation, the Police discovered discrepancies in documents Mumtaz submitted as evidence indicating that she owns the land and that she had repossessed it from Departed Asians Property Custodian Board.
“There is a document from Mumtaz Kassam through Aggrey Muhwezi her property Manager in form of a Power of Attorney signed by Director Kalungu Farm Limited one Masumali Shariif Mawji of 69 Watergall Bretton on the 9th July, 2014 to Mumtaz Kassam.

Evidence from the police handwriting expert shows that the signature that appear on the repossession letter produced by Mumtaz Kassam & Co Advocates in respect of Property FR V2 Folio 8 to Kalungu Farm Limited dated 26th March 1992 allegedly signed by the State Minister for Finance who was the Hon. Minister Moses Kintu, Ref in LAB No. 470/2015 and the report thereof,” the police state in their investigation report.

They add that “There are discrepancies which need to be ironed out by the concerned people in person….” 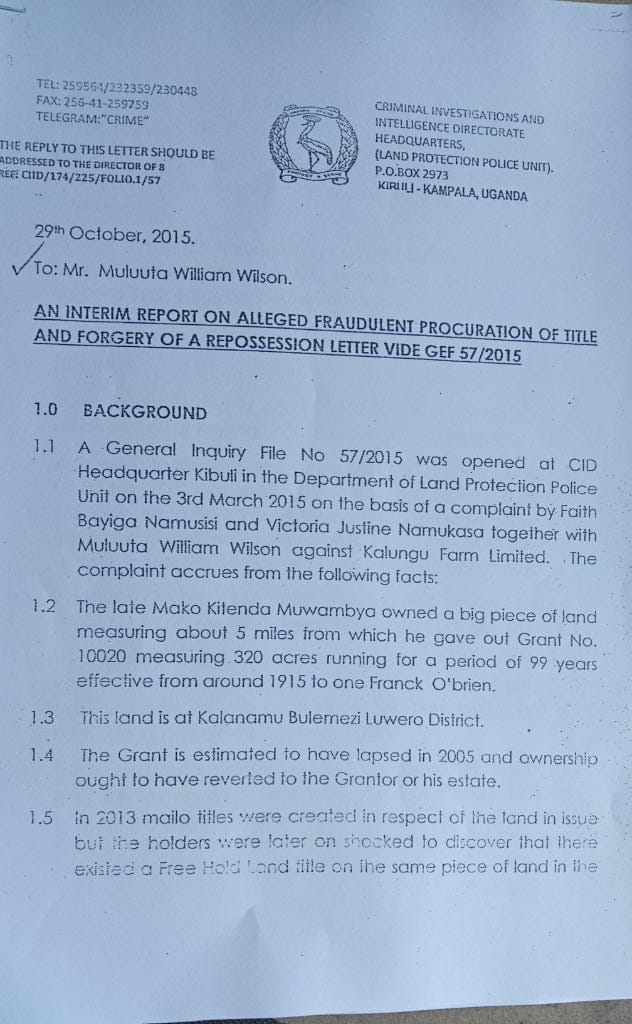 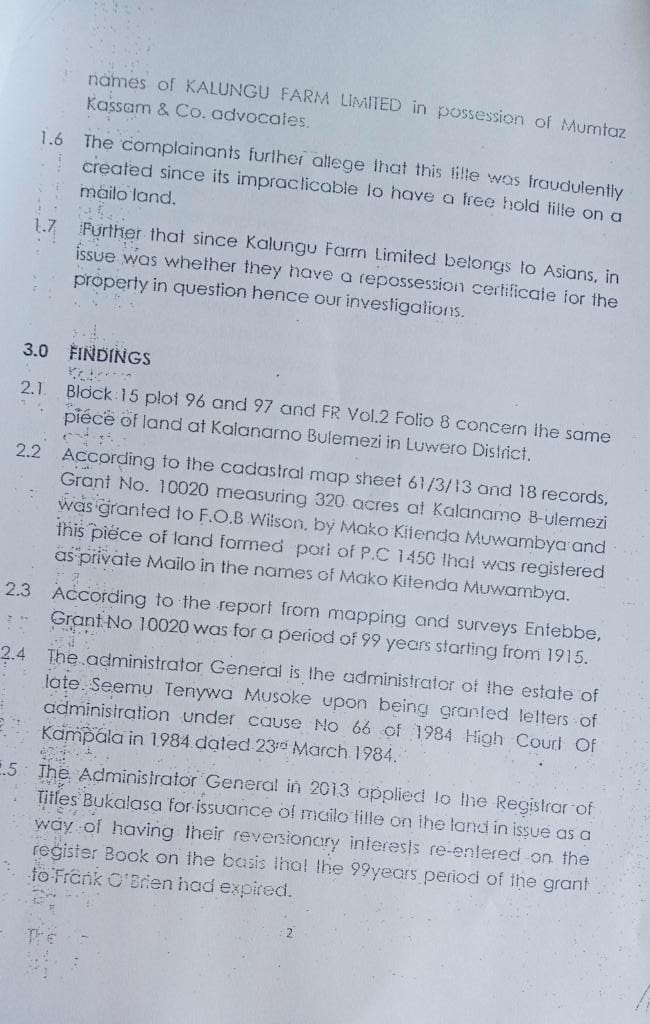 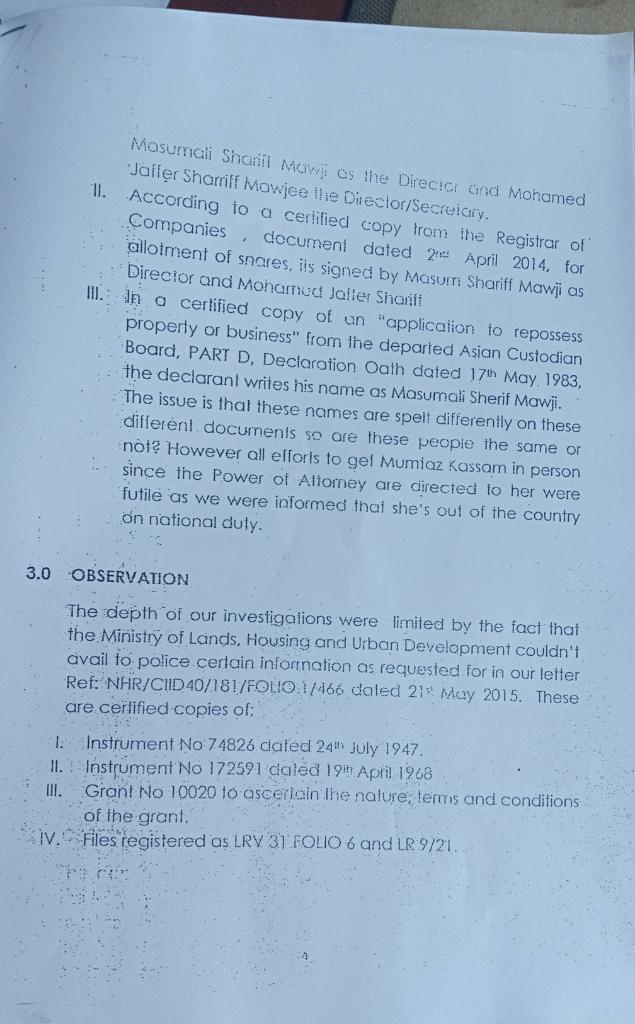 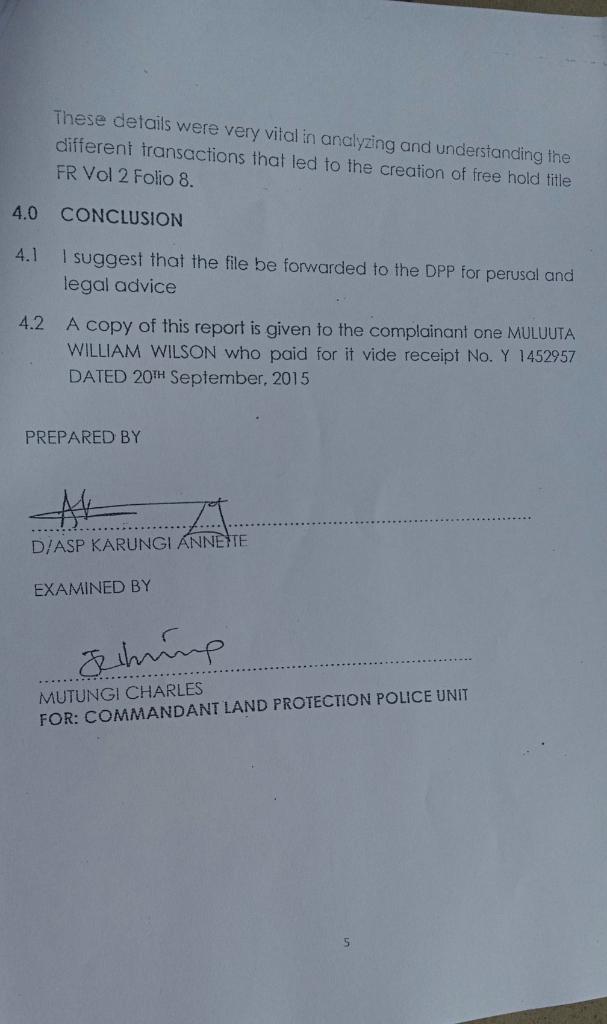