Kampala Socialite Shanita Namuyimbwa alias Bad Black has written a notice to the Attorney General threatening to drag the Ministry of Health before court over an unpaid Covid-19 sensitization advert.

In an intention to sue, seen by this news website, Bad Black through her lawyers of Musangala Advocates say, she was approached by one Ronex Kisembo from Precision Media on April 29 to record a paid advert “sensitizing the public about the dangers of Covid-ig and to encourage the ladies, especially those at borders to avoid indulging with the trucker drivers”, who at the time were main importers of the coronavirus.

“Our client was asked to record a paid advert sensitizing the public about the dangers of Covid-19 and to encourage ladies especially those residents in areas near the country orders to avoid indulging with truck drivers whom the government had found to be the most infected group with Covid-19,” a notice to sue reads in part.

She explains that she was informed the message was to be used by the government to sensitize masses and that she would be paid for it.

“The recorded advert has since been used by the government, aired on various media platforms as an advert sponsored by the health ministry, with support from Precision Media, UNICEF and World Health organization,” Black says.

Black adds that she was promised a meeting with President Museveni with whom they would agree on payments. However, she says she has never met the President nor has she been paid any money.

“The oral agreement made with our client was that a meeting would be arranged between our client and President Yoweri Museveni with whom she would discuss the amount for the advert and payment, a deal to which our client agreed,” reads the document filed by Musangala Advocates and Solicitors on June 12. 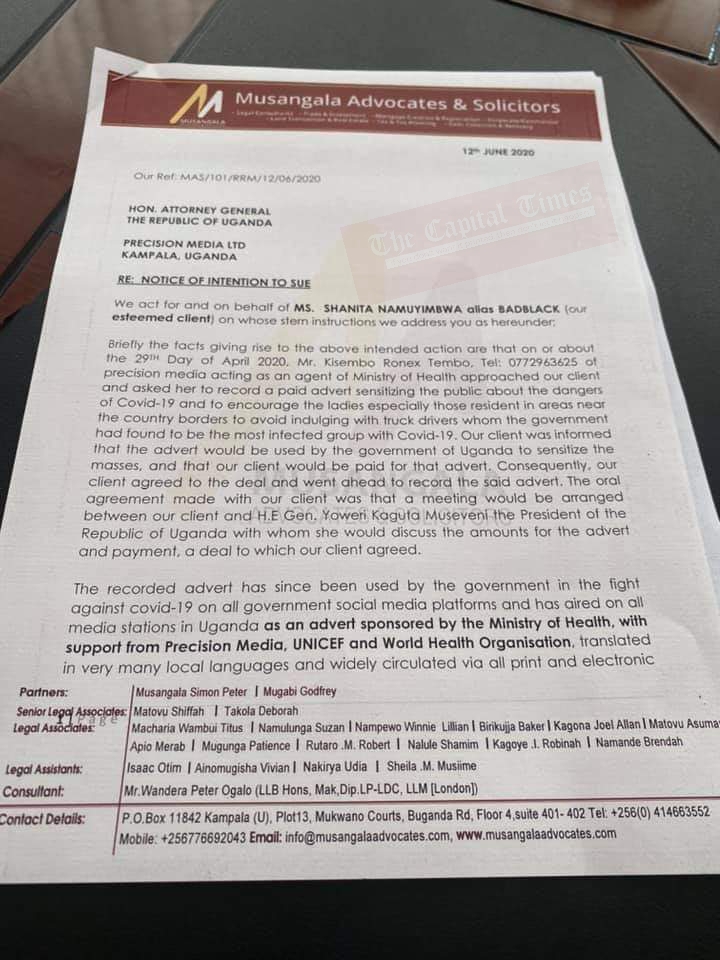 Bad Black now demands Shs500 million for the advert and Shs 50 million for damages and inconveniences in an intention to sue that is addressed to the Attorney General. Government has been given 14 days to respond or be taken to Court.

Bad Black’s lawyers say to date, she has never been taken to meet the president as agreed nor has she been paid any money for the said advert.
“Our client complains of having been used, duped, deceived, and tricked into recording an advert for the government under a false promise which has not been fulfilled.” 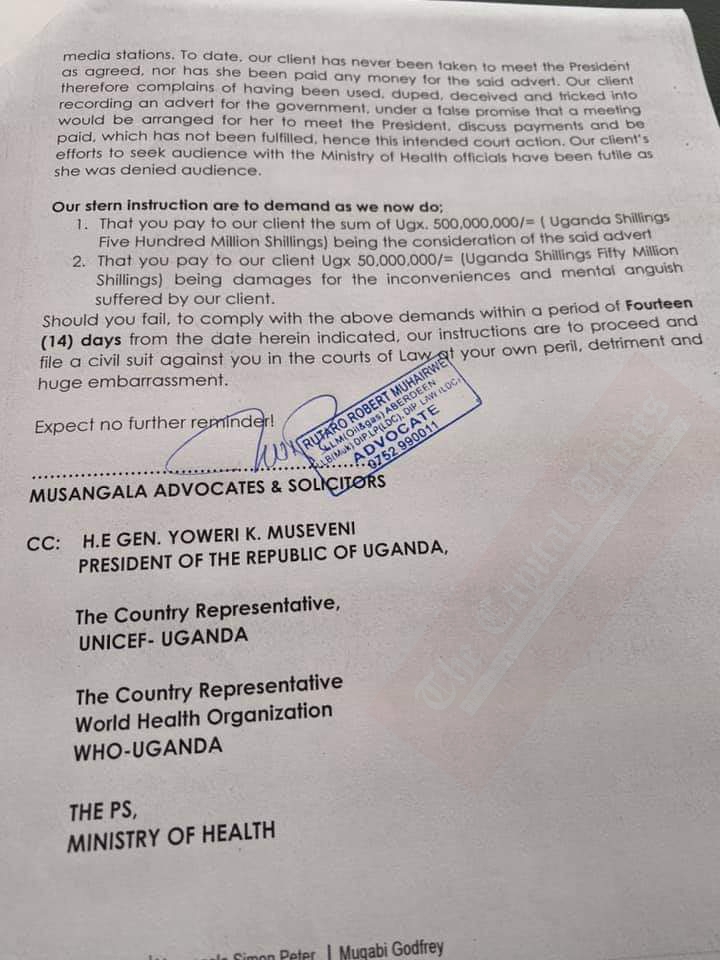 “Our instructions are to demand that you pay our client the sum of shs500 million being the consideration of the said advert and Shs50 million as damages for the inconveniences and mental anguish suffered by our client.”

Those copied in the letter include President Museveni, the Ministry of Health, WHO and UNICEF’s Representatives in Uganda.

According to the lawyers, in case of failure to pay in 14 days, they will be forced to proceed with a civil suit in courts of law.

Bad black later said she had declared ‘war’ and asked government to provide food for all prostitutes as “they no longer work.” She also said she is an “independent hustler” who should be paid.