The Uganda People’s Defence Forces (UPDF) have opened up about the sudden and tragic death of Annet Musumba, the mother of late Lt Andrew Muduli, which occurred abruptly on Thursday June 18, 2020, at Postel Building, in Kampala.

According to the UPDF Deputy Spokesperson Lt. Col. Deo Akiiki, the deceased has been identified as Masumba Annet (76), a born of Wanale Sub-County, Mbale Municipality. It is believed she had come to claim his deceased sons monthly pension payments.

The deceased according to the army was in company of his son a one Wagidoso Wasolo and the two were climbing the steps to access the office but later decided to enter a lift where the elderly woman collapsed.

The army has since refuted the speculation and through the UPDF mouthpiece, a statement pertaining to Musumba’s  sudden death was issued which reads in part thus;

STATEMENT ON THE ABRUPT DEATH OF ANNET MASUMBA AT POSTEL BUILDING-KAMPALA.

“Today 18 June 2020 at 1115Hrs, an elderly woman identified as Masumba Annet, 76 years, the mother to the late Lt Andrew Muduli. collapsed and died instantly in a lift at Postel building in Kampala.T

The building also houses the offices of the Ministry of Defence and Veteran Affairs Directorate of Veterans on the 7th Floor.

The late Annet a born of Mbale district, Mbale Municipality, Wanale sub-county, Busamaga parish, Butandiga Cell, was in company of her son one Wagidoso Wasolo, and a Ministry of Defence staff Mr Apollo Welishe. 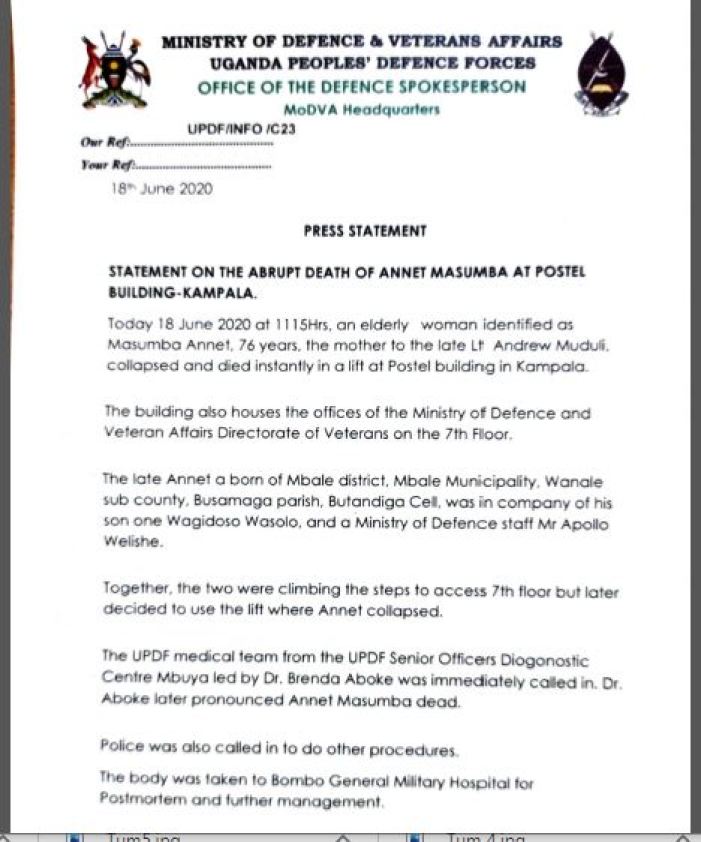 Together, the two were climbing the steps to access 7th floor but later decided to use the lift where Annet collapsed.

Police was also called in to do other procedures. The body was taken to Bombo General Military Hospital for Postmortem arid further management.”

However, the UPDF is yet to reveal what the actual cause of Musumba’s death was and perhaps they are still waiting for a complete postmortem report from Bombo General Military Hospital.

Previous ArticleGovernor Mutebile Warns Of Tough Times As Uganda’s Debt Hits Shs53Trn
Next Article Blame Covid-19, Not EC On Why We Shall Hold Scientific Elections In 2021 – Justice Byabakama