The sector one commander in Somalia Brig Gen Richard Otto has expressed profound gratitude towards Battle Group commanders and troops serving under African Union Mission in Somalia (AMISOM) for their diligent service and high level of discipline observed while performing their duties in Somalia. 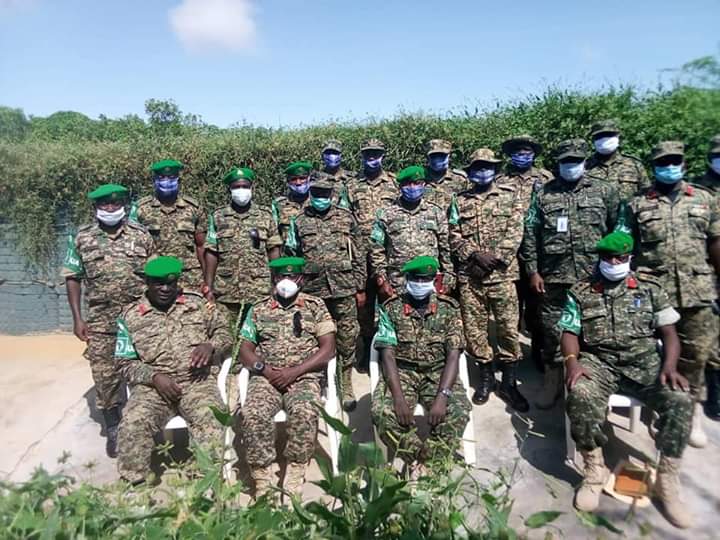 While meeting Ugandan troops at Battle Group twenty-nine (BG XXIX) headquarters in Barawe, Brig Otto reminded commanders that it is their core objective to protect the civilians and their property which is also in-line with the AMISOM mandate.
“I want to congratulate and thank all the commanders together with your soldiers for being on top of the security situation. You have managed to defeat Alshabaab in all ways since I took over, I have never heard of any serious attack in your FOBs (Forward Operation Bases). That portrays hard work and commitment.” said Gen Otto.

While highlighting some of the achievements, he said AMISOM has recently significantly contributed efforts towards recapture of Janaale town, situated 95.8 km Southwest of the capital Mogadishu.
He added that this had been planning centre for terrorists’ operations and other heinous activities against innocent civilians and their properties.

General Otto asserted that Sixty Improvised Explosive Devices (IEDs) and two Vehicle Borne Improvised Explosive Devices (VBIEDs have been destroyed in Barawe since January, which is all attributed to vigilance and combat readiness of AMISOM troops.
He added that AMISOM has also ably mitigated the Covid-19 where he revealed that the only case that was registered among soldiers in the Capital Mogadishu was discharged after successful recovery and no other case has since been registered even in the FOBs.

The General however urged commanders and troops to remain alert and vigilant noting that Alshabaab is still a threat and has come up with new technology and tactics which do not warrant soldiers’ laxity.
He further highlighted that it is imperative to always protect soldiers through searching for IEDs on the roads, regular briefings and debriefs when going and returning from operations.

Brig Otto also implored AMISOM troops to always observe the set health Covid-19 guidelines, aimed at preventing the spread of the disease to or among soldiers.

The General also updated commanders on the security situation back home in Uganda noting that the country is peaceful, stable and preparing for the next year’s presidential general elections.

The BG XXIX Commander Col Edward Kaddu thanked the sector one commander for his support towards the operations. He also pledged continued cooperation with civilians, political and cultural leaders, and all stake holders to maintain peace and stability in the area of operation and Somalia at large.

Col Edward also commended troops for successfully warding off an attempted attack on Barawe Airport by Alshabaab terrorists which he termed as a “mission impossible” for terrorists.