Several Councilors at the Kampala Capital City Authority (KCAA) on Monday June 22, 2022, warmly accepted Hon. Nasser Basajjabalaba’s reappointment on the Kampala District Land Board, which will see him serve for another five years.

The move came after Councilors unanimously approved Hon. Basajjabalaba as a member of the District land board for another term of 5 years at the KCCA Headquarters at City Hall.

He managed to beat his other competitor identified as Richard Birungi, who had also been fronted for the job although he scored zero votes. 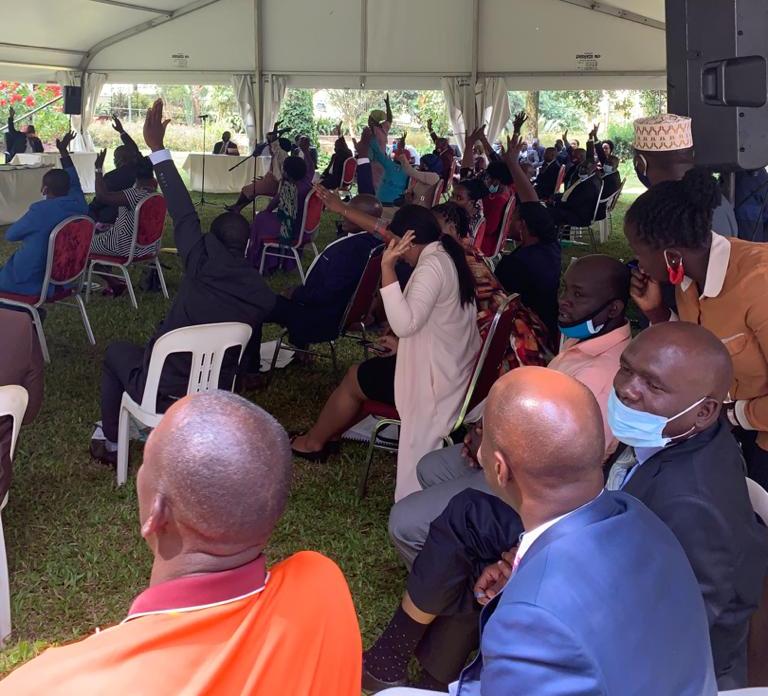 All Councilors hands up voting for Al Hajj Bassajjabalaba

Apart from Nasser Basajjabalaba of Kawempe, the KCCA Council also approved other members on the Land Board who include; Teopista Ntale from Makindye Division, Christine Kyeyune from Lubaga, David Balondemu from Kampala Central, and Joseph Anguria from Uganda Law Society.

Members of Land Board serve for a renewable five-year term and as of April 2020, the tenure of members like Basajjabalaba and Moses Kabega had expired, warranting new appointments. All members were approved without a vote except for incumbent Basajjabalaba who was competing for the position with lawyer David Birungi. Basajjabalaba won with 23 votes against 0 from his contender.

The Land Board includes five members with at least one-third female representation. Each of the counties or divisions must also be represented. As it stands, all divisions of Kampala are now represented except for Nakawa.