We recently revealed on this website how Ahmed Elmajee, the Managing Director of Britania Allied Industries, and his colleague Ali Yousef Ebraik Ohaida, the Group General Manager, are illegally operating in Uganda because they have not yet secured work permits that allow them operate in the country.

Following our first story, we can reliably confirm that Elmajee has since applied for a temporary work permit to allow him operate in Uganda as the Ministry of Foreign Affairs processes his official work permit.

However, we have learnt that although his temporary work permit is still pending approval, our sources reveal that Elmajee is still operating as the MD Britania Allied Industries and hence minting millions of shillings every day, just like the GM Ebraik is doing.

Meanwhile, we have learnt that Elmajee, though posing as the new Company’s MD, Banks have since refused to honor his request to be a signatory on all bank documents, including signing for cheques, or any transaction that involves Bank, apart from the Libyan bank, Tropical, where he managed to manipulate them even when he doesn’t have a work permit that allows him to operate a huge company account like that of Britania.

“He put in his request to change bank signatories to adopt him as well but Backlays (Absa), Centenary and Stanbic banks dust-binned his application. They’re so professional, they all told him that can only happen when he produces a valid working permit that allows him to work and earn in Uganda, “our sources added.

We’ve since cross checked with the Banks, and indeed the bank documents bare signatures of the former MD.

According to Uganda’s laws, a foreigner who wishes to work in Uganda must first seek a work permit from the Foreign Affairs Ministry immigration department before they can be allowed to work.

However, Britania’s newly appointed managing Director Ahmed Elmajee and his mate, the Group’s General Manager Ali Yousef Ebraik Ohaida, our sources at the immigration office confirmed they have no working permits recorded in their names at the ministry that clears them to be involved in any gainful employment in Uganda.
“If those guys are here working, then they’re doing so on their own terms, I guess, not on the Country’s terms, but let’s first engage their Embassy (Libyan Embassy) to get full information about them,” a staff at the immigration department on condition of anonymity told this reporter on Wednesday.

We have further established that Elmajee’s colleague Ebraik applied for a work permit and paid USD1,500 for the same on March 23 2020, but the process has never been completed due to CODIV-19 lockdown, yet the guy is already working and minting millions every day as the company’s General manager.
“We received a notification of Ebraik’s application and payment via online application, but this file is still at the commissioner’s desk, so how do you apply for a driving permit but start driving immediately even before you get the same? What’s the essence of the clearance you’re seeking for then?” A tough-talking staff wondered during a phone interview. 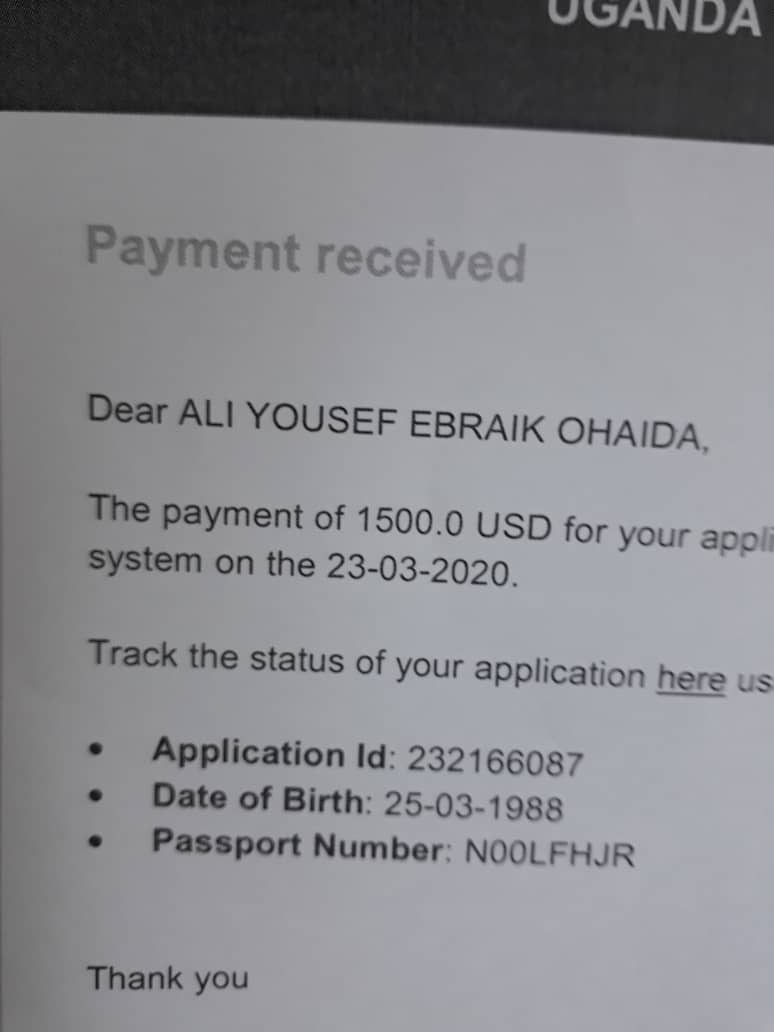 Evidence: Yousef Obraik Ohaida applied for work permit in March 2020 and immediately started working before getting a license

As if minting millions from Uganda without working permits is not enough, workers at the Ntinda, Industrial area based fresh Britania Allied Industries are complaining against their new bosses, accusing them of several ‘unprofessional work ethics’ like rudeness, forced labour, sending workers on unpaid forced leave without any paper work, failure to pay salaries, deducting their benefits like airtime, fuel, over time allowances, fieldwork facilitation among others, without any explanation.

Some of the employees also complain of ‘shuffling’ them with other roles completely different from their initial area of expertise and terms of their contracts.

“One classic example is when he allegedly forced an IT manager identified as Kavuma Ivan, who had been employed to handle network and software related issues, but he turned him into marketer of sorts, whereby he would be required to go to the field, take photos with his ‘kabbiriti’ phone and start running the social media accounts of the company.

When Kavuma told him that it was not his area of expertise, Elmajee harassed him until the guy tendered in his resignation and left the company,” a source confided in this website.
“This guy was so professional in his area of expertise and that’s what his contract entailed, he told him he didn’t study marketing but IT; he was honest, because that’s what the company had hired him for. But Elmajee harassed the guy until he left. 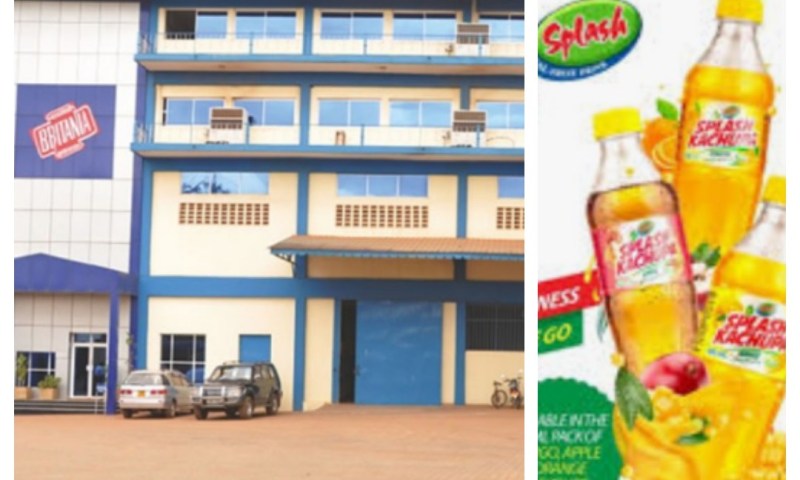 Currently, a whole marketing manager, identified as Norah Male Nambooze, who was hired from Coca-Cola, strategically to think for the company on new marketing strategies, has since been reduced to the level of sitting all day in front of a laptop to update the Company’s social media pages. Just imagine that; isn’t that putting her great potential to waste?” Our source queried, arguing that according to her status, she is the one supposed to be supervising a junior staff running the social media pages instead.

Our sources reveal that during past regimes, Britania’s social media platforms were sub-contracted to a private Company run by Indians, whose role was to gather content and manage the company’s social media platforms. But Elmajee cancelled the contract when he stepped in, and nowadays wants any staff of the company he feels like to run it, irrespective of their expertise.

We have since also learnt that nowadays, Britania workers getting their salaries every end of month can only be compared to milking a bull.
“Every end of month since he came in, getting our salaries is as hard as someone sending you to Nairobi on foot, the guy is simply something else we’re yet to understand, otherwise why should I beg for my money I worked for?” One of the disgruntled employees said.

Although the employees were used to the old management system whereby their salary advances were on their accounts by 16th of every month, as you read this, workers have not yet got their June salary advances, and are not sure they will be paid sooner or even get their full salary at the end of the month, which has created a dark cloud between the staff and their new bosses.

We’ve also established that Over 100 staff workers who were sent on unpaid and forced leave for a ‘short time’ are also complaining that they’ve since refused to call them back to work, and yet no salaries have been extended to their accounts, they’re not sure if they are still employed or not, and yet their utility bills at homes are only surging. “They said we go home for one week, a week has become weeks, now we hear he said we shouldn’t come until he calls us, the question is, when? It’s indefinite,” one of the workers was heard complaining outside the company gate on Thursday morning when security denied them entry into the factory.

In a bid to cut costs in this COVID-19 pandemic, the entire foods production section of the company, which produces Splash, Top-Up sauces, Sun-Sip, Splash Kachupa among others was closed down and keys literally thrown into crocodile’s jaws, leaving over 100 workers grassing, with no idea on when they would resume work.

It should be noted that Britania’s proprietor Dr. Husmukh Dawda sold over 65% shares of his company in Uganda and House of Manji Kenya to late Libyan leader Col. Muamar Gaddafi’s FI Holdings which also run World Islamic Call Society, years before his demise in 2011.

After his fall, a cold war between his former blue eyed boys and those who ousted him has always persisted in most companies IF Holdings and Libyan Gov’t have shares. Managements in most companies keep on changing like baby’s nappies, depending on who has more weight over the other back in Libya, at a particular moment.

In Britania alone, since Gadaffi’s demise, they’ve had over three transitions of leadership. Sometimes, tempers reach boiling points of nearly flexing muscles in the boardroom to the full glare of the staff, many times over failure to agree on monitory sharing. The same is rumored in Tropical bank, UTL to mention but a few, where Libyans have shares.

Workers at Britania who have endured all the three regimes under Mr. Saleh Farag, Mohammed Elzhorgani and now Elmajee Ahmed, say the current regime Elmajee is the most pathetic, to say the least.