The Kasese District Woman MP says she will remain active with the forces of change but will not offer herself for political positions in the 2021 general elections.

“I have continuously talked about overstaying in power, I will not be different if I sought office this time. I know the people of Kasese loved me and wanted me to continue being their Member of Parliament. It’s a job I loved doing because I knew I had the backing of my people had their support. I want to thank you for the support you’ve given me,” Ms Kiiza said on Tuesday.

What Mugisha Muntu said of Kiiza

“She has served not just her constituents but ALL Ugandans with dedication and integrity. Over and over again, I have seen her put country before self in both word and deed. As Leader of Opposition, Hon. Kiiza presided over one of the most inclusive and competent shadow governments we have had. Appointing her to that position was one of my best and easiest decisions,” he tweeted.

The former teacher served as the Leader of Opposition in Parliament from May 2016 until August 2018 when she was replaced by Betty Aol Ochan. 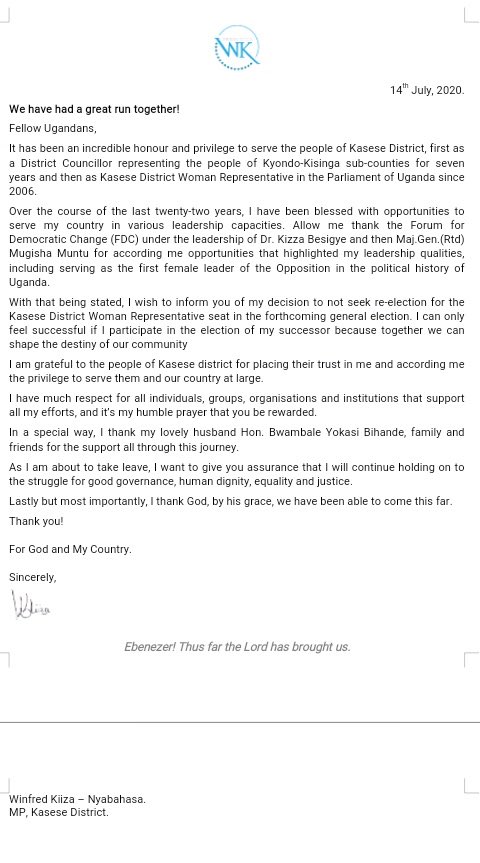 Kiiza was born on November 1972, in Nsenyi Village, Kisinga sub-county, Kasese District, in the Western Region of Uganda. Her mother, Modesty Muke, was a supporter of the Uganda People’s Congress (UPC) political party, while her father, Kanyere Constance Muke, belonged to the Democratic Party (DP). Kiiza’s father died when she was ten years old, leaving her care and that of her siblings in the hands of a single unemployed mother.

Later she attended National College of Business Studies (NCBS), in Nakawa, Kampala, at the time it transformed into Makerere University Business School (MUBS).

Kiiza started teaching at her alma mater, Kisinga Primary School, during the vacation following her Senior 4 examinations. She did the same at Saint Maria Goretti School, teaching there after her A-Level examinations. Around the time Bwera General Hospital was constructed, she worked for one of the contractors, in their stores department. Later she worked for a tour guide company in nearby Queen Elizabeth National Park.

Kiiza’s entry into full-time politics occurred in the 1996 to 2001 political season, during which she served on the Kasese District Local Council as the District Secretary for Finance. In 2001, she was reelected to the district council, serving as Secretary for Education and later Secretary for Social Services. She contested the Kasese District Women’s parliamentary seat in 2006, on the opposition Forum for Democratic Change (FDC) political party ticket. She won and was elected in 2011[5] and in 2016.

In May 2016, Kiiza, at age 44, was appointed Leader of Opposition in the parliament of Uganda, making her the first woman to assume that position in the history of the country.streetjournal