Theodore Ssekikubo (Lwemiyaga), Barnabas Tinkasimire (Buyaga West), Sam Lyomoki (Workers) and Monica Amoding (Kumi) have led a group of 16 Members of Parliament that have sought forgiveness after defying and voting against their NRM party positions.

The group, named “Rebel MPs” for opposing key party positions, like the Constitutional Amendment Bill 2017, which among others amended Article 102 of the Constitution, said they were seeking forgiveness.

“We are here as your sons and daughters. We request you to forgive us and we move on,” said Kumi Woman MP, Monica Amoding, on behalf of her 16 colleagues in a meeting with the party chairman and President, Yoweri Museveni on Wednesday at State House Entebbe. 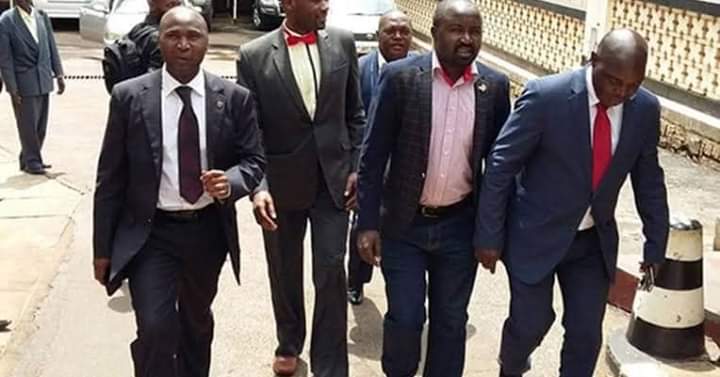 The NRM Chairman, President Museveni, welcomed the members back into the fold, saying he would table their request for forgiveness before the party’s Central Executive Committee (CEC).

At yesterday’s (Thursday) CEC meeting, it was resolved that in order to maintain cohesion and discipline, the party leadership further interacts with the MPs to further guide them.

Emphasizing the importance of unity, President Museveni told the MPs that what should pre-occupy them is the future of the African race.

“The issue we are dealing with is not terms limits or age limits but survival of the African race,” he said, adding, “We do not have a strong black nation like the US, Russia, India, China.”

The NRM party, said President Museveni, had foreseen these challenges, choosing to advocate and work for the survival of the black race.

Politics, said President Museveni, should not be viewed as a job or mere career but rather a service to the people.

“I joined leadership to support black people to survive and prosper. It is not a career,” he said while stressing the need to focus on the four key principles of the NRM party; Patriotism, Pan-Africanism, Social Economic Transformation and Democracy.

He warned the MPs against preaching parochial politics of identity, guiding that they should instead focus on wealth creation for the people.

“Because people are now waking up, we are having a lot of food, sugar, milk, bananas etc. Do not talk about your tribe or religion but talk about prosperity and wealth creation,” he said.

MP Ssekibubo told the President that the group was ready to support and work with him.

“When duty calls we are here and ready for deployment,” said Ssekikubo.

Tinkasimire, who thanked the SG Lumumba for organising the meeting, said they wanted the NRM party to recognize them and they would in return work for it.

He commended President Museveni for being a father figure and a great leader.

Rwabwogo reiterated their commitment to work with President Museveni while Dr Lyomoki said their presence in Parliament was due to the NRM Revolution.

“Without your revolution, we wouldn’t be in that Parliament so thank you for this opportunity and please forgive us,” said Dr Lyomoki.