The Ministry Of Health has confirmed a third Covid-19 death as the total registered cases rise to 1,154 since the virus was confirmed in the East African nation on March 21.

Health officials identified the dead as a 67-year-old Nigerian national and a resident of Kisenyi, a Kampala suburb.

“He had symptoms consistent to COVID-19 which include; cough, fever, chest pain and difficulty in breathing,

He’s reported to have first sought treatment from a private clinic before he was later transferred to Kiruddu Referral Hospital where he was admitted and his samples taken. So far, 15 contacts have been listed,” Health officials said. 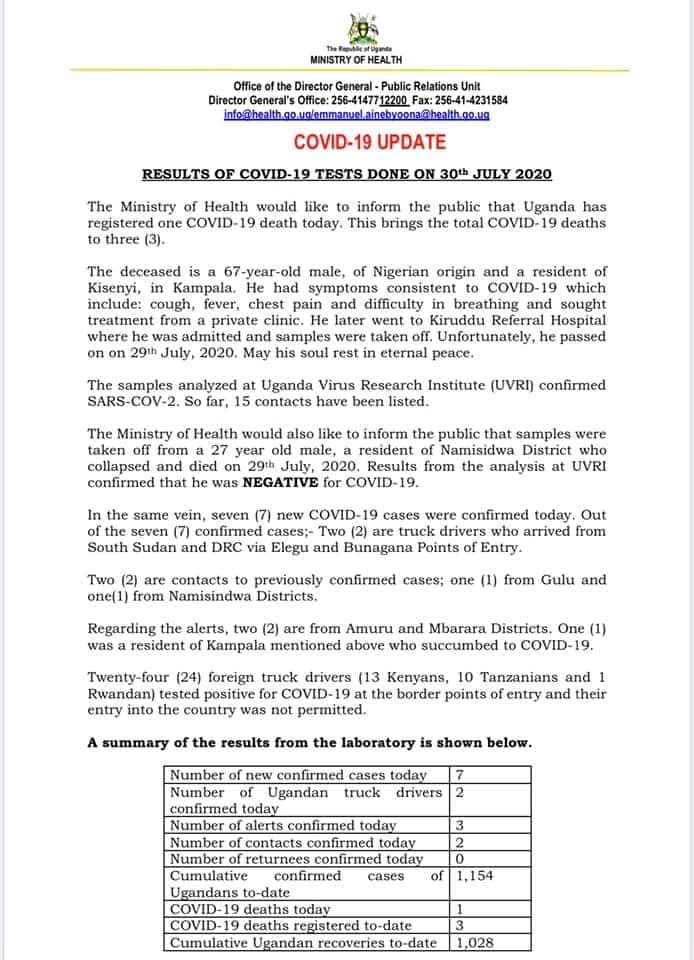 It has been established that seven new infections had been confirmed from samples tested on July 30.

The new infections include truck drivers and contacts to previously confirmed cases.

MoH said samples taken from a 27-year-old male resident of Namisindwa District who collapsed and died on July 29, 2020 had tested negative for the virus at Uganda Virus Research Institute (UVRI).

Twenty four foreign truck drivers (13 Kenyans and 10 Tanzanians) who tested positive for the virus were blocked from entering Uganda.

A total of 1,028 Ugandans have recovered from the virus and have been discharged from different hospitals across the country since the pandemic outbreak was reported in the country March this year.