Members of the DP parliamentary caucus, councillors and other members of the DP Bloc have legitimately  crossed over to the National Unity Platform that is spear headed by  Kyadondo East Member of Parliament Robert Kyagulanyi Ssentamu.

These were unveiled at the NUP party head quarters in Kamwokya among them are Joseph Ssewungu, Betty Nambooze, Moses Kasibante, Allan Sewanyana, Matiya Lwanga Bwanika and many others. 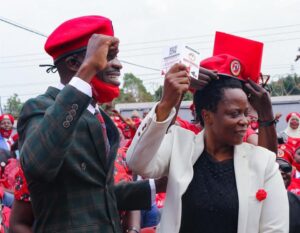 While at the unveiling, the NUP party president Robert Kyagulanyi said that he has been working with these people under the people power movement.

Kyagulanyi said that, “we wanted to be the gum that brings together all the forces of change and we have been working with many of them informally as the People Power and today, they have taken a formal step and together, we are taking on the dictatorship informally.”

The party also celebrated their heroes day where they remembered some of their comrades that lost their lives in Arua two years ago.