For the very first time since March 2020 when the smuggling of Kenyan salt brand with ‘FOR SALE IN KENYA ONLY’ inscription intensified, Uganda National Bureau of standards (UNBS), the Government’s regulatory Agency responsible for enforcement of quality, standardization and assurance, and Uganda Revenue Authority (URA), another powerful Gov’t agency responsible for enforcement of tax compliance among other obligations have finally come out to clarify on the matter.

It should be remembered that in our investigative team unearthed how a cartel of Uganda Revenue Authority (URA) and National Bureau of Standards (UNBS) customs staff connive with smugglers at Busia, Malaba and various porous border points to allow Kenyan Kay, which is supposed to be sold in Kenya into Uganda illegally.

However, in an exclusive interview with One of the investigative reporter Andrew Irumba on Thursday, UNBS’ Executive Director Dr.  Ben Manyindo rubbished the claims that his border staff are involved, and instead blamed it on COVOD-19 SoPs put in place by Gov’t to control the spread of the now global pandemic-Coronavirus.
“You see Mr.Irumba, when the pandemic broke out, we were now required to reduce on our staff wherever we have our presence. Our staff was reduced by 30% everywhere, including where you’re seated to interview me now (at their head offices in Bulindo off Namugongo road). Secondly, even the remaining staff had to reduce on physical contact with their clients, physical interactions were intentionally discouraged for the safety of our staff and the general public, yet trading amongst all the EAC member countries had to continue. This means that we now had to mainly rely on digital platforms to clear goods (online clearance), but as you know every good thing has its own challenges. Online clearance speeds up the processes but sometimes traders use is as an opportunity to either miss declare or under declare goods for various reasons. Traders may intentionally declare that they are passing out sugar yet in actual sense they’re passing out illegal KAY SALT. It’s possible, because traders now know that there is little physical inspection of goods and people by border regulators. I hope you haven’t forgotten so fast that border points have been more susceptible to the pandemic than other places,” Manyindo explained.

Manyindo alleged that his staff members are involved in this illegal trade is a blanket accusation, the only possibility could be that smugglers are using the absence of their staff and those of URA due to COVID-19 to trade in this illegal salt. “When the gate man is at burial ceremony of his close relative and thieves take advantage of his absence to enter and steal, you can’t say the gate man connived with the thieves. No, instead the thieves took advantage of his absence. This should instead inform you of the importance of that gate man! This is the case with our staff, we had to scale down because of COVID-19, but now this gives us a challenge to start thinking of how we can re-enforce our staff, and our colleagues from URA, because we work together,” he added.

Manyindo also revealed that the said salt would be subjected to UNBS’ laboratory test to ascertain its quality and whether it’s good for consumption. “Our primary mandate as UNBS is quality assurance. Normally, under our EAC protocols, all member countries recognize the quality marks of the other members, so we recognize the quality mark of Kenya this salt bears, but since it’s being smuggled, we can’t be sure, suppose it’s a counterfeit product? So we’re taking it to our lab, and on Monday we shall have the preliminary results and will share with you. If it passes the quality, then I will be 50% okay, because then I know that our public is safe in terms of quality, but now the other 50% will be for the dealers to tell us how it enters the country without authorization, and this is also a very big crime, because those culpable can face very dire consequences, including impounding their goods, facing courts of law and facing very very high penalties as a deterrent,” Manyindo explained. 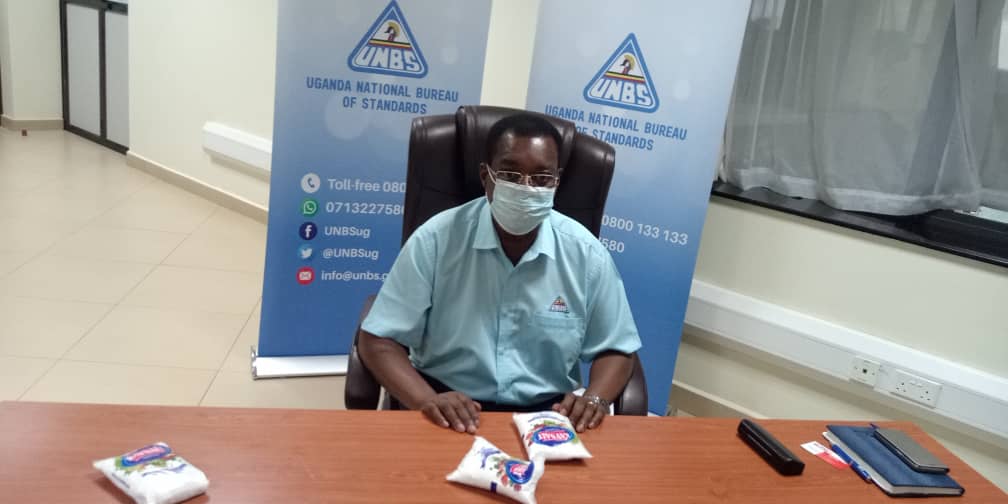 Manyindo explained that cases of smuggling of goods including salt and other products at the borders increased between March and August due to the scaling down of both UNBS and URA staff due to COVID-19 SoPs and other guidelines.
“Our intelligence on ground points to the fact that these illegal trades increased during this COVID19 lockdown period because of the restrictions put in place to secure lives. But we’re going to re-enforce, by end of next month, the story will be different, I will invite you to come and witness,” he said.

Meanwhile, via phone interview, URA’s customs manager in-charge Eastern Region James Malinzi said it’s the Kenyan authority supposed to stop its citizens from crossing with salt that’s meant for their market. As far as URA is concerned, not just salt, but no product can be cleared by URA at the customs without UNBS’ approval, so I don’t understand your claims,” he said.

What Our Investigations Led Us To:

Our investigations team who spent a number of days at the border points three weeks ago and continue to comb the border points even now, recently unearthed a cartel of Uganda Revenue Authority (URA) and National Bureau of Standards (UNBS) customs staff, who are connive to smuggle the said Kenyan Kay salt and other products into Uganda.

This is going on even after President Yoweri Museveni, the commander-in-chief of all the armed forces (CiC) in Uganda cautioned URA officials about the rampant corruption and tax evasion in the country.

Museveni issued the stern-warning in his speech during the commemoration of the June, 9, 2020 Heroes’ Day, shortly after which he made impromptu changes in URA by firing several senior Commissioners at the tax body.

However, despite Museveni cracking a whip at URA, our investigators reveal that there is still ‘Kawuukumi’ weevils especially among customs officials at Uganda’s porous borders, who often connive with smugglers to smuggle goods into Uganda untaxed, which makes government lose billions of shillings in uncollected taxes.

Investigators noted that this impunity in tax evasion is executed under the noses of UNBS, a government agency responsible for the formulation, promotion of the use of, and the enforcement of standards in protection of the environment, public health and safety, and the national tax body, URA which is the overall customs watchdogs.
Top on the list of products being smuggled into Uganda under the watchful eye of UNBS and URA customs staff is Kay Salt, which is marked with ‘For Sale In Kenya Only’, although it has circulated all over Uganda.

Our investigations team on ground tracked it down and saw it large amounts in Eastern Towns of Jinja,Iganga, Tororo,Mbale,Malaba and Busia borders. Big stocks have also been sighted in Kisenyi, Kampala Owino side, William street, Buwama, Masaka and Kasese in Western Uganda.

The same salt has since been donated to the COVID-19 Task Force, but was later intercepted by security agents in Mukono area led by the area RDC Fred Bamwine.
Our Investigative reporters discovered that the importers / smugglers of Kay Salt are earning billions of shillings in profits while creating unfair competition for genuine licensed dealers in Uganda. “They sale their salt cheaper than the official brands, because they don’t pay taxes and other obligations,” a trader in Malaba said.

The investigation also discovered that the salt is smuggled into Uganda in different ways including ‘panya reroutes’ by ordinary bicycle riders and people with disabilities, who use their wheelchairs to carry several cartons a day by making several trips across the Ugandan and Kenyan borders.
It is also smuggled in big trucks that directly drive through the official customs paths after bribing the customs officials manning the ways.

This website has since established that after our reporters busted the cartel and published the stories, operatives from the Internal Security Organization (ISO) picked interest in the matter and have since started investigations into the same.

Our sources reveal that the ISO is investigating circumstances under which over 200kgs of Kay Salt meant only for Kenyan market was donated as relief food items in Uganda.

Fred Bamwine, the Mukono Resident District Commissioner (RDC), said Kay Salt was donated to the District COVID-19 Task Force by an undisclosed Non-Governmental Organization (NGO), and has since picked interest on its source, quality and intentions. “You see the security of a country doesn’t take health matters of its citizens lightly, security doesn’t look at certain issues in a pedestrian way, to an ordinary person this might not mean so much, but it’s different with us as security. Because what if there are other motives behind the supply, like poison? How do we explain that salt entered the country for a full year undetected?” Bamwine said.
According to Bamwine, they (security operatives) suspect that the salt could also have been smuggled into the country through Lake Victoria, but couldn’t rule out other ‘possibilities’.
Bamwine noted that the Food Relief Committee led by the former Interpol Director in Uganda Police Force, Fred Yiga, discovered a seal on the salt ‘limiting its consumption’ to only Kenyans, which prompted them to withhold it as they carry out investigations into how it reached Uganda.

Frank Mpaulo, the Mukono District ISO officer, said intelligence teams have started investigating how the Kay Salt entered in Uganda and was donated to the COVID-19 Task Force, noting that their findings will inform their next course of action in their investigation.
“We want to know since when Uganda became a new district of Kenya, among other details which I can’t delve into now,” said Mpaulo.

From Busia border, our investigators continued to Katosi Landing Site in Mukono District, where Fred Gonja, the Secretary Katosi Landing Site, also decried that some people are smuggling goods into the country using the lake and as a result, they’ve not only evaded taxes and other import duties, but also caused excruciating losses to legal brands on the market as their market sales have since declined by over 60%.
“Sometimes people run out of fuel on the lake and that is when they cross into the country. Many come unnoticed and that’s when maybe even goods can be smuggled by traders,” Gonja noted.

“Yeah, True most of us here at the border (Busia) sale this salt [holds a packet in his hands], since it is smuggled, it is cheaper, so…..we are earning more at least, since we buy it cheaply and sale in different packages and quantities,” a retail shop keeper at Busia told our reporter.

Besides the above, one wonders how these smugglers manage to sneak the salt past UNBS customs staff who are supposed to ascertain the quality of all products (consumable and non-consumable) that are supposed to be sold in Uganda and prohibit those they deem dangerous to Ugandans’ health from crossing our borders.

Our investigations team is still on ground for more details, Watch the space.….