Hon. Stephen Basaliza, who is a retired Uganda Peoples Defence Forces (UPDF) Colonel, has petitioned the Uganda Human Rights Commission (UHRC) to intervene in the eviction of over 500 people from their land and homes in Kiryandongo District.

In his petition dated August 19th, 2020, Basaliza, who is also the former Burahya county MP, contends that the most affected people are those settled on land which shares boundaries with Kiryandongo Sugar Factory, who are being evicted such that the sugarcane plantations can be expanded.

RE: HUMAN RIGHTS CONCERNS IN KIRYANDONGO

During my interaction with the communities of Bunyoro Sub Region it was brought to my attention that over 500 (five hundred persons) mostly elderly and their families are stranded on investors land in Kiryandongo District at place where Kiryandongo Sugar Factory opened fields.

I’m an ardent promoter of investments for the good of the economy and employment.

However, I’m also a Human Rights Defence and want to see how the affected people were settled and compensated.

There should be a balance between the two and the process should be according to the Laws and Human Rights related issues.

They claim of poor living conditions and lack of water points among others.”

He added that; “Raja, the Kiryandongo Sugar Company proprietor says they have no challenges with the community and have good working relations.

However, the Resident District Commissioner (RDC) Kiryandongo says that the people complaining as desperate because they have not been compensated plus other people misleading them.

The purpose of this correspondence is to request you as per the mandate the Uganda Human Rights Commission to do due diligence and visit the affected area and interact with various stakeholders, sensitize and carry out Civic Education to ensure there is harmony.

We need development and investment but also our people need to be catered for more so during this COVID-19 pandemic.

I would be grateful if quick action is taken.
Thank you.” 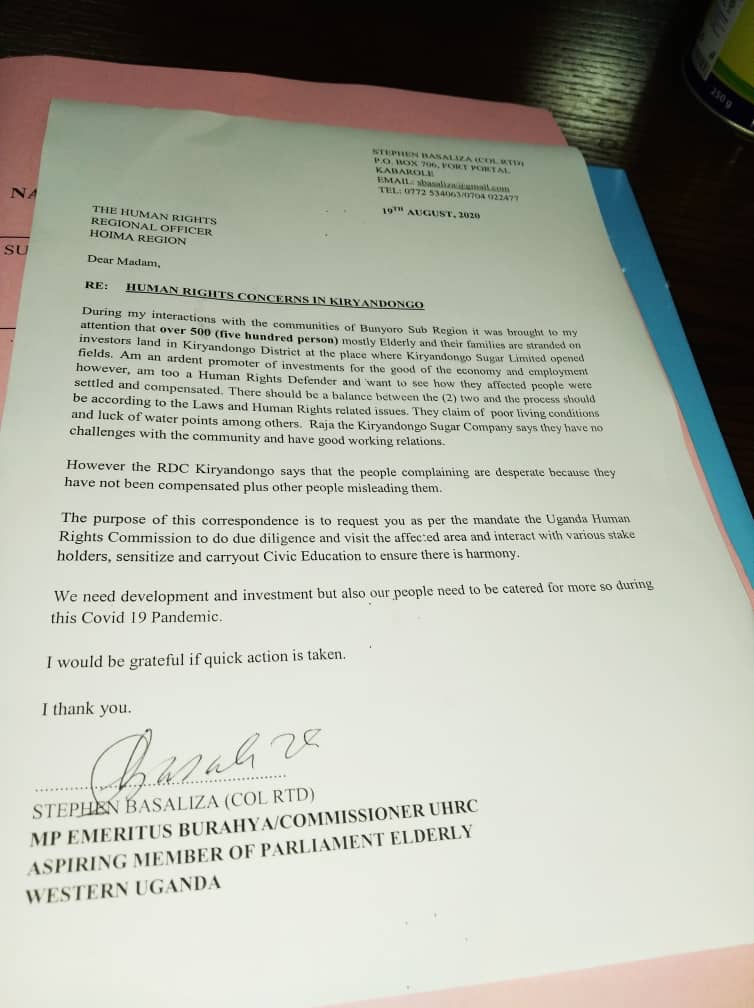 It should be noted that Mr. Basaliza is contesting for the Western Region Member of Parliament for the elderly.

He is a retired UPDF officer, experienced lawyer, veteran politician, who also served as a Commissioner at the Uganda Human Rights Commission a few years back.

He was on Wednesday, August, 19, 2020 officially nominated by the National Resistance Movement (NRM) Electoral Commission chairperson Dr. Tanga Odoi and has since kicked off campaigns ahead of the 2021 general election.