The woes surrounding Annet Katusiime Mugisha, the wife to the National Water and Sewerage Corporation (NWSC) Managing Director Eng Silver Muhisha is not over after another shocking detail emerged about her education.

Ms Katusiime, who is vying for the position of a woman Member of Parliament for Bushenyi district, is facing it rough after a section of concerned citizens  petitioned the NRM electoral commission to block her candidature.

In a petition dated 19, 08 2020 with an intention to sue, the petitioners led by Philip Mugume Murwani, a resident of Kiyaga, Bumbeire sub-county  and Zeddy Kwikiriza, a resident of Rubuzagye village, Kabingo parish in Kyamuhunga sub-county in Bushenyi district queried her level of education to stand as a legislator.

The two, through their lawyers of TAK Advocates and Alaka & Company Advocates, are accusing Katusiime of using and presenting fraudulent and illegal fake academic documents.

In a 14-paged petition, the two are seeking the NRM electoral commission to look into all the irregularities in the academic papers presented by Annet Katusiime Mugisha. 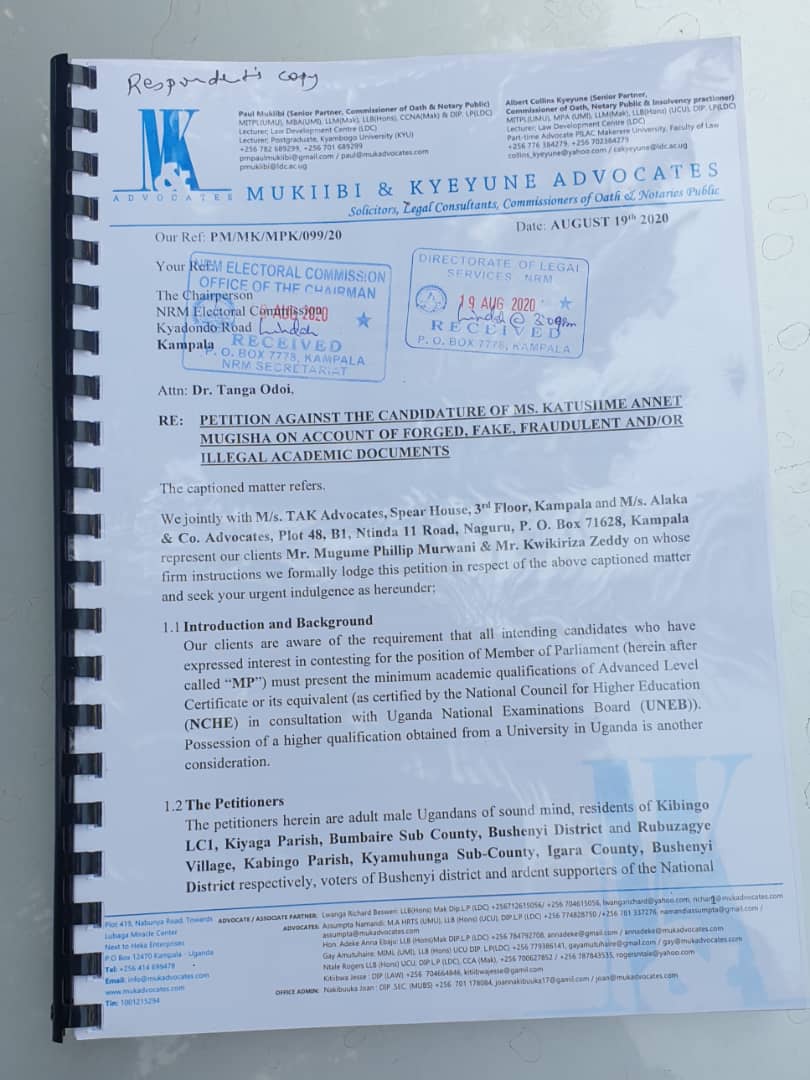 The petition reads in part

They also want the NRM electoral body to scrutinize all the sets of academic documents from primary seven up to the University where Katusiime is claiming to have acquired a degree.

Still in that petition, it says Katusiime who sat for her O’level exams at Kyamakanda secondary school in Rukungiri district in 1994, in 1993, she was studying a Grade III teacher’s certificate at Kyambogo Teachers College.

“…….we request that you thoroughly compare the earlier certificate and the discrepancies in the names, course and graduation dates but with the same serial numbers. It’s inconceivable that the same university could have issued a certificate in favour of a candidate with varying names, varying course, varying graduation dates and same serial numbers…..” reads part of the petition.

However, according to the letter dated 12, 08, 2020 signed by Rev. Dr. Christopher B. Mukidi the academic registrar Uganda Martyrs University (UMU), he said Katusiime Annet Mugisha registration number was 20014-B092-20032.

The letter showed that she enrolled at UMU under the then faculty of Humanities and Social Sciences from 2014 and that she was awarded a Bachelor’s Degree in Social Development and Counselling under the names of Musoga Annet.

By press time, Dr Tanga Odoi, the NRM party’s electoral commission chairman, could not be reached for a comment over the matter.