The President of Uganda Museveni has intervened in a case where Housing Finance Bank is accused of fraudulently selling Widow’s Shs30Bn Estate at just 8Bn.

According to aletter this website landed on, the President has since directed the Managing Director of Housing Finance Bank (HFB) to desist from attaching and auctioning a house belonging to Ida May Kwesiga, the widow of Samwiri Mishambi Kwesiga, National Resistance Army (NRA) Bush war hero.

Trouble hit the bank when Mrs. Kwesiga appealed to President Museveni to intervene in the matter a few months ago after the Bank deployed bailiffs to distress her property which she had staked as collateral security for a long she acquired some time back.

In a president’s September 9, 2020 response letter copied to the Manager Housing Finance Bank and the Bank of Uganda Governor Tumusiime Mutebile, Museveni directed the Bank to allow Mrs. Kwesiga to sell the property herself, such that she can offset the loan remain with some money to start a new life. 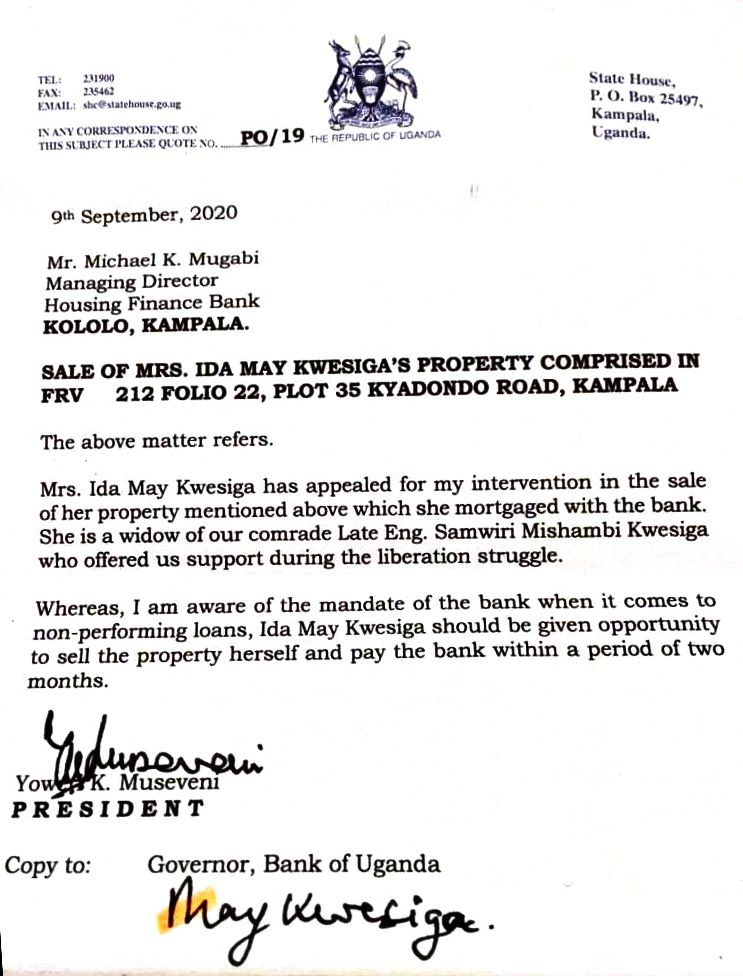 We recently revealed how Housing Finance Bank had been dragged to court over fraudulent sale of city property at Shs8 billion yet the same is worth Shs30 billion at per the current market value and equally revealed the High Court orders Stopping the bank from transferring property that had been fraudulently sold to Balaji Group Ltd.

In the case before court, Kwesiga accuses Housing Finance Bank of fraudulently selling her property along Kyadondo Road, Nakasero in Kampala, to purportedly offset a nonperforming loan.

Kwesiga, who owns Mayflower Apartments, which sit on an acre of land in Nakasero, ran to the Land Division of the High Court in Kampala, where she sued Housing Finance Bank together with Balaji Group East Africa limited.

Kwesiga told this website that she entered into an agreement with the Bank in 2013 to develop her property by erecting the apartments and the Bank approved a loan of USD2.7 million to her, which was to be paid back within 10 years.

According to court documents, the loan facility was secured by property located along Luthuli Avenue in Bugolobi.

“Due to unconscionable terms of payment, the plaintiff (Kwesiga) defaulted and the defendant (Housing Finance Bank) issued her with a notice of default on July, 3, 2019. The first defendant (HFB) subsequently issued the notice of sale against the said mortgaged property on September 9, 2019 and on October, 15, 2019, the first defendant published an advert for sale of the mortgaged property,” the court documents indicate in part.

The businesswoman avers that in November last year, she applied to the High Court to have the mortgage reviewed on grounds that it was given on unconscionable terms, misrepresentation of facts by members and not being given chance to be represented by an independent financial advisor.

She noted that court later issued an order restraining the bank from selling the said property but during the Coronavirus lockdown, the property was sold to Balaji Group East Africa limited.

“The first defendant (HFB) without reissuing default notice, re-advertising or re-evaluating to ascertain the current market value, proceeded and sold the suit property to the second defendant.

The plaintiff has just come to learn that the property was sold to Balaji Group East Africa limited despite having a court order and being aware of the current COVID-19 situation that has affected the entire economy,” court documents continue.

The businesswoman contends that the sale of her property by Housing Finance Bank to Balaji Group East Africa was unlawful, illegal and tainted as fraud.

She contends that by failing to issue fresh notices to her about the sale of the property, failure to re-advertise the property before sale and selling it at a very low price below the market price was fraudulent and wants court to rescind the decision.

Wherefore; “The plaintiff prays for judgement against the defendant for a declaration that the sale of land and property at Kyadondo Road Nakasero to the second defendant be set aside for being unlawfully and fraudulently done.”

However, our efforts to contact the management of Housing Finance Bank for a comment about the matter were futile because they couldn’t be reached through their office lines.

THE NEED FOR BANKING REFORMS IN UGANDA

With the above examples of individuals struggling with the unfair treatment of bank borrowers by the Banks, all hope is not lost as the proprietor of Ham Enterprises, Hamis Kiggundu has come out to suggest some cardinal banking reforms that need to considered if our banking industry is to perform better. Here are some of those reforms;

Revising the structures of foreign banks in the Ugandan economy by employing Ugandans to take some key positions in these banks than having all key positions filled with foreign directors who do not have a clear picture of the needs of budding entrepreneurs in Uganda. We all need to recall that close to 95% of Banks in Uganda are foreign banks.

Put in place systems that protect Ugandan business men and women from being segregated, discriminated and given unfair interest rates on top of delayed loan processing time compared to foreigners doing business in Uganda.

Banks operating in Uganda should have partly local Ugandan ownership in their shareholding with a reasonable number of Ugandan directors that seat at their board of directors with direct involvement in decision making from the top to cater for Ugandan interests as a country.

Control the repatriation of profits by foreign banks to their parent countries which means that Uganda is used as a conduit.

The above reforms are very necessary and need to be given reasonable attention based on reality as expressed by businessman Hamis Kiggundu. On top of the reforms, its high time Ugandan bank borrowers started being protected or else we risk losing jobs and employment that these business men and women provide to Ugandans hence curtailing growth and development