The Chairperson of the Equal Opportunities Commission (EOC), Mrs Sylvia Ntambi Muwebwa has been charged in the Anti-corruption Court amid allegations of tribalism and corruption.

Sylvia Muwebwa Ntambi is jointly charged with other nine officials of the commission, who include: Mujuni Mpitsi, the Secretary to the Commission; Olwor Sunday Nicholas, the Undersecretary; Moses Mugabe, a Senior Monitoring and Evaluation Officer and Byangire Harriet, a Senior Accountant. Others are: Edith Kamahoro, a Senior Personal Secretary; Kwesiga Ronnie, an Accounts Assistant; Jjemba Evans, the Principle Compliance Officer; Kwihangana Manasseh, a Senior Compliance Officer and Sarah Nassanga an Office Attendant.

This website have learnt that Ms Ntambi is accused of superintending over unethical practices that have seen staff polarized along tribal lines, which has created a toxic working environment.

“Yes, the Chairperson Equal Opportunities Commission has been charged with conspiracy to defraud the government. Details about the case can be found in the charge sheet and our PRO can share it,” Natasha Mariam the spokesperson for the Anti-corruption Confirmed. 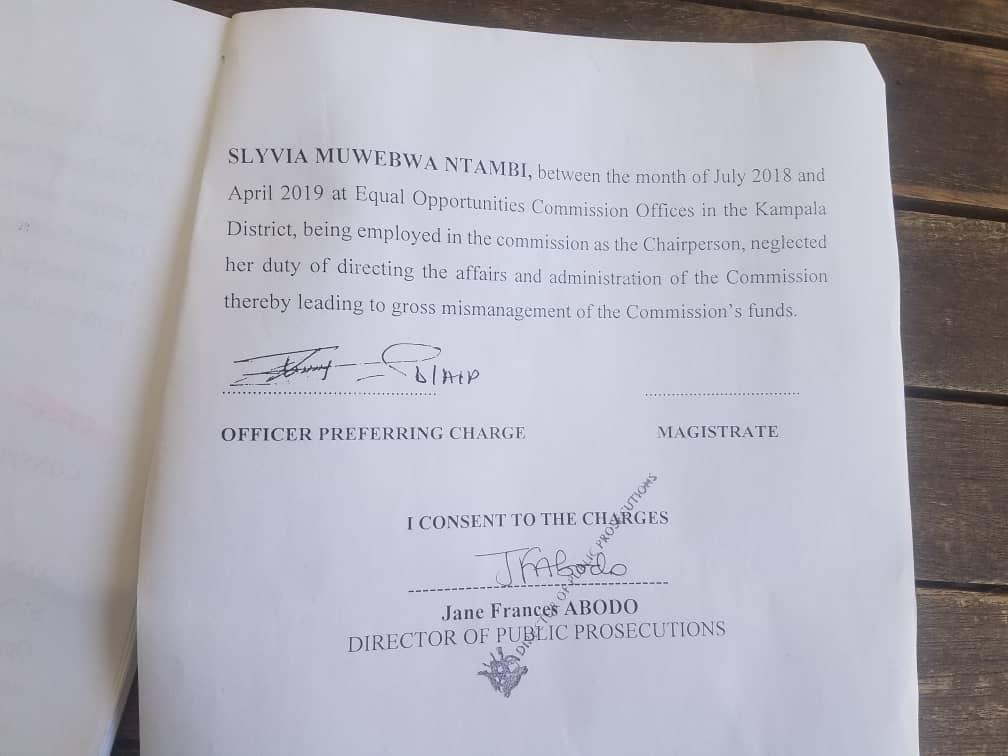 The Spokesperson for the Anti-Corruption Unit further noted that she did not have full details yet by confirmed the development.

“She was meant to appear in Court today on charges of conspiracy to defraud government but did not. Her lawyers who were present in court committed to produce her on 30th September to take plea on the charges,” she commented.

The allegations are contained in a petition by a whistleblower to President Museveni detailing cases of unfair staff dismissal, irregular interdiction, resignations and refusal to renew staff contracts amid allegations of tribalism.

“There is a clear divide between the Westerners and the Baganda. The Westerners are blacklisted, side-lined and fought up to exit. “Some officers who were given the jobs without interviews are indeed very difficult to work with and/or supervise because they belong to the “royal family” of the Commission,” the report reads in part.

It is alleged that Ms Ntambi has been recruiting her relatives and tribe mates without following the due procedures.

It is also alleged that she has been embezzling the Commission’s funds through inflated and non-existent trips abroad, workshops and seminars. The funds came from the government and donors.

In one instance, the petition indicates that in March, she travelled to New York for the Session of the UN Commission on the Status of Women (CSW). For this meeting, she was paid Shs36.8m for 17 days yet the meeting was for 13 days.

Between April 6 and April 16, she is reported to have received Shs27.2m for 12 days of a benchmarking trip in Sweden and Finland, which according to a whistleblower did not take place.

Ms Ntambi has also been accused of using her powers to direct payment of salary advances to herself. There are longstanding salary advances of Shs37.3million paid to her on March 4, 2016, and another payment of Shs40.3m she received on February 2, 2017.

There was also payment in lieu of leave equivalent to Shs13.2million. These payments, according to a whistleblower, have remained unrecovered and unaccounted for since Financial Year 2016/17 to date “due to her domineering instructions”.

Ms Ntambi was not immediately available for comment but while appearing before MPs on the Committee on Commissions Statutory Authorities and State Enterprises (COSASE) on Monday, she begged for more time to read the petition so as to respond.