A Whistleblower has sent a dossier to President Yoweri Museveni detailing all the sins Sylvia Muwebwa Ntambi, who is the Chairperson of the Equal Opportunities Commission (EOP) has allegedly committed during her tenure.

According to the dossier seen by this website, Ntambi is accused among other allegations of promoting tribalism at the Commission, causing government losses through dubious travel expenses and allowances, mismanaging the Commission by running it as if it is her own business, to mention but.

Here below are some of the accusations lodged against by the Whistleblower, whose petition has since been received by the President;

The Petition states in part that; “The Chairperson has created more expenditure lines outside the approved budget so-called ‘Public Relations (PR)’ since the start of this FY 2018/2019. The Chairperson introduced this mischarge at the start of quarter one directing the collection of UGX100 million which they had approved in the Commission meeting. 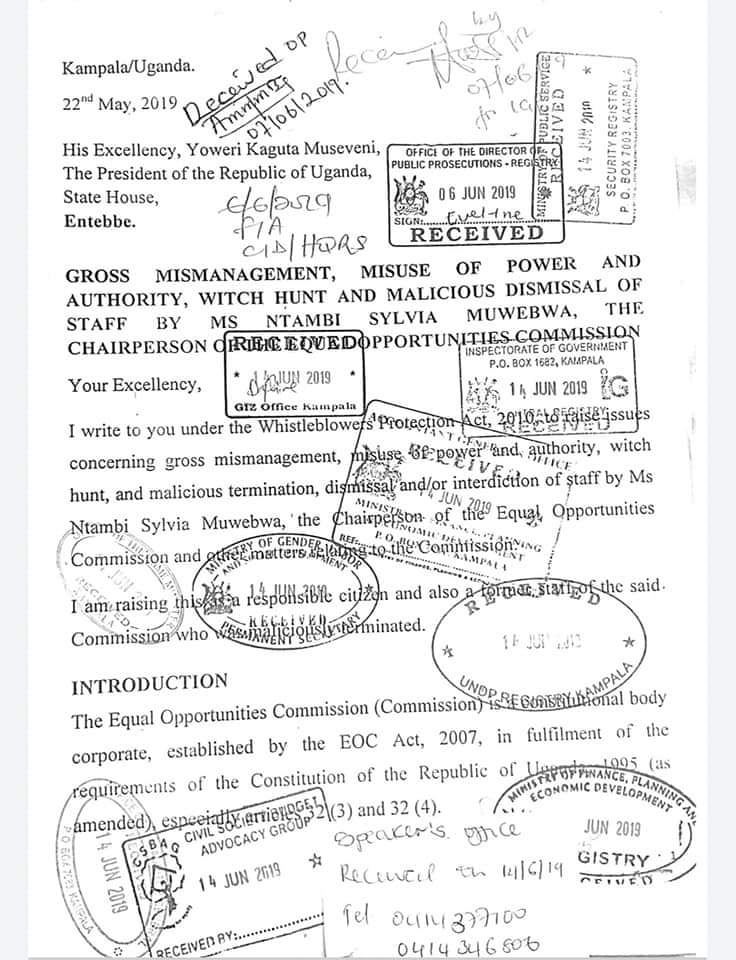 The allocation had not been approved by the Finance Committee because it was not part of approved work plans and budget.

The said funds were to work as a kickback to stakeholders who had approved our budget for the year 2018/19; The same said funds were paid and collected through individual staff bank accounts. Later the same funds were handed over to the Chairperson of the Commission, Mrs Muwebwa Ntambi Sylvia.

This act continued during Q2 and Q3 in which the fund was increased to UGX150 million.

Evidence of Q3 collections indicating the individual employees to whom the funds were sent is as follows:

The above collections relate only to Q3 of FY 2018/19. The hinds were collected, handed over to the Chairperson on 7th March, 2019 at Kampala International University – Kansanga between 5/6 pm or thereabouts.”

The Whistleblower asserts that this diversion denied the Commission opportunity to implement activities as per the approved work plan and budget in favour of Public Relations costs which were never provided for.

“It is obvious that this act of diversion was meant for self-enrichment by Ms Sylvia Ntambi, the Chairperson. This has subsequently caused budget under-performance and a breach of contract with the appropriating body and the public,” the petitioner continues.

He also alleged that; “Despite being a full time Member of the Commission and hence earning a monthly salary, Ms. Muwebwa Ntambi also forces the Secretariat to pay her as a consultant. E.g. the Chairperson was paid UGX 10 million for being a consultant for production of the Annual Report on the State of Equal Opportunities for FY 2017/18.”

Ntambi is also accused of allegedly refusing and or neglecting payment of staff salaries.

The petition states that;

She also lured the then Acting Secretary to the Commission, Prof Sunday Nicholas Olwor to take salary advances of UGX 10,000,0001= on each of the occasions the Chairperson took advance. They have always appeared in the queries of the reports of the Auditor General as long outstanding receivables. Attempts to recover the advances have resulted into threats of termination by the Chairperson.

These are evident on the reports of Auditor general for FY 2016/17, 2017/18 as being long outstanding’ receivables.

The Chairperson directed that payment in lieu of notice of UGX 15,040,4641 to Ms Namunhana Annette the former Senior Human Resource Officer to Jjemba Evans. The said funds never reached the rightful
the intended beneficiary.”

Ntambi is also accused of irregular approval of allowances/benefits to Members of the Commission.

“Your Excellency, in their instruments of appointment, the Members of the Commission are entitled to UGX 2 million of housing allowance per month; UGX2.4 million medical allowance per annum, a chauffeur driven car. For the chauffeured car the Commission provides fuel; the Chairperson gets 4m (while the other members get UGX 2.4m) per quarter loaded onto their fuel cards. The Chairperson and Members irregularly approved for themselves more fuel allowance of UGX 2.52 million per month which is paid to their individual bank accounts. This is never accounted for and is against instructions of PS/ST.”

Besides the allegations of self-enrichment, Ntambi is said to have unlawfully taken one of the Commission’s vehicles which she is using for personal use.

“The Chairperson grabbed one of the Commission vehicles, a Ford Ranger double cabin pick-up, registration number UG 0891B (formerly UAR 670Y). Since September 2017, this vehicle has been used to carry out private business. This is on top of her official allocated car UG 0839B.
The car is driven by an unknown driver, not employed by the Commission. The car has cost the Commission over UGX30 million annually in repair and maintenance,” the petition continues.

The Chairperson is also accused allegedly irregularly recruiting some staff basing on personal relations with recruits instead of merit.

Some of the staff that were regularly recruited include;

Betty Namazzi, who is the Research Officer:
There was no advert for the position, no application no interview; only a minute was produced to have her appointed. She was recruited against no available vacancy in the approved staff structure. Namazzi is a close relative to the Chairperson.

He was irregularly recruited by Zamina Malole, a Member of the Commission, who chaired the interviewing panel. The two have a close blood relationship.

Petua Isabirye Babirye:
She was originally a junior volunteer at the Commission who metamorphosed into a Principal Education Officer. The said officer did not have the ‘requisite ‘experience according to the job description.
The officer is also believed to have a close relationship with Zamina Malole who was the Chairperson of the panel that interviewed Juma without declaring her interest in the matter. Effort by the IGG to trace the reports of the interview have been futile since they were destroyed.

Rajiv Distances Self From Ntambi

Meanwhile word has been going around on some local website that tycoon Rajiv Ruparelia, son of city mogul Sudhir Ruparelia, was the one behind Ntambi’s woes.

The perpetrators of the said allegations purported that Rajiv allegedly fueled the Whistleblower to compile the above petition, as a way of settling a score with Ntambi.

The perpetrators allege that there is bad blood between Rajiv and Ntambi, ever since the latter refused to grant the Ruparelia Group a deal for the Commission to rent office space at their Kingdom Kampala Building.

It all started in 2019 with Equal Opportunities Commission, a government body established to fight discrimination and enforce compliance with legislation on equal opportunities, issuing notices seeking service providers for office space.

Kingdom Kampala emerged the best evaluated bidder in the bidding process. However, on January 29, 2020, the Commission wrote to Kingdom Kampala saying the procurement process was cancelled.

This sparked off a protest from the Ruparelias in multiple letters dated February 11, 2020 and February 10, 2020. On March 2, 2020, the Ruparelias received a letter from the Commission, saying “investigations were made into the complaint” and that it did not find any “justification to make corrective measures as required by law.”

The Ruparelias, according to their lawyer Nelson Walusimbi, “being aggrieved by the decision of the accounting officer consequently made a complaint to the PPDA which found in its favor on the 4th day of June 2020.”

But even then, Ntambi did not go ahead to endorse the deal and opted to procure office space from another company. However, even then, our sources within the Ruparelia Group reveal that Rajiv did not go ahead with pursuing the agreement and moved on with other business.

However, the businessman, who has since distanced himself from the allegations, told this website that he was surprised and shocked to see his name being dragged into the EOC mess, instead of Ntambi and her clique carrying their crosses.