Several investors in Uganda are crying foul and accusing the minister for Lands, Housing and Urban Development Olive Betti Kamya of overstepping her mandate and usurping the powers of Hon. Evelyn Anite, who is the State minister of Finance for Investment and privatisation.

The investors contend that instead of Kamya allowing Anite to carry out her duties amicably, she has instead decided to interfere by coming up with new stringent regulations regarding acquiring and use of government land for investment purposes, which inadvertently likely to discourage very many potential investors.

It should be noted Minister Kamya recently issued a set of new regulations that govern the acquiring of free government land by potential investors the process an investor goes through before mortgaging the land to any financial institution for a loan.

Minister Kamya contends that she came up with the new regulations after cabinet observed that many investors have been misusing the land allocated to them by government by mortgaging it to banks and getting money which they do not invest in projects for which the land was allocated them.

Kamya recently issued a statement about the matter which reads in part thus; “In consonance with the Government policy of a Private Sector led economy, the Government embarked on a vigorous program to attract investors through various incentives and one of them was to offer free land to prospective investors who presented business plans that are in line with Government programs. However, there are some investors who have abused this privilege in many ways including selling Government land while others have mortgaged Government land and not necessarily invested the borrowed money into agreed business projects.”

She added that; “The abuse of the privileges by investors defeats the Government purpose of facilitating investments thereby affecting job creation, increase in tax base, and transfer of technology among others. In some instances, Investors have changed land use without notifying Government; in others land remains un-utilized but encumbered putting it at risk of fore closure. Government has therefore approved the Covenants and Conditions for Mortgaging Government Land by Investors as follows:

1. The investor should submit application for investment land to the relevant Government entity with the following:

a) The Memorandum and Articles of Association.

e) The Preliminary Architectural layout of proposed of the proposed facilities.

f) The Documentary evidence of financial capacity to fully use land.

g) The activity schedule highlighting key milestone for the first 18 months duly broken into deliverables for every six months.

h) The written commitment that milestones will be met and where the investor fails, land is withdrawn.

j) Proposed total amount of investment in US dollars.

k) Ability to raise funds to implement the project.

m) Alignment of the proposal with the National Development Plan.

n) The amount and nature of land (acreage) that shall be required for the project.

p) Anticipated impact of the project on the environment. 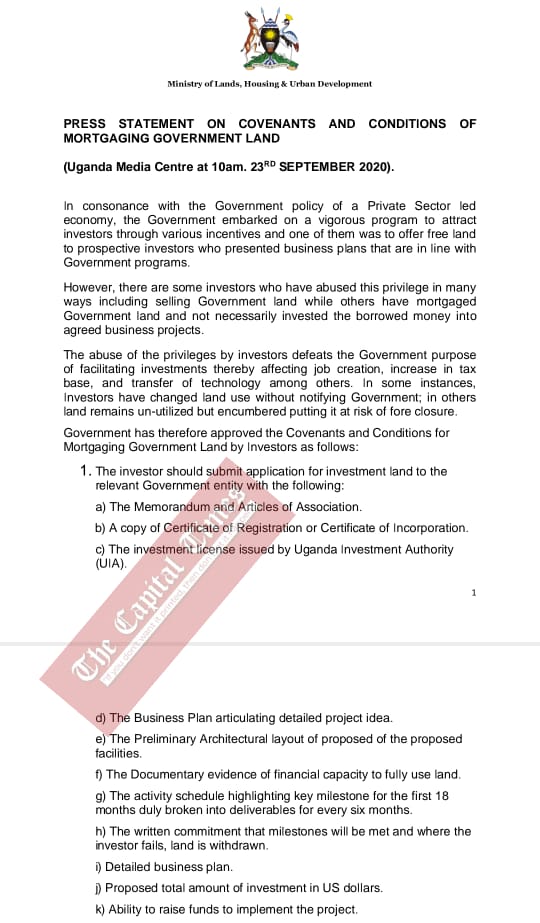 2. The application for land allocation shall be processed by Government through the following steps:

a) The application is evaluated in line with the land application guidelines and an evaluation report is prepared.

b) The application shall be processed in not morethan two months from the date of receipt of the application.

c) A decision is communicated giving a lease offer or reasons why the application was declined.

d) When an offer is made, it should be valid for one month within which written acceptance of the offer must be given to Government by the investor (Company).

e) The value of the land allocated to an investor shall be determined and shall be captured as the contribution of Government.

f) The lease agreement is signed between the investor and Government subject to approved terms and conditions.

g) The processing of the Leasehold Certificate of tittle should not take more than two weeks.

h) No investor shall be allowed to take possession of the land without a signed lease agreement and Leasehold Certificate of Title.

i) Government shall have powers to allocate any land for which a lease agreement has not been signed even if a lease offer has been accepted by the investor.

The terms and conditions shall include but not be limited to the following:

a) No investor shall be allowed to take possession of the land without a valid lease agreement.

b) Any allocation of land for which a lease agreement has not been signed by the investor within a stipulated period shall revert back to Government and will be available for allocation to other investors.

c) The lease agreement shall be signed within one month following its approval by Government.

d) The effective date of land allocation is the day the lease agreement is signed.

e) The investor shall take possession of the land within a period of six (6) months from the date the lease Agreement is signed.

f) The investor shall forfeit the land if possession is not effected within the stipulated period.

g) Possession means starting to prepare the land for the planned development in line with the approved business plan.

In order to Mortgage Government Land, the Investor;

(i) Should possess a valid Lease agreement on the Government Land.

(ii) Should not change land use without consent from the Government.

(iii) Change in land use shall be allowed by the Minister responsible for Lands with approval of Cabinet.

(iv) Government should allow investors to mortgage their property including the lease agreement (Right to use land over the remaining period in the lease).

(iv) For an investor to qualify to mortgage Government land should have invested/ developed at least fifty percent (50%) of the declared investment capital and needs funds for completion or expansion or operationalization of the investment.

(vi) Financial Institutions shall formerly request for consent from Government with respect to mortgaging the right use of the land by the investors stating clearly that they understand the terms and conditions in the relevant legal framework.

(vii) Landownership shall remain with the Government.

(viii) Where the investor fails to pay, the Financial Institutions shall be entitled to take over the lease under its terms and conditions.

(ix) Government shall maintain a register of all approval to mortgage the lease in line with these terms and conditions.

(x) The certificate of Mortgage addressed to a specific financial institution shall be issued within one (1) month after the leasing authority is satisfied that the investor has complied with the covenants and conditions;

(xi) In the event of default by the investor and subsequent foreclosure, the Bank shall notify the leasing authority.

(xii) The Leasing Authority and the Financial Institution shall concurrently source for a new investor on similar terms and conditions of the lease agreement however; the Bank’s choice will be given preference.

(xiii) In case both the Leasing Authority and financial institutions fail to identify a new investor for the same land use, the government may change the land use in accordance with the physical planning Act to attract a new investor.

(xiv) In case the Financial Institution fail to comply with the set Covenants and Conditions, Government shall re-enter the land.

In regard to Foreign Investors

(i) A Land Use Rights Certificate (LURC) shall be issued by Minister of Lands, Housing and Urban Development to the investor in consultation with the Leasing Authority at the time of acceptance of the lease offer;

(ii) In addition to the restrictions to change the land use, an investor shall not transfer, sublease or sub-divide the allocated land except with consent from the Government in consultation with the Leasing Authority;

(iii) Foreign Investors should only be allocated leasehold and not any other tenure of land holding;

(iv) Foreign Investors shall only be allowed to own leasehold tenure;

(v) Foreign Investors should be allocated a first lease term of 49 years but renewable upon expiry;

(vi) Foreign investors to be allowed to mortgage developments on land, they should have invested at least 60% of the investment capital value.

In regard Local Investors

(i) A Land Use Rights certificates (LURC) shall be issues by Minister of Lands, Housing and Urban Development to the Investor in consultation with the Leasing Authority at the time of acceptance of the lase offer;

(ii) In addition to the restrictions to change the land use, an investor shall not transfer, sublease or sub-divide the allocated land expect with consent from the Government in consultation with the Leasing Authority;

(iii) Local Investors shall be allocated leases with no provision of conversion to freehold tenure, and

(iv) A local investor to get a mortgage should have invested at least 30% of the investment capital value.

Lastly, Once a mortgage is processed and granted to an investor, the mortgaged land /or properties shall be published in the Uganda Gazette.”

However, many concerned stakeholders contend that these new regulation will not only discourage thousands of potential investors but also create a very unfavourable environment within the Uganda Investment Authority (UIA) and amongst all investors, since they aim at frustrating their mode of operation. 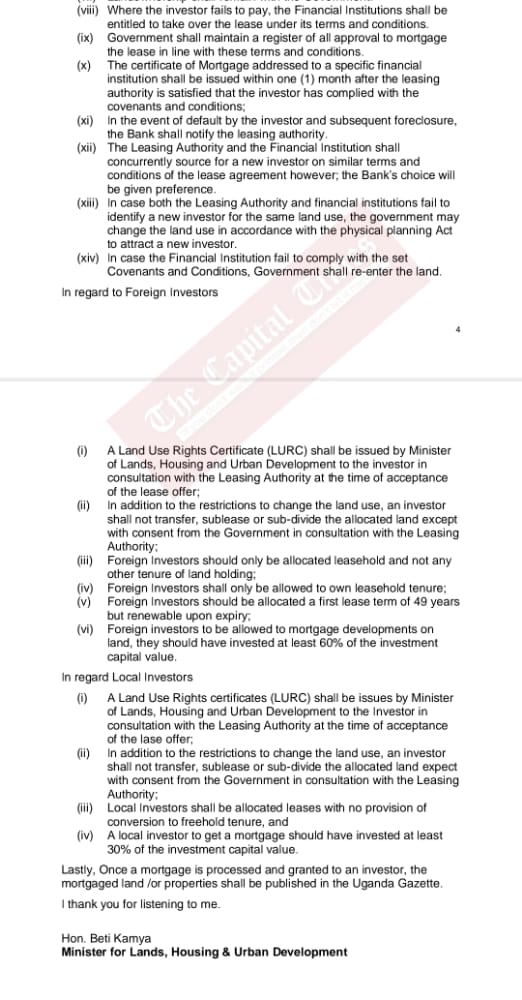