Officers at the Kampala Capital City Authority (KCCA) have been pinned in a multibillion scam, in which they are alleged to have siphoned over Shs8.7Bn from the Authority, which is unaccounted for.

According to an Internal Audit report compiled by Capital City Public Accounts Committee (CCPAC), which has since been delivered to the Lord Mayor Elias Lukwago, State Minister For Kampala Benna Namugwanya, Minister For Kampala and Metropolitan Areas Betty Amongi and the Executive Director Dorothy Kisaka, the officials that are being faulted for having pocketed the billions are those of the Directorate of Engineering and Technical Services. 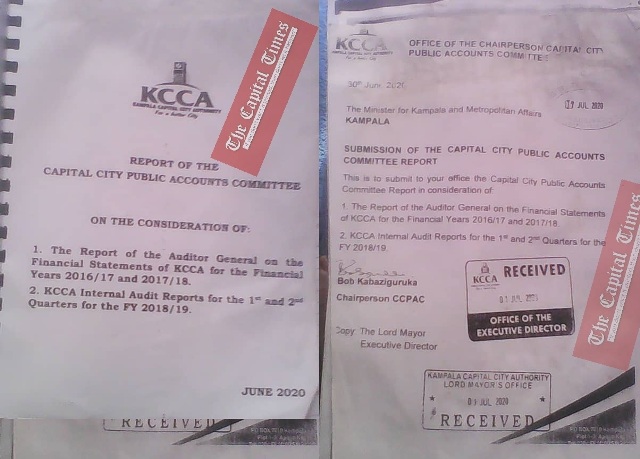 The audit report, which was sanctioned by Bob Kabaziguruka, the Chairperson CCPAC, faults the Contracts Committee and other staff of the Directorate of conniving to cause KCCA financial losses worth billions of shillings through professional negligence, financial leakages, internal dealings and a litany of other forms of shortcomings and abuse of office.

“During the period under review, the Committee observed that KCCA suffered financial losses resulting from professional negligence by the Directorate of Engineering and Technical Services in the implementation and supervision of various activities.

Sample files that were queried by the Auditor General were reviewed and the following observations noted by CPAC;

It should be noted that the variance in amounts on contract prices is money that has never been accounted for to date.

The report adds that; “If we are to assume that the final award price was correct and the initial amounts underestimated, then this brings an issue of failure to deliver on planned activities given that the budgeted amounts are lower that the available funds. In addition to bringing in delayed delivery of activities, it also brings additional associated costs such as interest and penalties resulting from delayed payments.

However, we believe the staff in the Directorate of Engineering and Technical Services has the requisite skills and capacity to come up with reliable estimated (based on the desired designs and quality of roads) therefore the noted variance between their estimates and the final costs incurred was glaring.

CPAC highly believes there was leakage in this transaction and KCCA might not have received the best value for money. KCCA management could not justify why the Directorate opted to use lump sum contracts which gave a leeway to contractors to come up with their own unrealistic quantities and costs yet they had already prepared Bills of Quantities (BoQs) that could have been based on.” 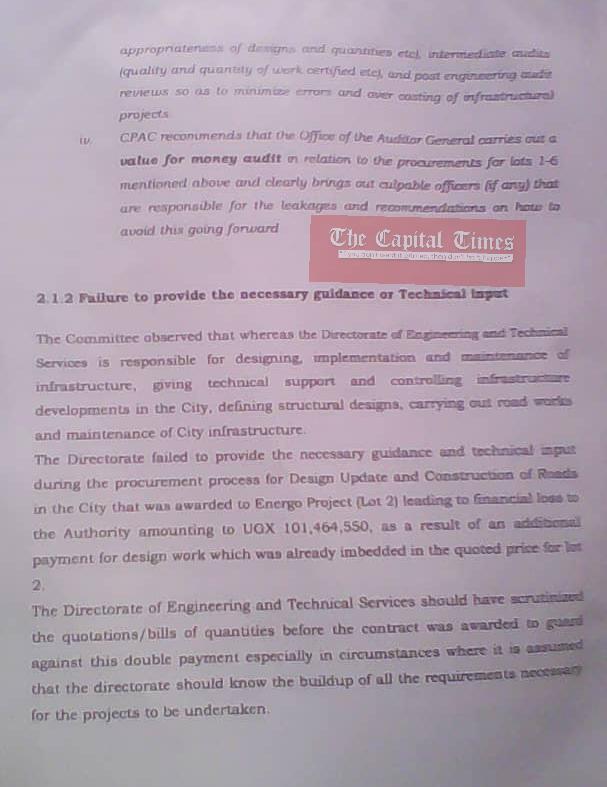 The report continued that; “ From the chronology of the procurement and all the changes from the initial procurement and subsequent changes around these contracts, it is highly probable that KCCA management intentionally worked around the PPDA rules to drastically increase the contract prices through some minimal changes and designs or contract period which information was already known to them and could have been incorporated at the commencement of the procurement exercise.

Estimates on form 5 gives the estimated total costs of the item to be procured and in this case, the estimates provided included all cost elements i.e VAT and Design costs (being a lump sum contract). CPAC does not agree with the explanation given by KCCA management on the variance and actual award prices. It is worth noting that the costs could be reliably estimated from recently concluded similar procurements as clearly indicated by KCCA management.

We note that KCCA incurred double payment for design costs. KCCA had initially engaged design consultants for the same roads but in the contract process, it went ahead and issued design and build contracts to the contractors. There was no value for money.

Due to the adoption of the lump sum contract, KCCA lost over 4 billion shillings which could otherwise have been saved. KCCA has professional and experienced engineers who could have developed realistic BoQs and designs to inform the contract prices.”

In conclusion, CPAC noted among other recommendations that the ‘Office of the Auditor General carries out a value for money audit in relation to the procurement for lots 1-6 mentioned above and clearly brings out culpable officers (if any) that are responsible for the leakages and recommendations on how to avoid this going forward.

The Directorate failed to failed to provide necessary guidance and technical input during the procurement process for Design Update and Construction of Roads in the city that was awarded to Energo Project (Lot 2), leading to financial loss to the Authority amounting to UGX101,464,550 as a result of additional payment for design work which was already imbedded in the quoted price for Lot 2.

The Directorate should have scrutinized the quotations/bills of quantities before the contract was awarded to guard against this double payment especially in circumstances where it assumed that the Directorate should know the buildup of all the requirements necessary for the projects to be undertaken. 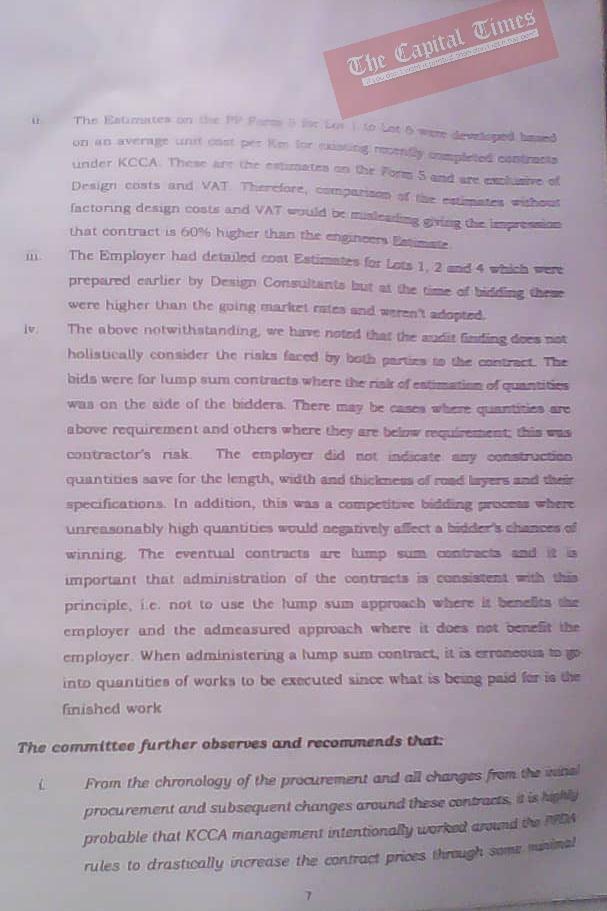 CPA recommended that Management should have these monies recovered since the explanation given does not justify paying separately for the design work which amount was embedded in the contract.”

The Committee observed that a total of UGX 3,780,000,000 was lost as a result of paying for private properties of China Railways Seventh Group under the project for the improvement of junctions. The amounts include surveying equipment worth UGX50,000,000, Laboratory equipment UGX 130,000,000 and a site office UGX 3,600,000,000.

The inclusion of a clause that the items were to revert to the contractor at the end of the contract seemed intentional to disadvantage the Authority given that the head of the Legal Affairs Directorate was the Chairman of the contracts committee who ought to have caught the anomaly.”

Despite the fact that the Accounting Officer observed that both pay items for Survey Equipment and for the Laboratory Equipment had been erroneously included in the BoQs for Works Contract and that the items had not been considered for payment, the Committee observed that payment for the same had actually been executed by the Authority.

The Committee thus deduced that; “Contrary to the assertions of management that they made a cost saving of UGX 4,063,790,428, it was instead a cost increase of 35.49% equivalent to UGX 4,063790,428 for Bakuli-Nakulabye Road in the general requirements and provisions which accommodated the site office.”

The Committee recommended that; “KCCA should, where feasible provide required site offices for future projects from their existing infrastructure. Alternatively, KCCA should buy up the site offices to be retained at the end of the contracts given that in the same case the amounts paid in renting the premises can secure the property.

The Committee also recommended that Contracts Committee be held liable for the loss of the UGX 3,780,000,000 that was overpaid to China Railways Seventh Group.”

The report also faults the Directorate on inadequate monitoring in road construction, which resulted into a lot of shoddy work being done on several of the city roads, yet KCCA had paid billions of shillings to the contractors.

Watch this space for more updates about the multibillion scandals at KCCA in our subsequent reports.