Besides building Nakivubo Memorial Stadium, we have established that Ham is currently on a roll-out of two more projects; one of them is Ham Palm Villas, which is budgeted for USD300m and the other one is Ham Agro-processing industries with estimated capital of USD120M per industry.

According to Ham, since housing and food are two of man’s basic needs, chances of contributing to economic development through investing in accommodation and agriculture is the most viable to do currently, since both investments are longtime ongoing concerns.

The Ham Villas, which is a project in which Ham Enterprises plans to construct 500 residential apartments and villas, is located a few kilometers off Entebbe Road, with a clear view of Lake Victoria.

Construction of the luxury Ham Palm Villas is already underway and almost reaching completion phase such that they can be ready for occupation. 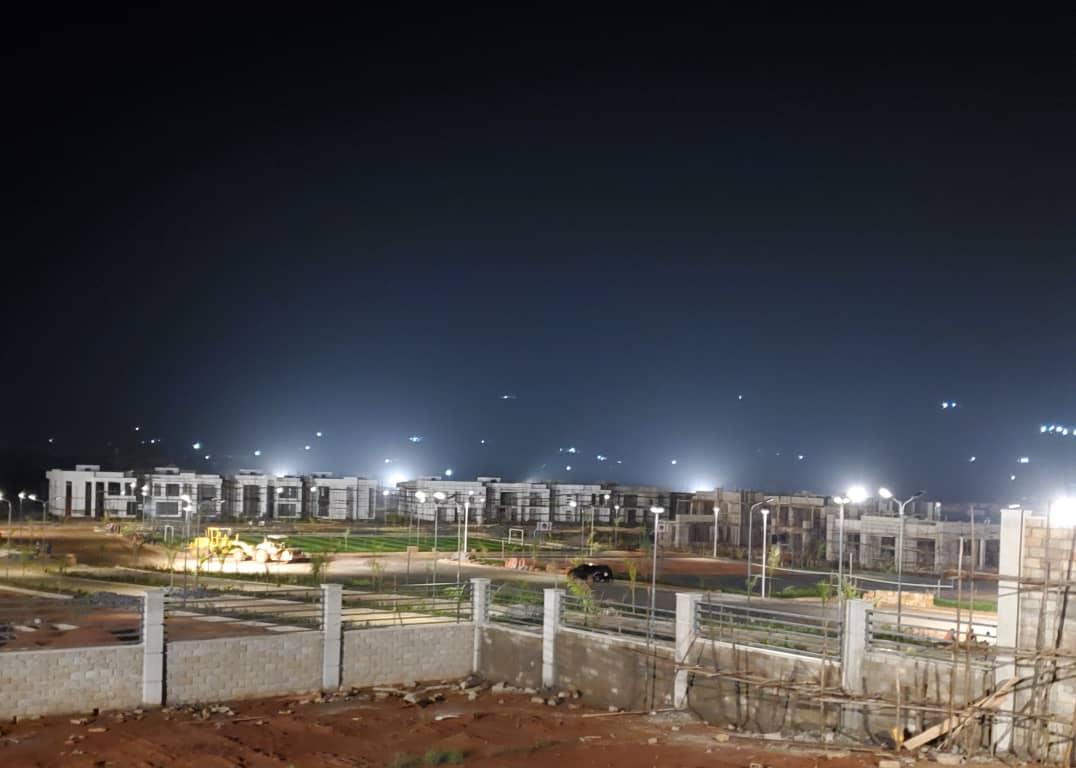 These modern villas are up for sale and each unit is expected to go at USD500K.

The key historical feature about the Ham Palm Villas is the replica of the White House which Ham plans to build in the centre of the residential estate.

The Ham Palm Villas, which are located near a Golf course, will boast of State of the Art Multi-Sports facilities, club house, supermarket, Hospital and Swimming pool among very many others. This will probably be the best residential community in Uganda. 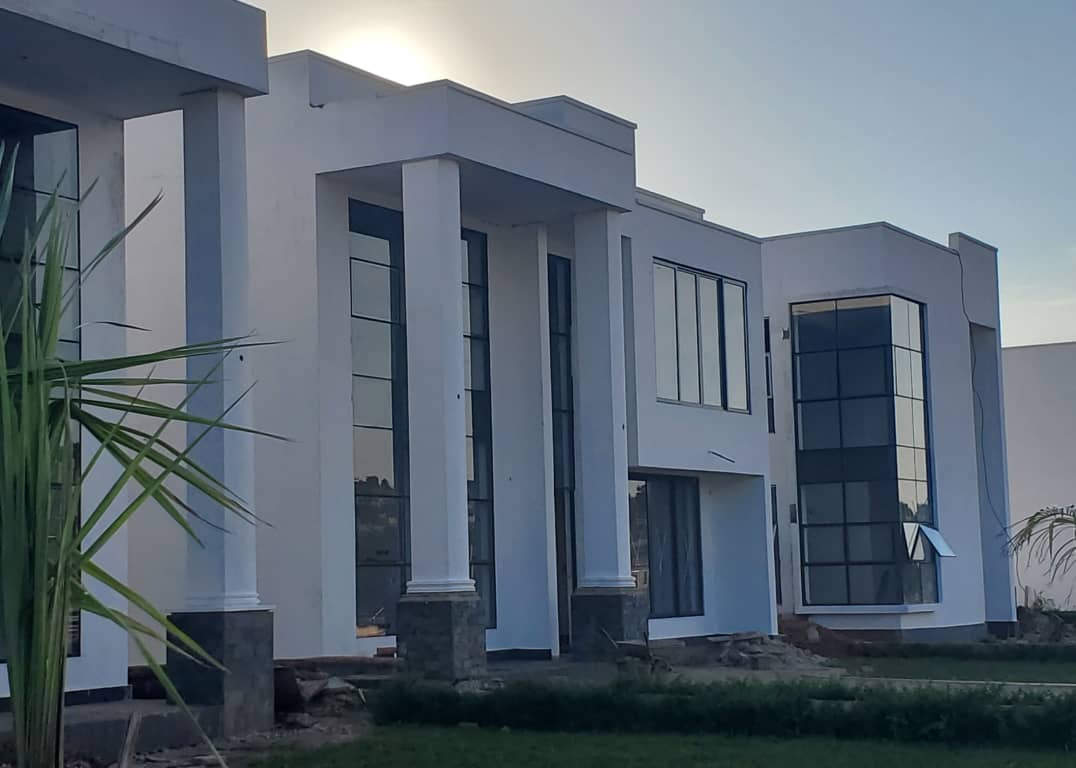 Progress is currently at 70%

“Ham Palm Villas will not just be homes but a lifestyle. We don’t deserve to simply survive but equally live just like others do in developed countries,” Ham said, while commenting about the project.

He added that; “We should struggle not to leave our motherland in search of a better life out there but simply struggle to create what we desire here in Uganda with God’s will as a constant Factor. Uganda will develop, Insha Allah.” 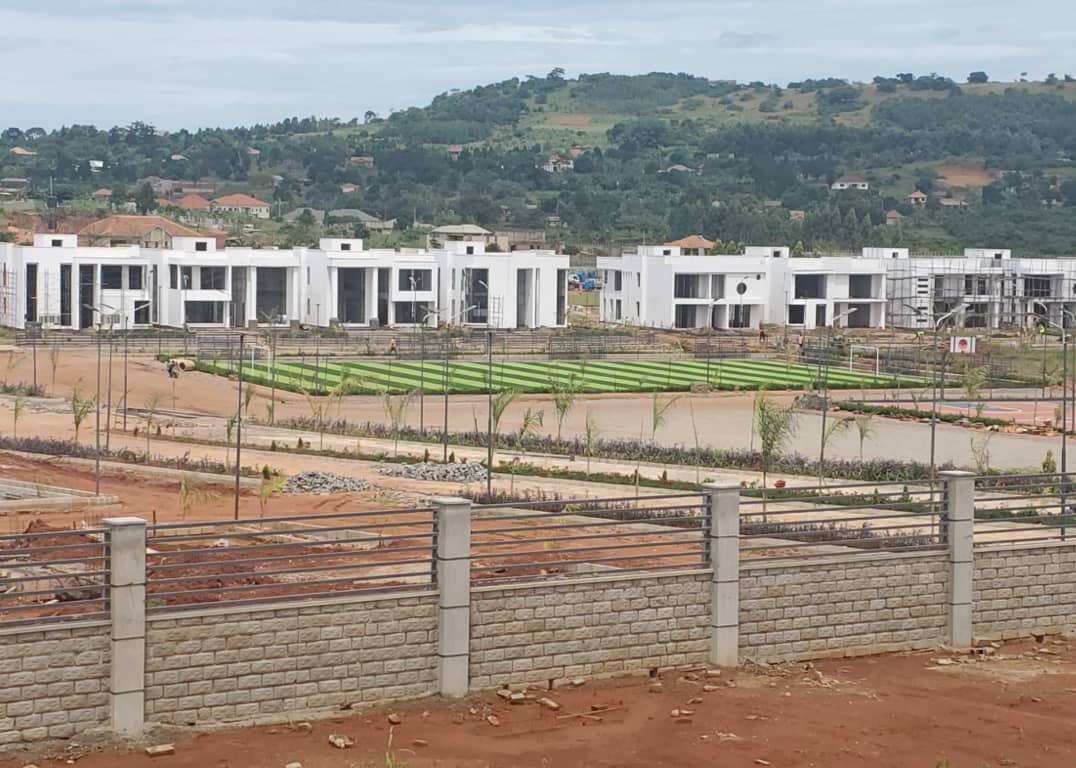 Looking beautiful from this view

Also under the Ham Enterprises projects is the construction of Nakivubo Stadium which is in high gear and the tycoon hopes to have completed the stadium, with a commercial plaza complex around it by Mid next year. After this stadium’s completion, Ham shall officially hand it to the government and he will never collect a coin from it.

Besides the Ham Palm Villas real estate project, the tycoon has since invested heavily in the Ham Agro Integrated Processing Industries and intends, under which he aims at contrasting the agro-processing industries in the 10 regions of Uganda.

The project is being undertaken with an estimated budget of USD120M per regional plant and a value addition of USD1Bn. 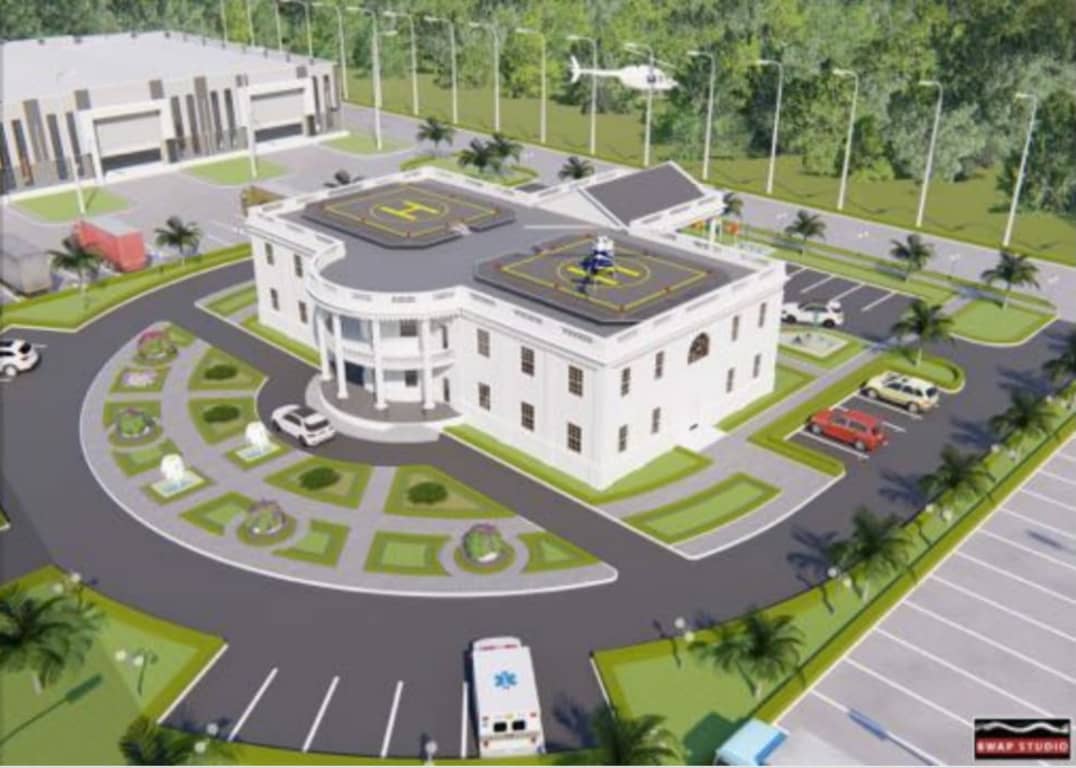 Commenting about the project the tycoon said that; “Ham agro processing industries headquarters construction works in progress. It’s our obligation as Ugandans to develop our motherland based on reason and reality.

We don’t have to leave our motherland Uganda chasing dreams and desires, we can transform our country into what we desire. Why travel to the USA to tour the White House when we can build one right here at home? The agro industry plant will add value to farmers produce, promote import substitution, create demand regionally and internationally through export of finished agro products, increase on farmers’ incomes and widen the tax base in the long run.” 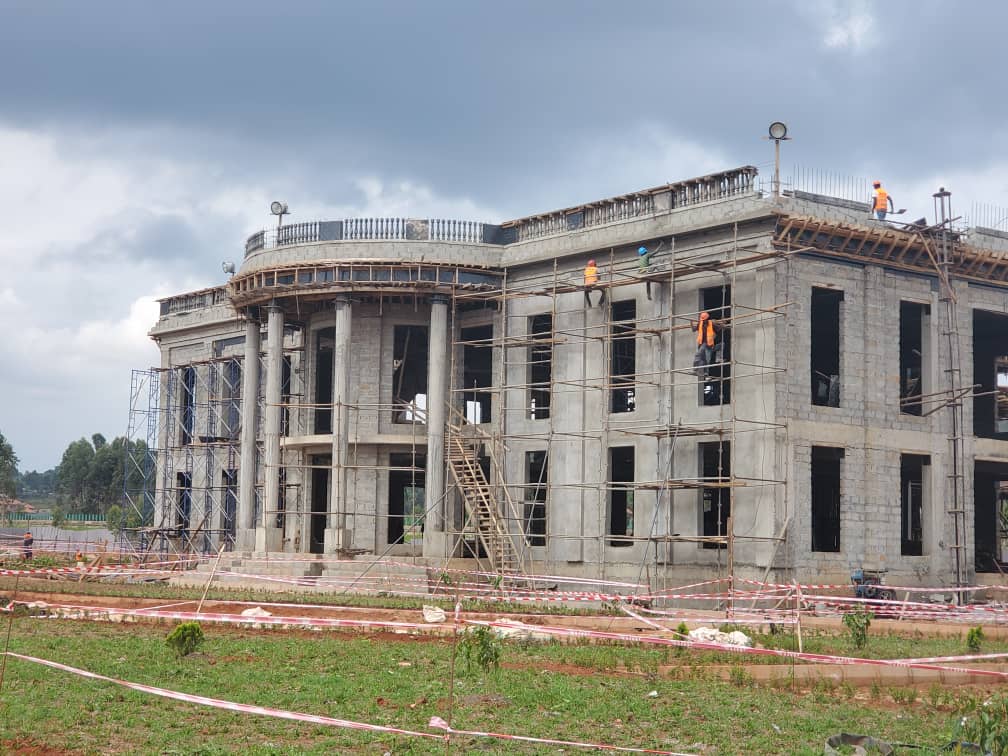 Construction progress is at 70%

Other Projects Under Ham Enterprises

Apart from Halm Palm Villas and the Ham Agro-Processing projects, the tycoon is also the proprietor of several other businesses, among other commercial plazas Like Ham Towers and Ham Shopping Mall at Makerere, owned under the Ham Group of companies. His building house financial institutions, shopping stores, institutions, health and fitness centers, accommodation suites, entertainment and relaxing centers to mention but a few.

He is also the proprietor of Ham Shopping Grounds at Nakivubo, which was initially part of Owino Market but nowadays houses thousands of very organized traders in the shops that not only simplify shopping for the public, but generates much revenues for both the central and local government through tax and trade license payment. 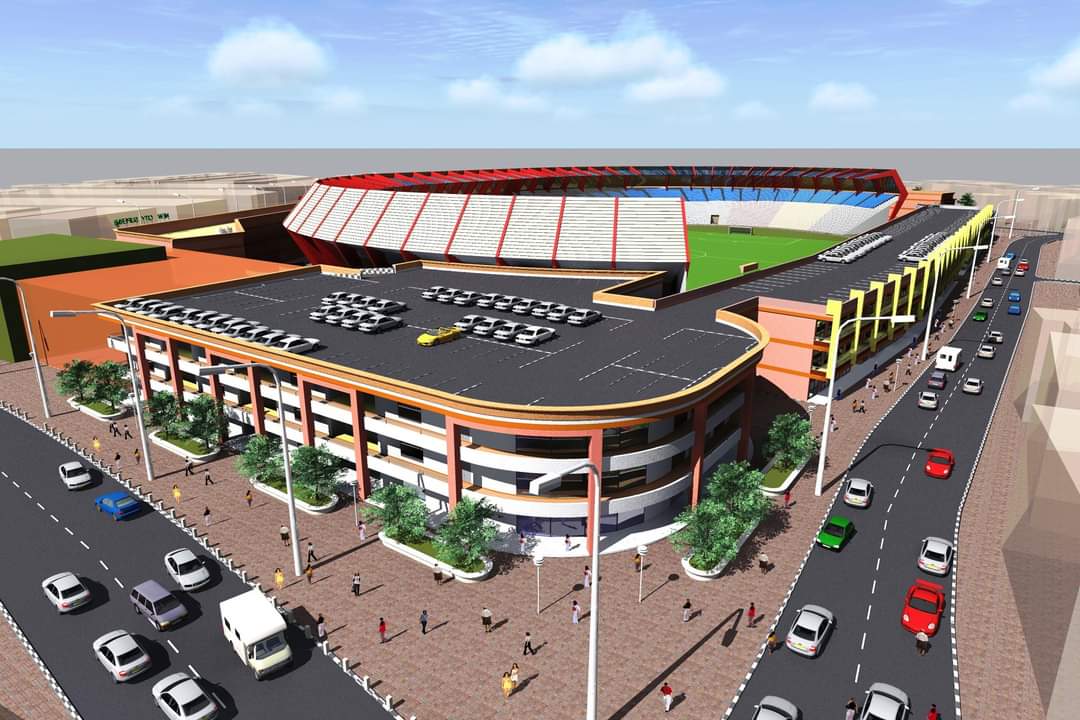 It should be noted that in his book Success and Failure Based on Reason and Reality, Ham states that: “When we travel abroad, as we go through the airport terminals, we are never judged by who we are or how much money we have on our bank accounts but judged by the passports we hold and our country of origin. Being successful in a poor society is partial success, that’s why I am currently investing in agro processing and value addition to not only grow my empire but also make a difference in my society.”
It is for that reason that he decided to diversify to the Ham Agro Processing Industries Ltd, where he contracted Roko Constructions to Set up Agro-Processing, Packaging, storage/warehouses and the administration block and the infrastructure involved in the process.

Ham revealed that this project is mainly aimed at adding value to our agro produce which will boost their demand and market domestically, regionally and internationally and hence import Substitution since as a nation we currently import almost everything despite the fact that we are an agro-based country: with this project therefore, more will be produced for our domestic market and the surplus exported, thereby limiting the dependency syndrome and increasing the national income from the exports. 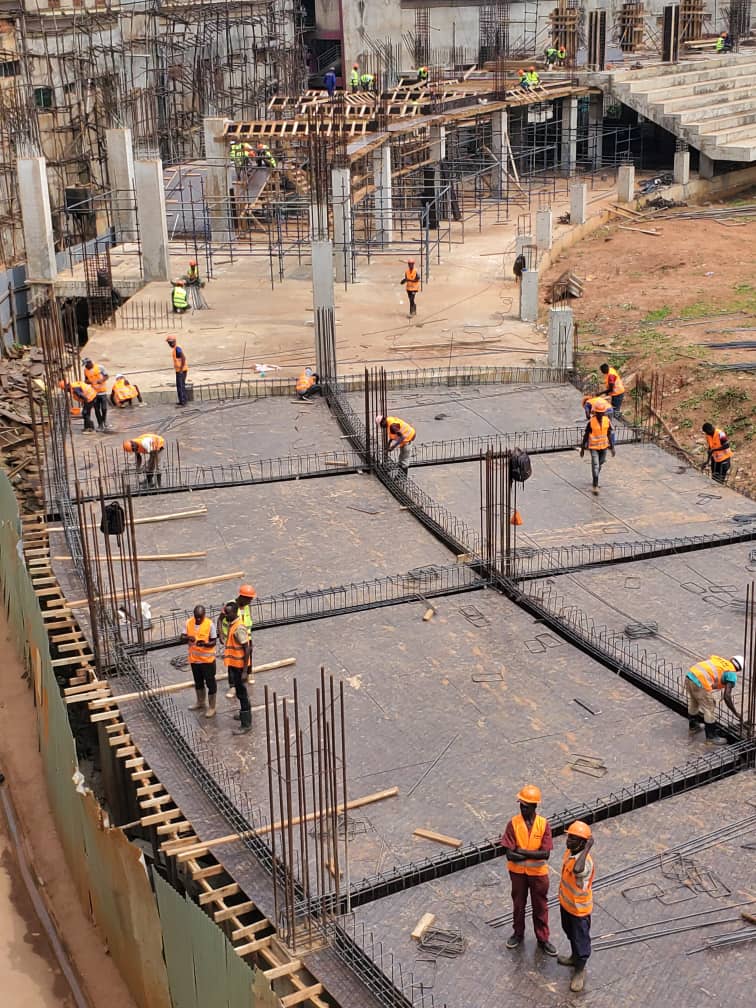 Construction of Nakivubo Stadium is underway

Ham’s economic growth has no doubt established foothold in Uganda in recent years by creating tremendous business opportunities for local and foreign players; the demand for commercial space in the country is rapidly on the rise, an opportunity Ham Enterprises is exploiting by providing the much-needed business space to Ugandans at affordable rates.

Besides that, the Ham Group of companies has played a big part in job creation by generating employments opportunities for thousands of Ugandans.