Ivan Kituka, the Senior Manager Branch Performance and Customer Experience at Housing Finance Bank, (HFB) is living in danger after a very jilted and cuckolded husband who only identifies himself as Sozi, has threated to shoot him in the head and chest for bonking his wife.

In a letter written by the said Sozi, titled ‘RE: I COMMIT TO SHOOT YOU IN THE HEAD FOR PERISTENTLY F***ING MY WIFE’, addressed to Ivan Kituka, copied to the Chief Executive Officer HFB, Commercial Banking Supervisor HFB, and other senior managers of the Bank, Sozzi accuses Kituka of bonking his wife day and night, reason why he is committed to shoot him in the head and chest.
“For a long time you have f*c** my wife at your will and wish from the time you were her supervisor in Ntinda. You have continued to f*c* her over the years and you have broken my family to the lowest level.
In your work station you have mounted my wife you pig. I have tried to warn you, physically, like I did slap in front of your customers and subordinates in your Kololo Branch, I thought that embarrassment would make you leave my wife but you haven’t, my wife dresses like a prostitute because of you….” Sozzi alleges in his letter.

According to sources at Housing Finance Bank, Sozi is so annoyed with Kituka because despite the fact that he is the one who married the woman (names withheld on request) he (Kituka has bonked her more times than him, if they are to count.

This is because Kituka allegedly spends a lot of time with Sozi’s wife, whereby, according to letter written by Sozi, Kituka often feigns trips to the USA and UK on which he goes with the wife purportedly for official duty, yet in actual sense they be going for bonking sprees.

Sozzi continues that ; “…All those trips you have been faking with my wife to UK and US ‘Mbu’ on official duty that was merely to defraud the bank to fund your devilish intentions with my wife. I have in my possession videos of you f*c*ing my wife in a lodge I can’t mention here. I can’t imagine like you pig, you ugly thing, incompetently f*c**ing my wife in the video yet you have a wife. You with your matchstick P***s entering the V***a of my wife. Oh Noo!!
These days you even jog around the streets of Kololo with my wife and then you proceed to your usual rooms for you to lick her c**** as she licks your match stick like p***s, oho you pig I have the videos of such evil ways of yours with my wife and let me make this clear to you, I’m going to make these videos clear for print and social media for your wife and children to know.” 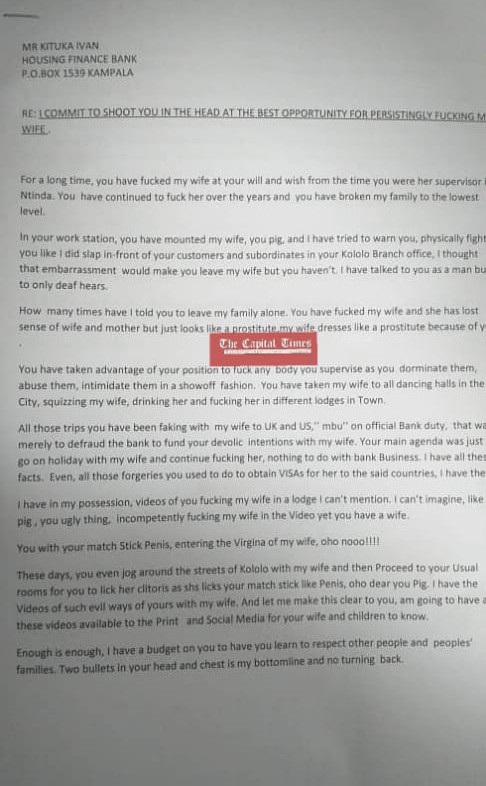 Part of the letter reads

He goes on to threaten Kituka by writing thus; “Enough is enough. I have a budget on you. You have to learn to respect other people and people’s families.
Two bullets in your head and chest is my bottom line.
My boys who are to do the job are on record for outstanding accuracy on Targets. As I said, at the best opportunity, they will hit you….”

However, it is not yet clear whether Kituka has reported a case at police yet, because these are very dangerous threats to his life and by the time of filing this story he had not yet issued a statement about Sozzi’s allegations. 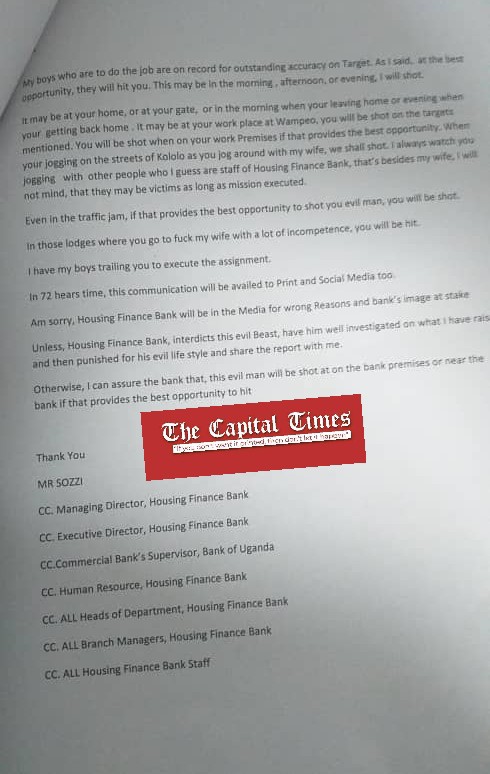 Part of the threatening letter reads

Our efforts to reach him on his office line were also futile, just like attempts to secure a comment from the Housing Finance Bank Communications Desk were