Investigators into the corruption scandal at the Equal Opportunities Commission (EOC) that involves the Chief Executive Officer (CEO) Sylvia Ntambi Muwebwa and many of her staff members have exposed the glaring double standards at the Commission, which are set to rid it of all the integrity and transparency that has always been accorded to the government entity.

This comes after investigators discovering that although Ntambi is being currently handled with gloved hands and has not yet tasted the wrath of the law because of her alleged misdeeds at the EOC, there are some people at the same Commission that have been treated to the High Handedness of the Ministry of Gender, Labour and Social Development, under which the Commission falls.

The investigators names one of the victims of double standards at EOC as Dennis Nduhura, a former Member and former Vice Chairperson of the Commission.

The investigators have established that Nduhura was fired from his position from orders of former minister Janat Mukwaya, on grounds that he could not serve on both the National Water and Sewerage Corporation (NWSC) Board of Directors and that of the EOC.

What baffles investigators is that Nduhura’s adversaries fronted conflict of interest and other flimsy reasons to ensure that they veto his leadership at EOC, yet Ntambi, whose name has been cited in corruption scandals and is being faulted in dodging court walks Scot-free and still heads the EOC, despite the glaring evidence lodged against her by Lt. Col. Edith Nakalema’s State House Anti-corruption Unit.

Here below is the letter that former Minister of Labour, Gender and Social Development Hajjat Janat Mukwaya wrote to EOC firing Nduhura;

“RE: TERMINATION FROM OFFICE AS A MEMBER / VICE CHAIRPERSON OF THE EQUAL OPPORTUNITIES COMMISSION (EOC)

You will recall that your appointment is subject to the Constitution of the Republic of Uganda, the laws and regulations there under.

You also recall that having written advising you to resign either from EOC or NWSC, on 1st March 2018, I again invited you for a fact finding arbitration meeting attended by the Chairperson of EOC whereof, you were given a hearing regarding your membership on the EOC as a quasi judicial body with powers of Court and that of National Water & Sewerage Corporation, both public entities.

Specifically, in the said meeting, we agreed and resolved that you would resign from either of the bodies for the following reasons:

i. Maintaining your integrity and that of the Commission as a Court:

ii. Maintaining independence of the Commission in dispensing justice, in the event that a matter involving NWSC is before the commission where your presence forms the only needed quorum;

iii. Availing equal opportunity to other Ugandans to serve their country in any of the above capacity.

iv. Avoiding conflict of interest since NSWC is one of the EOC clients.

Considering the fact that under S. 15 of the EOC Act, the Commission is an independent Court, with powers to enforce its mandate, I find it unethical for you to continue occupying the two offices in public entities.

After wide consultations, including seeking the guidance and opinion of the Attorney General, I hereby invoke my obligation as per the Cabinet Policy Directive under Cabinet Minute No. 11-4(2016) and 16 (2016) which clearly states that no person should serve on two public boards, at any one time.

This is therefore to terminate your membership from the office as a member and Vice Chairperson of the Commission.

This is also to direct that you handover to the Chairperson and the Secretary EOC all government property in your possession with immediate effect.”

A whistleblower complaint filed before the President’s Office lifted the lid on the current troubles at the Equal Opportunities Commission, which resulted into Ntambi and others facing charges of corruption. 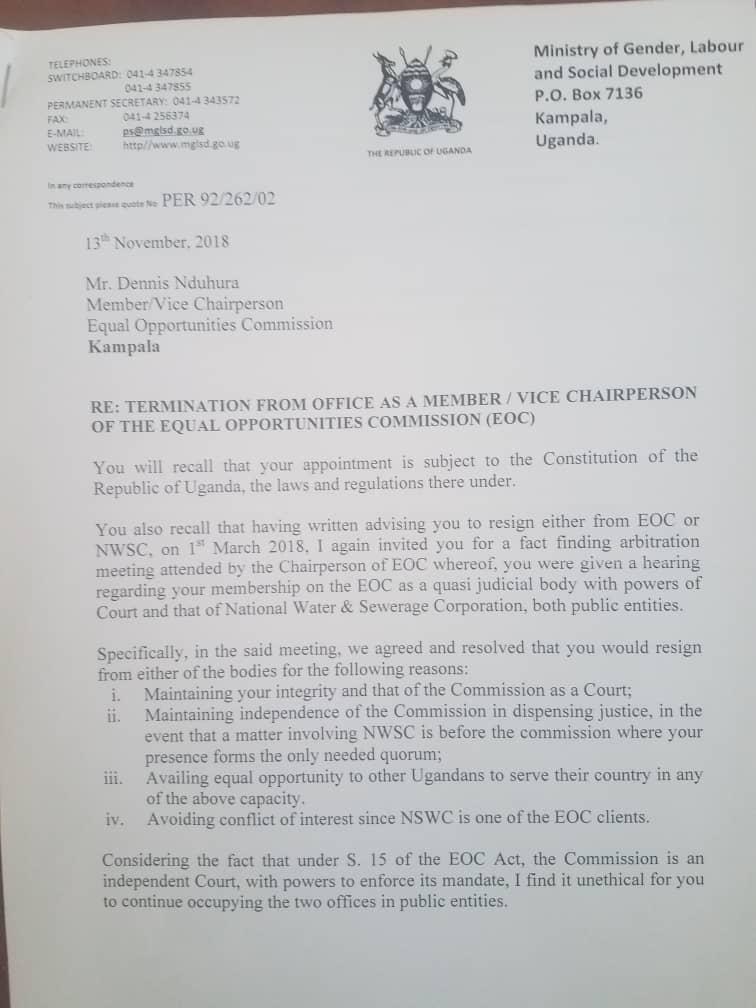 Ntambi joins the institution’s accounting officer, and eight other senior staff earlier charged with the same offences. Ntambi was last month added to the charge sheet as A10 before the Anti-Corruption Court in the case where nine other officials of the commission have been undergoing trial, charged with defrauding the government of millions of shillings.

She is jointly charged with Mr Mujuni Mpitsi, the Secretary to the Commission; Olwor Sunday Nicholas, the Undersecretary; Moses Mugabe, a Senior Monitoring and Evaluation Officer and Byangire Harriet, a Senior Accountant. Others are: Edith Kamahoro, a Senior Personal Secretary; Kwesiga Ronnie, an Accounts Assistant; Jjemba Evans, the Principle Compliance Officer; Kwihangana Manasseh, a Senior Compliance Officer and Sarah Nassanga an Office Attendant.

She was charged in absentia in the Anti-Corruption Court on Tuesday, September 22, 2020. She was represented by her lawyers who pledged to present her before court on September 30 to take plea. The charges are as a result of a May 22, 2019 complaint to President Yoweri Museveni about several staff issues at the Commission, with the whistleblower lifting the lid on corrupt practices at the Commission, that were later investigated by the State House Anti-Corruption Commission. 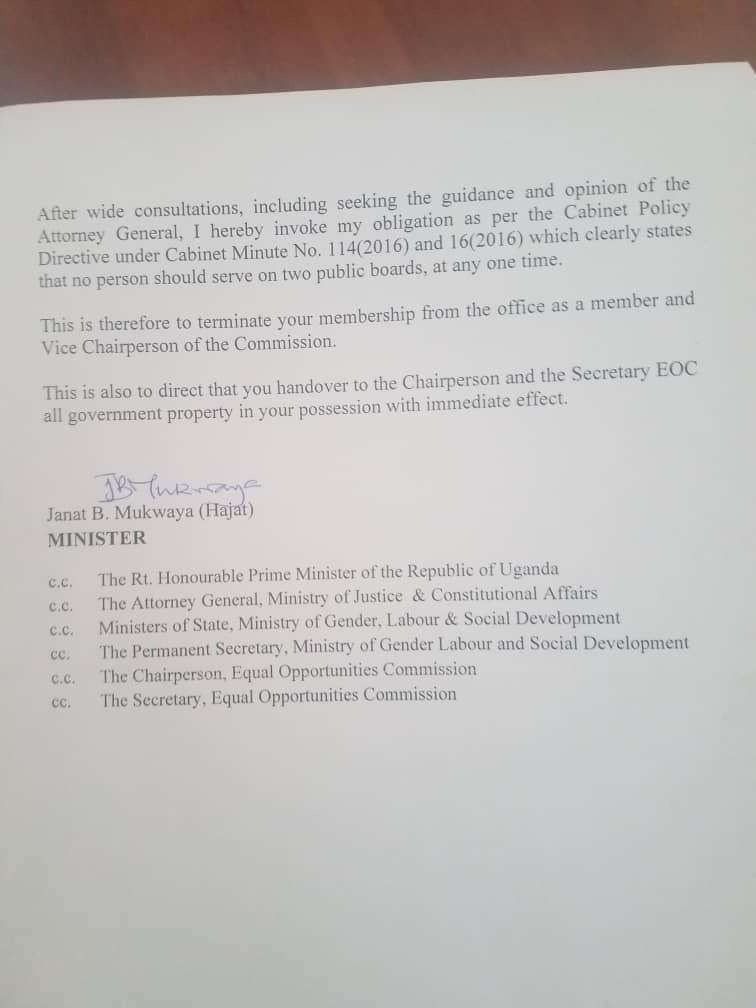 Part of the letter terminating Nduhura’s contract reads in part

Ntambi was supposed to appear before court on Wednesday, 07 October 2020 following earlier criminal summons issued last year, but she did not and the matter was adjourned to October 8, 2020 and still she absconded, which prompted court to adjourn the matter to October, 29, 2020, when she is expected to either appear without fail or get arrested.