A group of Rukungiri concerned Anti corruption community has petitioned the Speaker of Parliament Hon Rebecca Kadaga to investigate their area Resident District Commissioner ‘RDC’ Daniel Kaguta and Kick him out office after being convicted by Anti corruption court due to endless scams.

They claim that RDC Kaguta was previously convicted on criminal activities after being prosecuted by IGG which shows that he is so unfit to hold any public office and represent fountain of Honour President Yoweri Kaguta Museveni in any capacity.

The petitioners argue that Mr Kaguta should not be holding any public office now because he hasn’t served 10 years sentence.

The Petition To Speaker Kadaga reads..

“We the concerned anti corruption Rukungiri community wish to petition you with regards to the above President’s representative in our district Mr Daniel Kaguta whom we consider unfit to represent our beloved president known to be at the fore front of fighting corruption.

We are aware that the President is fountain of honour and correspondingly his representatives in districts should be  persons of intergrity or of unblemished character.

However,our own Mr Kaguta having been charged by IGG under anti-corruption act,prosecuted by office of IGG before anti corruption court, convicted and sentenced by judge Margret Tibulya of the high court and court having ordered each accused persons not to hold office for a period of 10 years from date of convictions.

Madam speaker,we expected office of IGG after conviction and sentence of Mr Daniel Kaguta to communicate to the appointing authority to relieve him his duty for the above reasons.

Daniel Kaguta has not since learnt his conviction,that corruption is a cancer eating our society that requires to be fought by all people of good will but instead he is the biggest promoter of corruption in our district forexample he was involved  in theft of Covid-19 donations ‘posho’, illegally involved in selling, transporting,extracting timber from Imaramagambo forest and to state the least bribery is his everyday’s activity.

We further suspect that murders, robberies committed using guns in the district could be linked to him.
We have resorted to petitioning your office because any attempt to investigate all above misdeeds of our RDC is and has always been frustrated by his office or his ‘God fathers’.

The purpose of this petition is to kindly to request you cause an investigation and or liase with relevant Government institutions and for reasons above mentioned to dismiss and or retire in public interest Mr Daniel Kaguta. 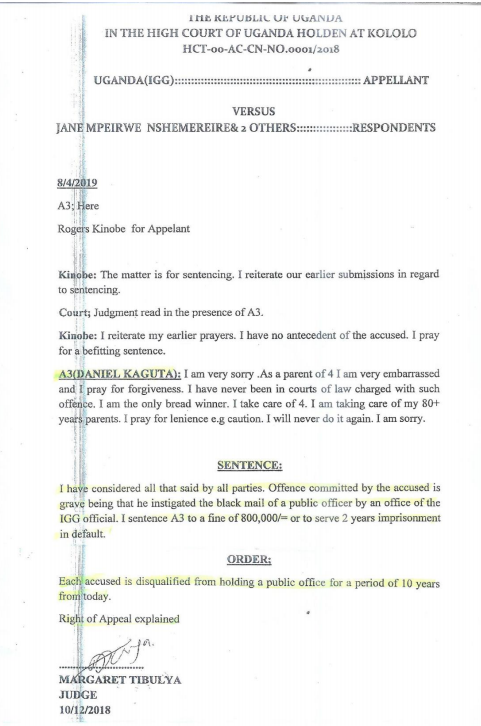