Babikola who is also the NUP Sembabule district coordinator communicated her withdraw from the race in a letter to the party secretary-general, David Lewis Rubongoya. The letter is copied to the Electoral Commission chairperson.

In her October 30th notice, Babikola argues that she is incapable of continuing with the race due to lack of financial resources to canvass for votes across the district.

She asked the NUP leadership to formally write to Electoral Commission to strike her name from the list of candidates vying for Sembabule Woman parliamentary seat.

Here is her letter..

Dear Lewis David,
RE: WITHDRAWAL FROM THE WOMAN MEMBER OF PARLIAMENT – SEMBABULE DISTRICT ELECTIONS.
Reference is mode to the subject matter and thus address you as hereunder.
I was duly nominated by the Electoral Commission to contest for the position of the Woman Member of Parliament For Sembabule District under the National Unity Platform.

However due to motives well known to me, this notice is hereby mode to unequivocally to with draw my candidature from the race ond I don’t wish to contest in the aforementioned position and my name should be struck off the list of the nominated candidates to contest for the position of Sernbabule district woman member of parliament.

This notice is mode is mode pursuant to Section 19 (1) and (2) of the Parliamentary elections Act 2005 as amended and all other enabling laws.

The purpose of this letter is to inform you of my withdrawal from the race of Sembabule District Woman Member of Parliament and request you to write to the returning officer as stipulated under the law.
Yours Faithfully,
BABIKOLA ZAITUNI

Ibrahim Mpuuga, the Sembabule district NUP publicity secretary has confirmed receiving the notice from their candidate. He says they have unsuccessfully tried to reach her. 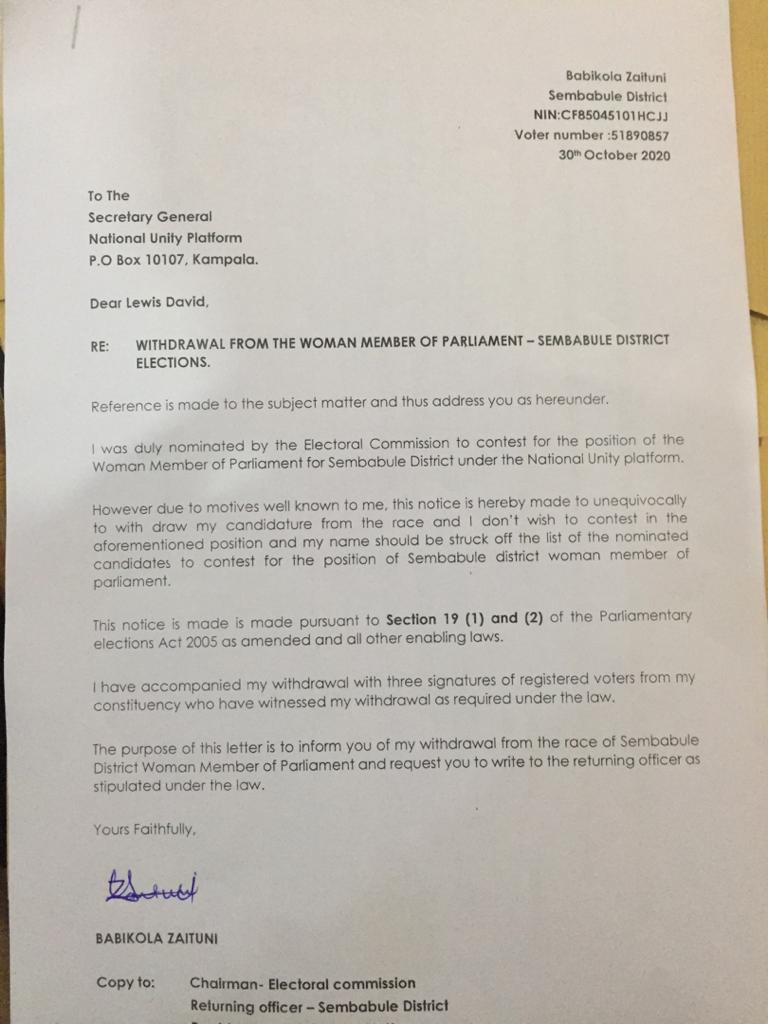 Mpuuga said they are suspicious of Babikola’s conduct because of her failure to participate in the party’s mobilization activities despite being the NUP coordinator for Sembabule district.

He said they will critically analyze the circumstances under which the candidate decided to withdraw her candidature.

Barbra Mulimira, the Sembabule Electoral Commission returning officer said they are yet to receive an official communication from the candidate or the political party which endorsed her nomination.

Efforts to speak to Babikola have been futile as she neither picked nor returned calls from our reporter.