On Monday, Dr. Flavian Zeija blocked the payment of Shs120 billion to Mr. Kiggundu pending the hearing of an application filed by Diamond Trust Bank Kenya (DTB). In his ruling the Principal Judge said that the bank would suffer a great loss if the order is executed before the appeal is disposed of.

The money is arising from a Commercial Court ruling which ordered Diamond Trust Bank (DTB) Kenya to refund Shs120 billion debited from Hamis Kigundu’s Bank accounts after declaring that $4,014,444 and $6,974,600 loans extended to him were illegal.

“We request for your intervention in regards to the judicial misconduct of the principal judge Justice Dr. Flavian Zeija in handling our file. We run to court expecting to receive justice, however to our dismay we have been turned into victims in this temple of justice through the unfair biased actions of the principal judge,” Ham said. 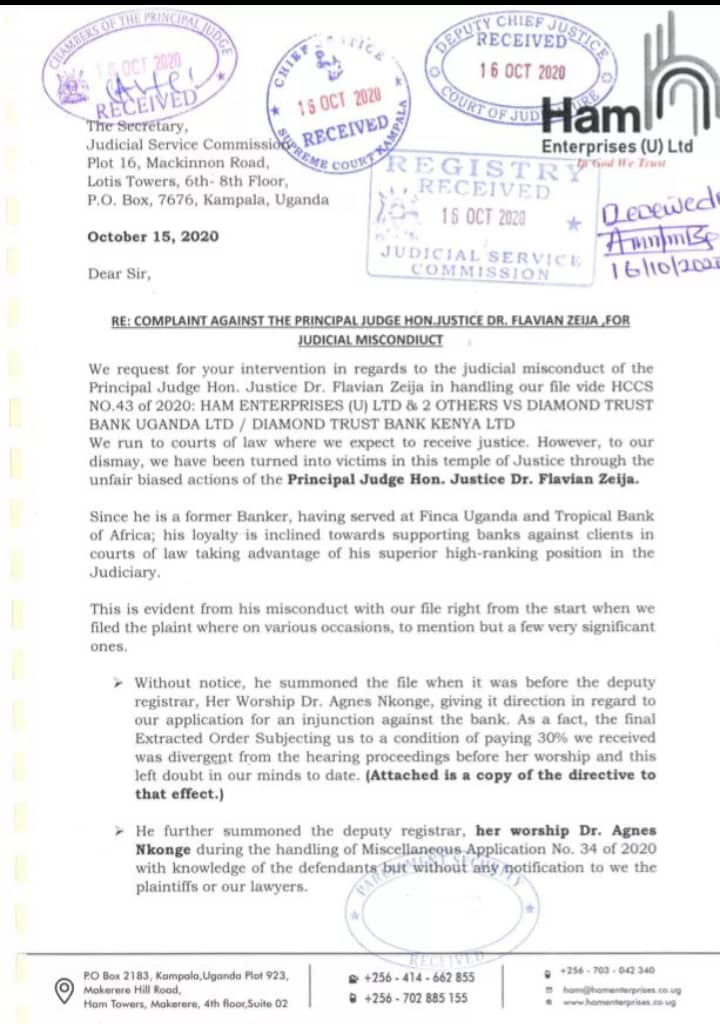 Kiggundu avers that since the principal judge worked with FINCA Uganda and Tropical Bank of Africa, his royalty is inclined toward supporting Banks against clients in Courts of Law taking advantage of his ranking position in the judiciary.

He accused Dr. Zeija of summoning their file when it was before deputy registrar Dr. Agnes Nkonge and giving it directions in regard to their application for an injunction against DTB and further summoned her during the handling of miscellaneous application with the knowledge of defendants but without any notification to plaintiffs.

“The actions of Dr. Zeija not only have compromised the independence of the judiciary but have equally seen him betray his oath to uphold justice, promote democratic principles, uphold the rule of law and safeguard the constitution through protection of human rights for all citizens of Uganda,” Ham said.

“We therefore request for your urgent intervention to this regard and in the interim, the principal judge should rescue himself from any legal proceedings in regard to our file, let justice prevail in line with the procedural guidelines of Courts,” he requested.

In March, Ham dragged both banks to court for siphoning over sh120b from his accounts without his consent. He also wanted the court declare that the banks demand for $4,014,444 and $6,974,600, which was advanced to him by DTB-Kenya, is illegal and unenforceable on the grounds that the Kenyan bank had no license to carry out financial business in Uganda.