The Director of Public Prosecutions Justice Jane Frances Abodo has directed the Permanent Secretary of the Ministry of Gender, Labour and Social Development A.D Kibenge to interdict Equal Opportunities Commission Chairperson Sylvia Muwebwa Ntambi as she battles corruption and abuse of office charges in the Anti Corruption Court.

This website has learnt that on November 9, Kibenge wrote to the Solicitor General, seeking legal advice before he proceeds with the DPP’s direction.

“I am in receipt of the case file: “Uganda Vs Agnes Enid Kamahoro and 9 Others- CID Headquarters E/297/2019” from the Director of Public Prosecutions, bringing to my attention the fact that Ms. Sylvia Muwebwa Ntambi, the Chairperson of the Equal Opportunities Commission has been charged at the Anti-Corruption Court with offences of Conspiracy to Defraud (2 counts) and Corruption, contract to Section 309 of the Penal Code Act and section 2 (t) of the Anti-Corruption Act 2009,” writes the Mr. Kibenge.

“As you are aware, the Chairperson and Members of the Equal Opportunities Commission are appointed by H.E the President with the approval of Parliament.… In reference to Regulation 38(1)b of the Public Service Commission Regulations S1 No.1 of 2009, and order F-S 8 of the Public Standing Orders, the Director of Public Prosecutions has advised me to perform my statutory obligations as the responsible officer to interdict Ms. Sylvia Muwebwa Ntambi, having been charged with criminal offences, in order to pave way for smooth investigations and uninterrupted prosecution of the case,” Kibenge’s letter reads in part.

Ntambi was remanded to Kigo Prison on October 29, after skipping Court on several occasions until criminal summons were issued. She was granted bail on November 4 and her travel documents were deposited with court to avoid leaving the country. 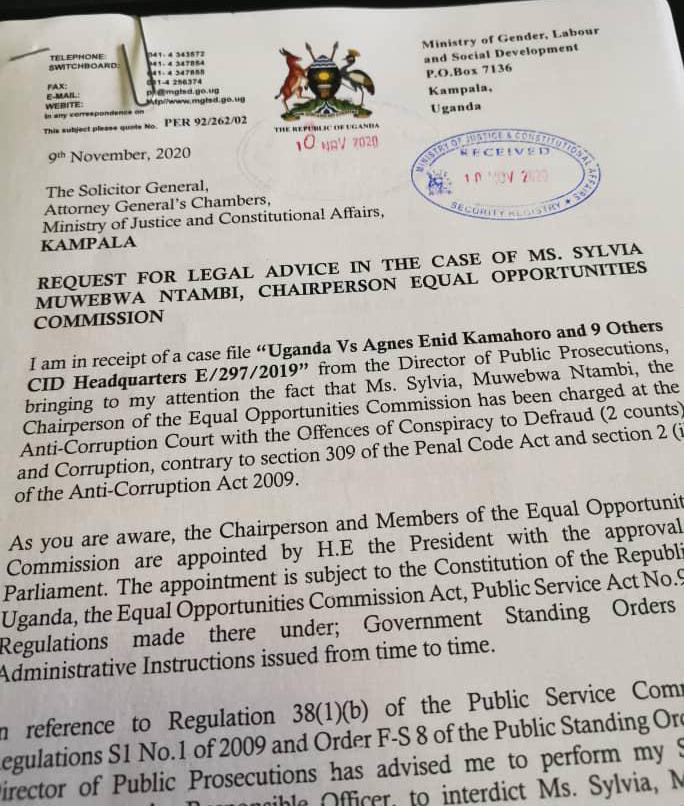 Part of the letter reads..

According to the letter, Kibenge adds seeking advice from the Solicitor General on whether the DPP’s advice stands and who is the right officer to interdict Ntambi “as she is a Presidential appointee.”

“… If the above advice by the DPP stands, to seek your advice on who is the rightful officer to interdict Ms Sylivia Muwebwa Ntambi since she is an appointee of H.E the President,” Mr. Kibenge wrote.

It is not clear whether the Solicitor General has responded but either way, the disgraced Chairperson is slated to leave office at the End of December 30th when her 4-year term ends. 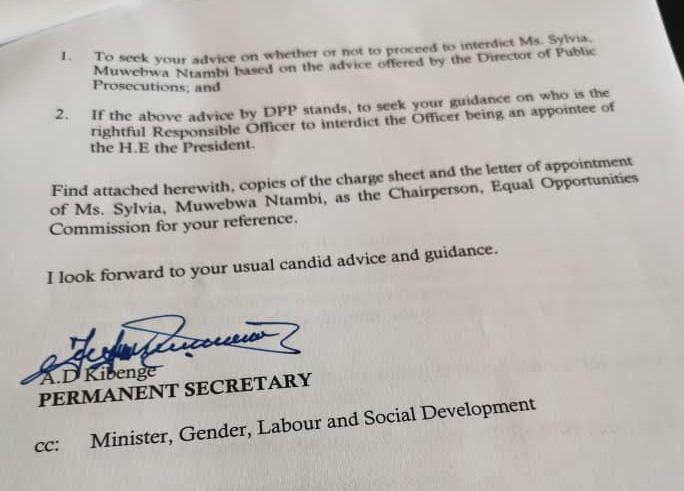 Part of the letter reads..

However, the DPP is concerned that if she is not interdicted, she can interfere with evidence and intimidate witnesses who are her subordinates.

Ms Ntambi is jointly charged with her assistants at the Equal Opportunities Commission on abuse of office, corruption and conspiracy to defraud government more than 35 million shillings.

Prosecution alleges that Ntambi conspired with her assistants to steal money which they accessed by the virtue of the different offices they hold. The money was obtained between January and December 2018, as per diem for editing and drafting Equal Opportunities Commission HIV/AIDS workplace policy, yet none of the officials was reportedly entitled to it.

The prosecution alleges that the per diem was acquired by Kamahoro, the senior personal secretary Equal Opportunities Commission and later approved irregularly by Mujuni, the Secretary to the Commission, an act which caused financial loss to the government.

It is also alleged that part of the stolen funds had been earmarked for sensitization on equity and rights issues in lower local governments in Karamoja region.

The group has since denied the charges, released on bail and interdicted to pave way for investigations.