President Yoweri Museveni who is also the NRM Presidential Candidate has warned those who have been attacking people in some urban centres and in Kampala that they will soon lose appetite for violence.

“We are campaigning indirectly were we don’t hold rallies for the sake of not infecting more people. We have already lost 2 members of parliament, scientists etc. It is criminal for anybody to ignore this. We are not going to tolerate this. Everybody must respect the rules of the Ministry of Health. Our people should be kept safe. Those who have been attacking people in Kampala will soon lose appetite for violence. You have entered an area that we know very well. Whoever did that will regret,” he said.

Referring to pockets of violence that erupted yesterday, President Museveni said whoever is responsible for the violence in Kampala and other urban areas will be held accountable for the crimes committed.

The President was today addressing leaders from the 4 districts of Northern Karamoja that include; Abim, Kotido, Karenga and Kaabong. The meeting was attended by NRM Flag bearers at Parliament, LCV, the incumbents, incase the lost in the primaries, NRM executives at the District and Municipal level, NRM league chairpersons at District and Municipal level, Youth, Women, the Elderly and PWD council chairpersons at district level and NRM sub-county Chairpersons. 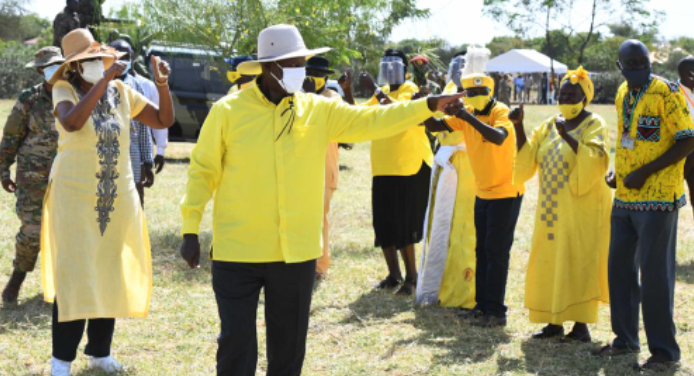 The President said some of those groups making trouble in urban areas are supported by outsiders including homosexual groups that don’t like stability and independence of Uganda.
“They should not divert us. The virus is here and now there is hope of a vaccine. We are also working hard towards finding a cure.

They want to create violence so that elections are not held. Elections will be held and they will lose badly,” he said.
About the campaign
The NRM candidate later exhaustively told delegates at the meeting the numerous achievements that made NRM stick out of other governments that so often collapsed in the country.
He said NRM, before coming to power, had analyzed the running of the country by governments of the past and noted that they were immersed in the position of identity rather than focusing on the needs and interest of the people.

He informed them that NRM prioritized the interest of the people that led to the forming of a strong army followed by the establishment of peace that attracted investors who are today contributing tremendously to the economy of Uganda.

He said the contribution by investors has enabled the government to sort out many challenges that include the construction of infrastructure among many others.
He however assured the people of Karamoja that the road from Moroto, Kotido, Kaabong to Kidepo will be tarmacked. The road from Soroti to Amuria-Obalanga-Acanipii to Abim.

He said even groups like those of women and the youth in Abim, Kaabong Kotido, and Karenga districts are being supported with funds set up for them and will receive more resources if required. 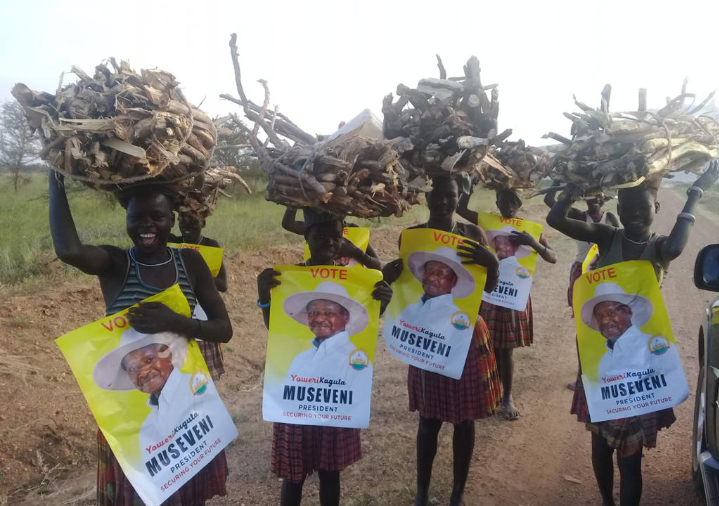 Candidate Museveni assured Ugandans that the future of this country is very bright. He said the government would not tolerate confused people who are playing with fire.
“Do they know what sacrifice was made to achieve the good infrastructure like roads,” he asked.

President Museveni also assured the people of Karamoja that other issues like electricity is being worked on and Kotido is already connected to the national grid.

The First Lady and Minister of Education and Sports Mrs. Janet Kataha Museveni who was very delighted to be in the sub-region once again reminded the gathering, of the principles of NRM that include peace, unity and transformation.
She said NRM has stood by those principles even during the current campaigns where meetings are held in a very orderly manner.

“Our meetings are orderly and peaceful showing the principles we stand for of peace, unity and development. We must inculcate this to our children in Uganda,” she said.

Addressing herself to the people of the region Mrs. Museveni said NRM would not like to hear about cattle rustling in Karamoja but encourages the children of the region to do modern cattle keeping and grow the industry.