Brigadier General Emmy Mulindwa who has been the Acting Deputy Chief of Personnel and Administration of the Uganda Peoples Defence Forces has today been laid to rest at his ancestral home in Masulita, Wakiso District .

Brig Mulindwa passed away on the 18 November 2020 in Mulago Hospital where he had been admitted after contracting the deadly COVID-19.

While addressing the mourners at the scientific burial attended by selected UPDF officers, close family members and friends, Major General Sam Kiwanuka who represented the Chief of Defence Forces praised the Late Brig. Gen. Mulindwa for his dedicated and committed service during his time in the UPDF and described him as an instrumental officer in the restoration of peace in the country.

Maj. Gen. Kiwanuka described the late, who he met in Monduli Tanzania where he was doing his Cadet course, as a very supportive officer during the time they served in South Sudan and Somalia.

Speaking on behalf of the widows, Mrs. Nakibuka Robinah Mulindwa said the late was a loving and respectful husband and friend. They thanked the UPDF fraternity for the support they have rendered towards the family during his life and in death.

Speaking on behalf of the Children, Captain Julius Yigga a son to the fallen Brigadier thanked the UPDF medical staff for all their efforts towards preserving the life of the late during the time he was admitted in hospital.

He said their late father was a person who loved people, welcomed everyone in his home and never discriminated anyone regardless of their age and background.

Brig Gen Emmy Mulindwa joined the army in 1983 during the NRA bush struggle and during his career, he served the UPDF in various capacities as an instructor, administrative officer, operations officer during Operation Iron Fist, Battle Group Commander Group XII (AMISOM) and Acting Deputy Chief of Personnel and Administration, a position he held to the time of his death.

He was accorded full military respects befitting the Rank of a Brigadier General with an 11 gun salute. 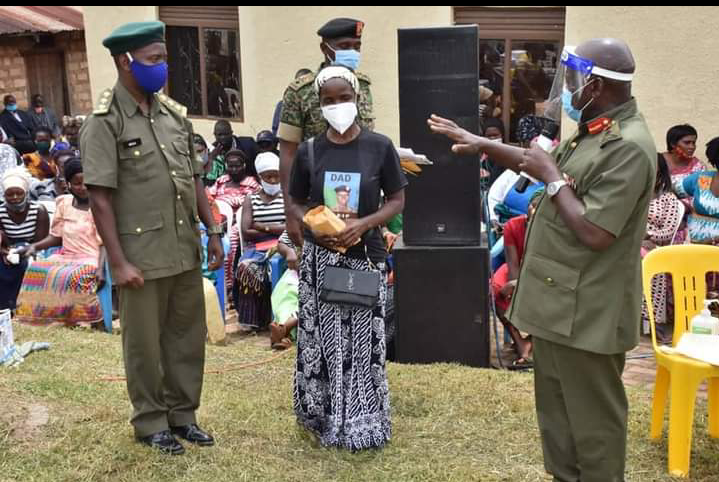 One of his relatives after receiving condolences from UPDF