Sheema Municipality member of parliament who is also the Minister for Science, Technology and innovation, Hon. Elioda Tumwesigye has warned opponents to find a healthy way of looking for votes than blackmail.

He told them that even if they want change, they should not forget where they have come from and start talking shit about him but they should focus on what they are going to do for them.

He warned that however much they are yearning for change, he doesn’t have any right to stop anyone from campaigning, but tarnishing his name calling him ‘ Beyendeza’ won’t give them supporters.

He acknowledged that he have not finished all that he wanted to do for the people of Sheema as promised, but there is no need of de-campaining him.
“You say I have done nothing, but when I start talking about what you call nothing, we can sleep here, so you who have  bigger CVS than mine, why can you remove my name and use your own, and tell people what you are going to do for them, you are on Eliodaaaaa”,he said 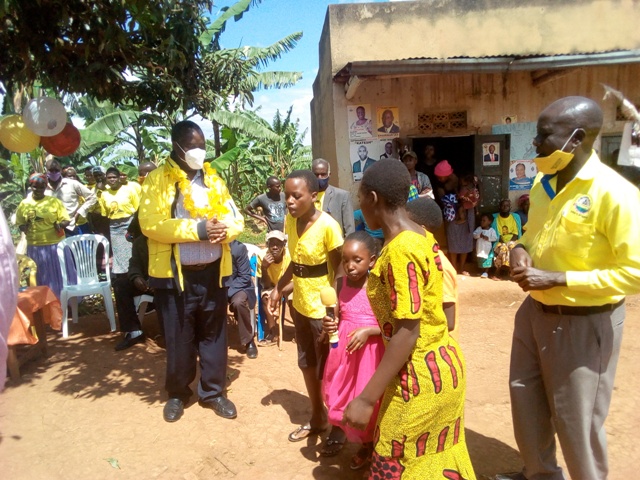 Min. Elioda with his voters in a door to door campaign

When voters asked about health, education and household income, Mr. Elioda said that he is the one that put their own Kabwohe health center 4 on the standard it’s on, reminded them to utilize the regular saving system that he brought (akabox), he said he will improve on agriculture sector by giving every family a sheep of good brand, also in education.
Some people after listening to the news of hope have since vowed to support him and also joined in hunting votes. They said that in last elections, they were taken by greed for money the candidates were giving them in form of buying them.
He ended by praying for everyone who will support him and president Yoweri Kaguta Museveni
Post Views: 1,120