A man who purports to be an operative of Kampala Capital City Authority (KCCA) but is going around town extorting money from bar owners has finally been exposed.

Peter Ssetenda, who claims to be working in the KCCA enforcement department, is allegedly accused of conniving with some rogue police officers to conduct illegal operations during which they forcefully break into business premises, harass bar owners, extort and arrest those who decline to give them money.

Ssetenda, who conducts dubious operations purportedly to arrest people drinking from bars yet they have not been reopened by the government due to COVID-19 restrictions, has reportedly often overstepped his mandate by even extending his operations to restaurants and lounges.

Our reporters interviewed some bar operators in Bugolobi such as at Throwns Bugolobi which was raided over the weekend and a lot of property stolen; who revealed on condition of anonymity that he has a chain of bars where Ssentenda is on payroll and he can never go there because they sort him ahead of his operations.

As if that not enough, our sources further reveal that Ssetenda has together with his rogue cops tormented several businessmen and women within Kampala and its suburbs, whereby afflicted members of the business community have since filed cases of office breaking and theft against them, vide case file number SD REF: 29/14/11/2020 of Bugolobi Police station, where the suspects are KCCA and police officers.

We have since established that Ssetenda and his ‘Kawukumi’ policemen have been terrorizing bar owners in Bugolobi, often breaking into their premises at night, claiming they are looking for people hiding there and drinking only to end up robbing from the same premises. 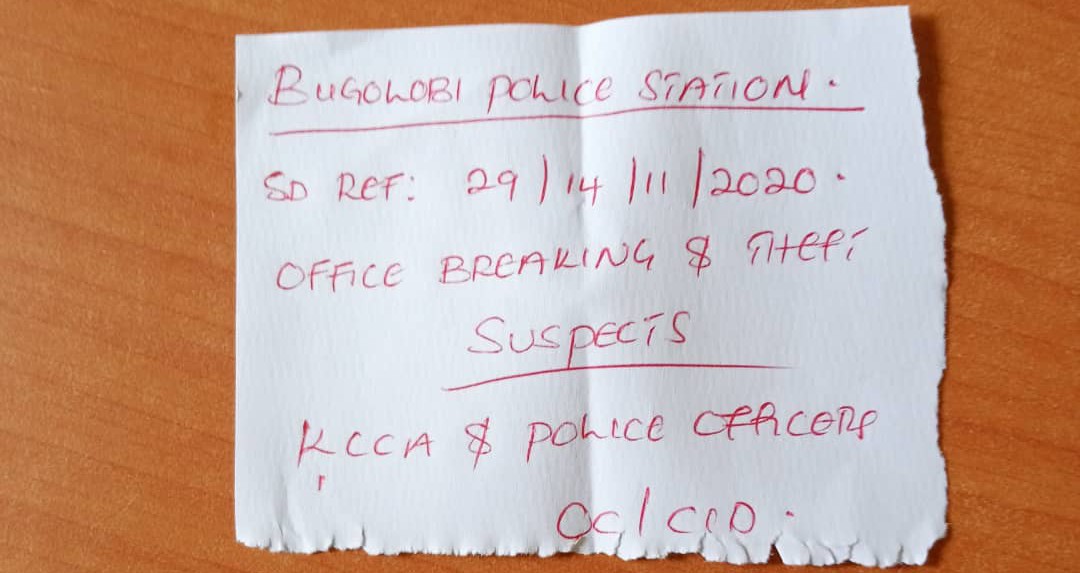 A case in point is The Capital Times Limited Bugolobi, head office located on Level 1 Mango Groove building which Ssentenda allegedly raided together with his goons last week, where they wreaked havoc, stole cash from upstairs offices and items worth millions of shillings, on top of assaulting the managers of the premises.

Worse still, according to the aggrieved businessmen and women, is that Ssetenda is a shameless extortionist who has no official appointment from any KCCA directorate, although he allegedly ‘reports’ to some high ranking officials at the Authority and police, hence he is one of the so-called untouchables at City Hall.

Many of the bar owners are wondering that if Ssetenda’s operations are within the law, how come the people he arrests are never paraded in court.

Many of them, according to the complainants in the matter, often end up bribing the way out of police cells, which is disguised as a fine but none of them has ever been paraded in court, something that has since raised eyebrows about Ssentenda’s dubious operations.

Many of the bar owners who have fallen victim to Ssentenda’s dubious operations say that uses field police officers who raid business premises without notifying Ministry of Health officials, the area police, local security personnel or chairperson, such that he can extort and release the victims without other concerned authorities knowing.

The complainants contend that Ssentenda has been conducting these illegal operations for several months and when he heard that police have him on their wanted list he has since started going around saying that some policemen are conniving with bar owners to tarnish his name.

However, detectives we spoke to revealed to this website that those are Ssetenda’s monkey-tricks to derail investigations. After all, he knows that sooner or later, the law will catch up with him because his days of using KCCA to extort money from people are numbered and have neared their end.

Do you have a story in your community or an opinion to share with us: Email us at thecapitaltimeseditorial@gmail.com or call +256757223865