“We find the attack on Judge Jane Obodo obscene, highly discriminatory and unacceptable given the position of honor Judicial Officers hold. By extension, Mr. Ssemakadde’s gender discriminative online communication was clearly a crude attempt to attack her human dignity and to remove the honor female Judicial Officers enjoy as judicial officers in their own right,” 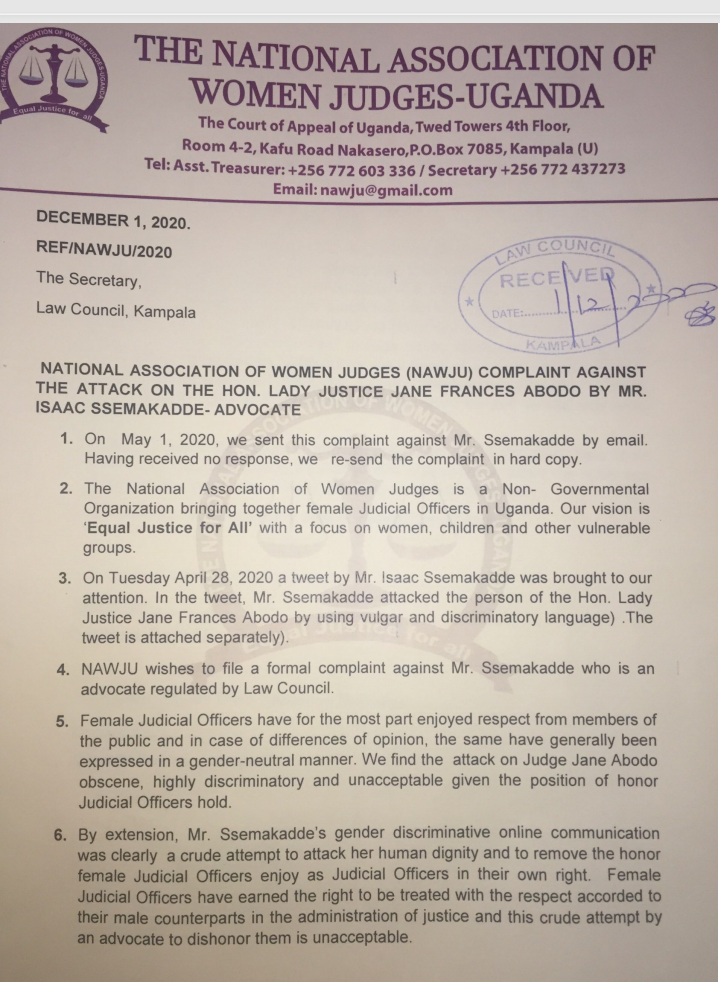 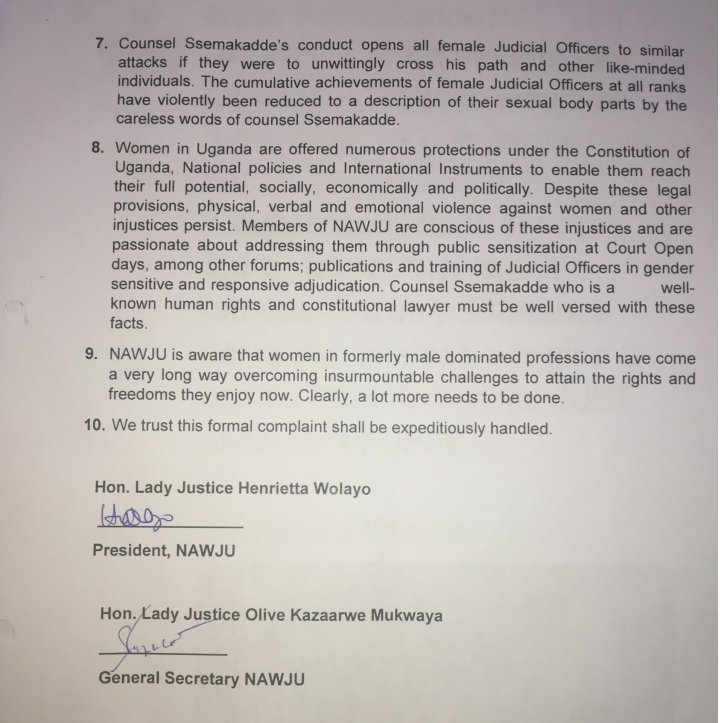 On 10th December 2020, the Law council wrote to Mr. Ssemakadde, asked him to respond to complaints not later than December 31, 2020, failure to which the Council’s Disciplinary Committee would find a prima-facie case against him.

In his response to NAWJU allegations, Ssemakadde has told off the female judges to grow a thick skin and exercise restraint when criticised by their male counterparts.

“Regarding the contents of the tweet at issue, I submit that it constitutes protected opinion and does not reasonably imply what the complainants allege. As a judicial officers’ lobby group, NAWJU should be aware that members of the Judicial or Executive Branch, whether male or female, are not fragile flowers that wilt in the heat of argument or criticism, howsoever trenchant or caustic. Also the newfound power and privilege of women lawyers in a Constitutional Democracy like ours should not be used to discipline their male counterparts arbitrarily.”he said.

Mr. Ssemakadde added that the complaint against him was “misconceived, frivolous and vexatious” and one that ought to be dismissed at once, citing a number of reasons.

“Without accepting liability for the tweet you attached, you must by now know that Ms. Jane Frances Abodo is not ‘a female judicial officer’ as alleged throughout the complaint. She ceased to be a member of the Judicial Branch when she accepted appointment in the Executive Branch as DPP,”

He stresses that Disciplinary Committee of the Law Council cannot handle the matter as it will be sub judice since it is still before the East African Court of Justice, awaiting determination whether or not Justice Abodo ceased to be a member of the Judicial Branch and thereby joined the Executive Branch when she accepted appointment as DPP.

On April 28, Lawyer Ssemakadde took to social media and attacked Jane Francis Abodo, the new Director of Public Prosecutions (DPP), accusing her of not being any different from other cadre judges when she sanctioned charges against Mityana Municipality MP Francis Zaake despite the latter being in a poor health condition.

Ssemakadde referred to Justice Abodo as another of the rotten tomatoes in government.

He was on May 7th, 2020 arrested by detectives from Criminal Investigations Directorate (CID) in Kibuli, Kampala.

Lawyer Ssemakadde was, however, released with out any charge after Abodo distanced herself from the allegations.