The Principal Judge, Dr. Flavian Zeija, has shuffled 26 High Court judges in the latest Judges’ transfers that he announced today (Tuesday, January 19).
The changes that will be effected on February 22, 2021,will see the head of head of the Criminal Division of the High Court Justice Wilson Kwesiga, concentrate On winding up of his judicial work within the Division, as he prepares for his retirement later this year.
Justice Michael Elubu, the current head of Civil Division, takes over the reins of the Criminal Division and will be deputized by Justice Tadeo Assimwe (formerly Mbarara Senior Resident Judge), who will replace Lady Justice. Flavia Senoga Anglin who also retires from service next month.
The other changes will see the redeployment of Justice Dr. Andrew Bashaija who has been away On sick leave, to the high Court’s international Crimes Division as deputy head, where he will deputise Lady Justice Jane F Kigundu , who is on transfer Mbarara as a resident Judge.
The other highlights contained in the Principal Judge. transfer Circular No. 01/2021 has Justice Musa Sekaana being elevated as new head of Ne Civil Division of the High Cart, where he will be deputized by Justice Emmanuel Baguma.
Gulu Resident Judge, Stephen Mubiru is being transferred to Kampala to head the Commercial Division of the High court, where ha will replace Justice Dr. Henry Peter Adonyo, who has been transfered to Soroti as Senior Resident Judge.
‘The changes have been made with a view of attaining more 0.0081 delivery or judicial services; said Dr. Zelja. He adds, “The judges transferred are required to compete matters that are in advanced stages before they hand over and relocate to the new stations. They (judges on transfer) should take on files)
The transfers also come with redeployment of Judges: Henrietta Wolayo,Elizabeth Kabanda and Margret Motonyi formerly at the Executions and Bailiffs Division of the High Court that wound up in December 2020. 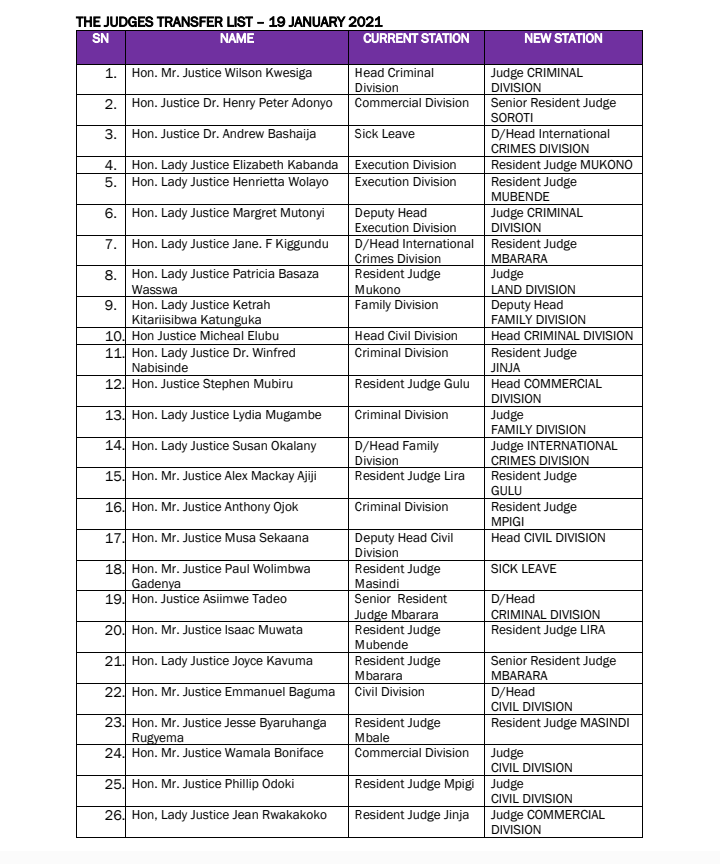 Previous ArticleArchbishop Kaziimba Speaks Out On Ntagali’s Suspension Over Adultery
Next Article ‘Baganda Are Not Sectarian, NRM Should Not Accuse But Address Issues In Buganda’ – Katikkiro Charles Mayiga