The Uganda Foreign Affairs Minister Sam Kutesa has revealed that internet shutdown by the government during the just concluded presidential and parliamentary elections helped to prevent the incitement of violence and use of malicious language.

The minister made remarks while presenting a formal brief to Heads of Diplomatic Missions and International organizations on Wednesday at the Ministry headquarters in Kampala.

Kutesa told the ambassadors that unfortunately, some of the political leaders who lost the elections have continued making inflammatory statements with the aim of inciting violence.

He added that the shutdown of social media denied the masterminds of the violence space to propagate their information. “The temporary shutdown of the internet was a necessary step to stop the vitriolic language and incitement to violence. It is noteworthy that despite efforts by internal and external actors to promote violence, the Government of Uganda has been able to preserve peace,” he said.

Kutesa said that Uganda has continued to enjoy peace without any major incidents of election violence or common criminality. He also defended the massive deployment of the military and police on the streets. “From the beginning of the campaigns some candidates talked about plan, B which was to commit violent acts,” he said.

He noted that to this day, the election losers continue to stoke fear and incite violence, which is a clear and present danger to the stability of Uganda, adding that no country that upholds democracy can tolerate the said Plan B of violent people.  Kutesa also said the government decided to shut down Facebook and Twitter in Uganda in retaliation to the closure of several Government accounts.

“We asked Facebook and Twitter to restore the closed Government of Uganda and NRM accounts but they didn’t heed. In response, we shut them down to ensure equity. Also, some social media platforms like Facebook and Twitter shut down Government of Uganda & NRM accounts leaving accounts of other political actors active – an interference in our elections. We shut them down to ensure equity after not heeding to our call to restore closed accounts,” he said. 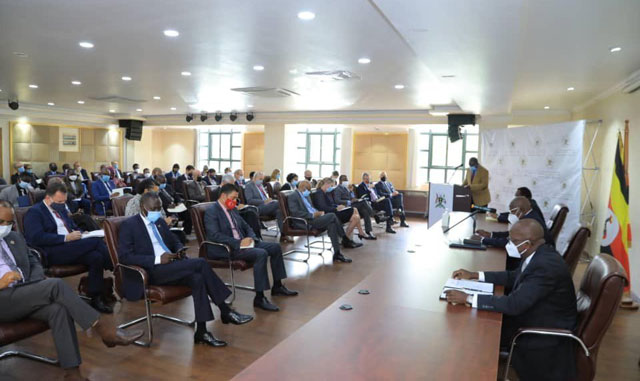 During the internet shutdown, Facebook flagged down a post by Kenya’s President Uhuru Kenyatta congratulating President, Yoweri Kaguta labelling it as false information. This prompted the Kenyan Government to delete the messages for fear of falling victim to Facebook and Twitter massacres.

Although the government has restored internet services, one cannot access social media sites without using the Virtual Private Network (VPN) to bypass the blockade. The social media war started in December 2020 when Uganda Communications Commission (UCC) asked internet giant Google Inc to remove a number of pro-opposition accounts from YouTube, a request Google declined and asked UCC to present adequate information including a court process.

Although in 2016 Government shut down Social media sites during elections, the total shutdown of the internet this time around took Ugandans by surprise. This affected several internet users including businesses like safe body and Jumia and general internet use.

Kutesa said that Government is committed to ensuring domestic tranquillity, security and welfare of its citizens. He regretted the death of Ugandans in the November riots that saw over 50 people killed by security but said the demonstrations were orchestrated by the opposition.

“The insurrection of November 2020 in Kampala and other parts of Uganda was unprecedented but not spontaneous. Some of these leaders aided and abetted the rioters” Kutesa said.