Trending
HomeBusiness“Tax on Withdrawal of Money From Banks? I am Hearing This For the First Time’-Min. Kasaija Denies Own Letter As Netizens Roar

Uganda’s Finance minister, Mr Matia Kasaija, has refuted allegations of a plan by the government to start taxing cash withdrawals from banks.

According to a February 9 letter written by Patrick Ocailip, the deputy secretary to the treasury in the Ministry of Finance directed to the Bank of Uganda Governor, the finance ministry is seeking the Governor’s opinion on the proposal and requests that he also avails data on different categories of withdrawals for further review and determination.

“Following our budget consultative meeting held on February 5, 2021, at this Ministry, attended by officials from Uganda Communications Commission, Uganda Revenue Authority, Telecom Operators and Bank of Uganda, it was proposed that we explore taxation of cash withdrawals from commercial banks. Currently, Mobile Money withdrawals are subject to 0.5% excise duty but on the counter, agency banking and ATM withdrawals in commercial banks are not subjected to the same tax. It is note-worthy that this would encourage cashless transactions promote e-commerce, improve uut complitmee in addition to raising revenue.” reads part of the letter.

The letter continues… “We therefore, wish to seek your opinion on the proposal, and also request you to avail us with data on all categories of withdrawals, for our further review and determination. We require this data for the past thrcc financial years (i.e. starting from FY 2017/18.) Please send this information to Edmund.ariyo@finance.go.ug and Isaacairinaitwe@finance.go.ug
We would appreciate to receive your opinion and the data not later than Friday 12th February, 2021.” 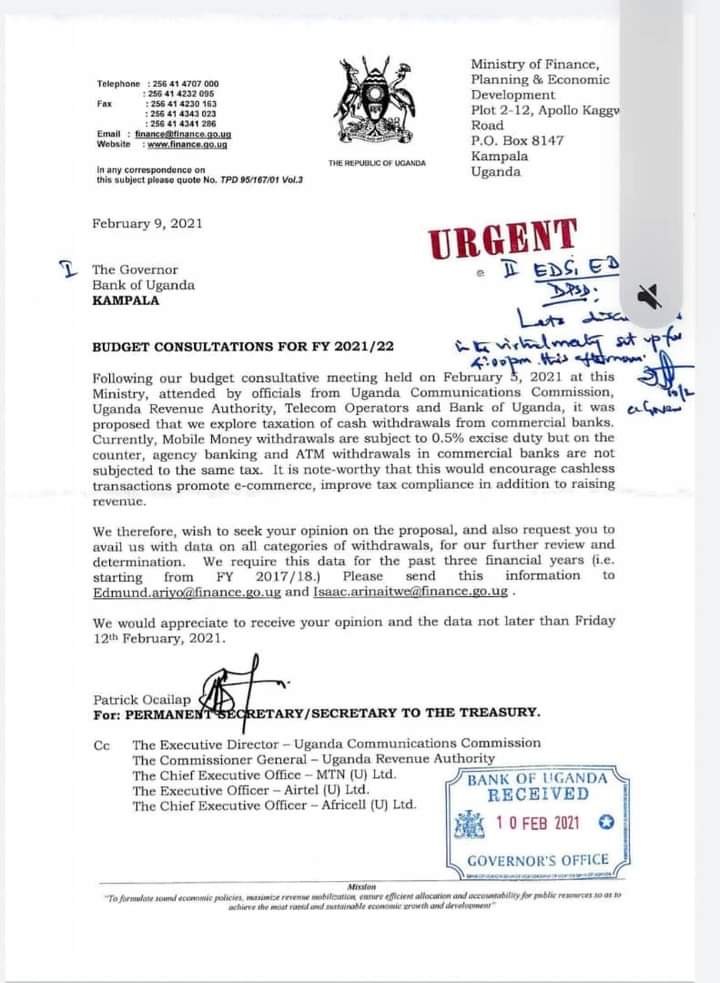 A February 9 letter written by Patrick Ocailip, the deputy secretary to the treasury in the Ministry of Finance to the Governor Bank of Uganda

However, after a big uproar by Ugandans on social media, the Minister said he had not learnt of the letter or known its content but promised to make efforts to establish facts about it.

The proposal to tax cash withdrawals from banks, according to the letter, will encourage cashless transactions and promote e-commerce, improve tax compliance in addition to raising revenue.

Currently, it is only mobile money withdrawals that are subject to a 0.5 per cent excise duty but on the counter while agency banking and ATM withdrawals in commercial banks are not subjected to the same tax.
Post Views: 1,201