The 1st Vice Chairperson of National Resistance Movement ‘NRM’, Alhaji Moses Kigongo has cautioned MPs against dragging the party’s Central Executive Committee (CEC) into the hotly contested race for next Speaker of Parliament.

“Yesterday, the 10th of February 2021, I learnt with dismay the bickering, attacks and abuses on the floor of Parliament to the extent of dragging the Central Executive Committee (CEC) of NRM into the debate…It is my considered opinion that democracy is exercised reasonably while conducting matters of National Importance,”he said.

The race for speaker has attracted Hon Rebecca Kadaga to face off with her deputy Jacob Oulanyah and Chief Opposition Whip Ibrahim Ssemujju Nganda.

One Wednesday,Parliament turned chaotic after Hon. James Kakooza castigated some of his fellow MPs of backbiting colleagues campaigning for preferred candidates in the race for Speakership.

Speaker Kadaga and Chief whip Ruth Nankabirwa’s lift has deepened further to the extent that it has affected other members of NRM party. 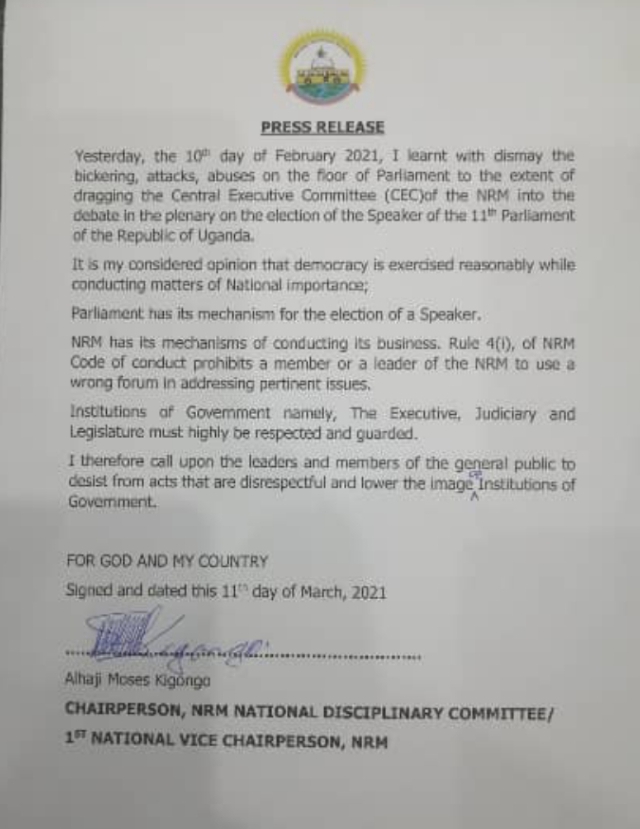