The Speaker of Parliament Rt Hon. Rebecca Kadaga has run to the Uganda Communication Commission (UCC) over a media article that exposed how she pocketed Shs2.8bn in travel abroad allowances in less than 2 years.

The speaker rushed to the national communications regulator the Uganda Communications Commission (UCC) after she was exposed of using her office to dubious mint billions without considering the country’s staggering economy.

The genesis of it all comes from an article previously published by this online newspaper disclosing how Speaker Kadaga & Hon. Okupa dubiously spent over US $764,000 (Shs2.8 BN) In-less than 2 years in travels abroad, something that actually left a couple of Ugandans including fellow legislators wondering how ruthless the duo are to their poor country.

With accompanying payment slips, the website showed how Kadaga and Okupa racked up a combined 986 days in travels where they pocked Shs2.8bn more than any other MP.

As a result, the UCC Acting ED Irene Sewankambo on 18th March summoned the Managing Editor, Capital Times seeking for a formal written response to the allegations made within a period of 3 days to “facilitate the ongoing investigations and possible arbitration of the same.

“The complainants allege that you made a false, biased, and defamatory statement against them whereas you never accorded them an opportunity to share their perspective on the subject matter,” partially reads UCC’s letter. 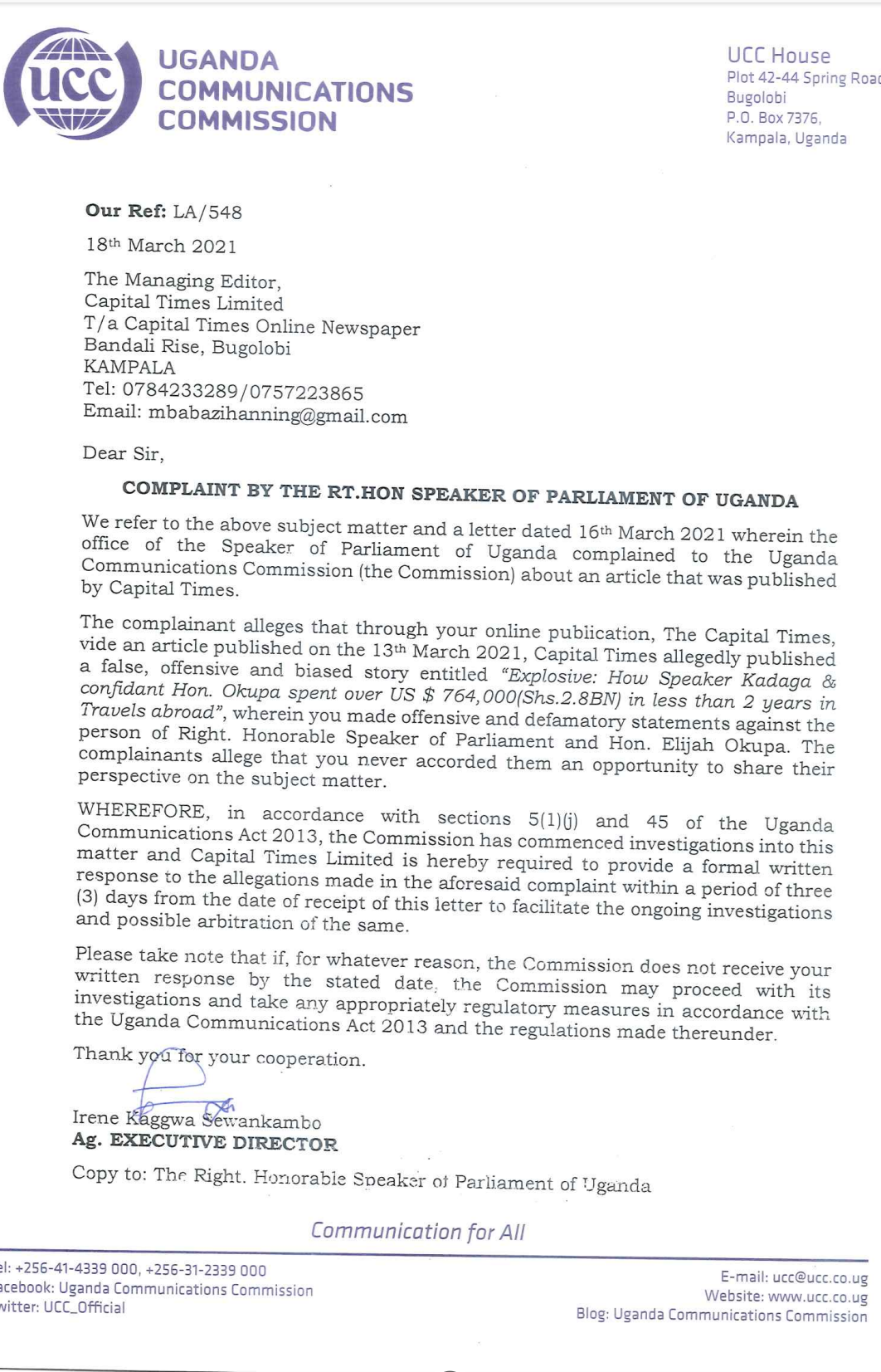 According to Capital Times, “In 16 months, the Speaker of Parliament along with her extremely close confidant, Hon. Elijah Okupa the Member of Parliament representing Kasilo County, Serere District, racked up a combined 986 days in travels while operations in the 9th and 10th parliament remain obscure as was witnessed in the media about the contested recruitment of the Chief Internal Auditor alas a story for another day, a risk Parliament would not afford to take since hiring an externally recruited official not accustomed to the accounting anomalies would lead to the discovery of the creativity that has been ongoing and such huge and unexplained travel expenses would have drawn attention from the watchful eye of the expert.”

The managing editor Capital Times Hannington Mbabazi has since revealed that he’s having evidence over the said article.

“I have evidence over this story. The problem for Kadaga is a lot of documents have since been stolen from her office.. that’s why she has since sacked all her handlers. Now they want to squeeze my balls to tell them my source of the story….” Mbabazi said.

It is believed that the Rt. Hon. Kadaga might be in fear of the paper releasing much of the hidden rot under her supervision as the Chairperson of the Parliamentary Commission.

This includes issues on procurements especially the Commonwealth Parliamentary Association Meeting that was held in Uganda in 2019, recruitment of key staff of the parliament, behind scenes activities in the passing of loans and many more.

The speaker believes that some of her fired staff may have released alot of documents to this website which could release to the public alot of secrets that always been glossed over by many media houses.

Meanwhile, according to fellow Journalists who’ve since requested to remain anonymous allege that the Speaker has always applied an iron fist on media organizations that check her excesses.