This was revealed through a post-mortem report from Mulago national referral hospital.

“This means a heart attack that is due to a blood clot that was found inside the artery that supplies blood to the heart,” Dr Andrew Ssekitoleko, the prelate’s personal physician said through a report explaining the cleric’s tragic demise.

In a statement read to mourners in the cross-shaped Rubaga Cathedral in Kampala, Dr Ssekitoleko- who also was the first doctor at the death scene told the congregation that the condition kills within a space of 3-5 minutes.

“When I found His Grace (Dr Lwanga), there was no sign that he had struggled,” Dr Ssekitoleko added.

According to Dr Ssekitoleko, the post-mortem was carried out at Mulago hospital mortuary by at least four senior pathologists in the presence of four witnesses; two of whom were representatives of the family and two physicians delegated by the church.

The post-mortem report read in Church Monday afternoon further revealed that Dr Lwanga had a history of heart complications. 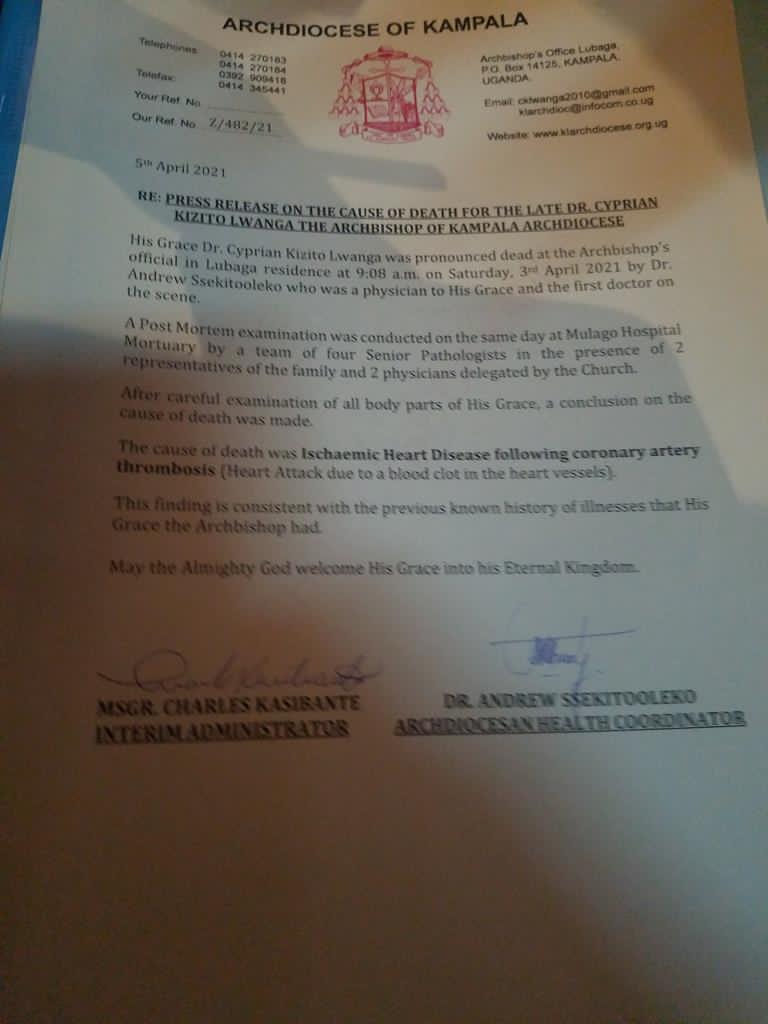 Dr Lwanga who was pronounced dead on Saturday at 9:08am, less than 24 hours after concelebrating the traditional “Way of the cross” that precedes Easter Sunday- will be accorded a state funeral on April 06, according to government.

“We shall come together to celebrate him at Kololo (Independence grounds) on Tuesday and President Yoweri Kaguta Museveni will be the chief guest,” ICT Minister Judith Nabakooba confirmed.

“We will remember him for many things including his advocacy and tasking people on working hard and staying firm in religion,” she eulogized Dr Lwanga.