Rev. Christopher Tugumehabwe has dragged former Church of Uganda Archbishop Stanley Ntagali to court for allegedly having an extra-marital affair with his married wife one Judith Tukamuhabwa.

He wants 500m from Mr Ntagali as the compensation for eloping with his legally recognized better half.
This has come after Emeritus Archbishop Ntangali last week officially confessed and apologized to the whole of church of Uganda and family of Rev.Tugumehabwe for committing a sin of adultery at the function which was held at Namirembe cathedral.

Through his lawyers of Bikangiso & co.advocates,Tugumehabwe reveals that whereas he was wedded with Tukamuhabwa in December 2018, he has found out that the love affair between his wife and the former Archbishop saw the two sire a child and that he encouraged her to seek for divorce which is against church values.

“It has also come to our client’s knowledge that you encouraged, advised and ensured that our client’s wife petitions for divorce. We have also recently learnt from various media platforms of the fact that you admitted to having committed an offence of adultery with our client’s wife. In addition, we have overwhelming video and audio evidence in proof the same.

The recent admission by Ntagali that he eloped with a married woman is evidence enough to pin him in the pending court case and that in order to avoid being taken to court, he ought to pay damages.

“Your unbecoming, sinful and unlawful conducts have occasioned our client general damages to wit- loss of dignity, marriage break down, stress, trauma, embarrassment, loss of privacy, loss of his job as a lecturer at Bishop Barham University college and minimal chances to rise in the clergy ranks.”

He wants shs500 million for damages occasioned to him and shs30 million for the costs incurred in the divorce case currently ongoing in court.

Rev. Tugumehabwe also demands a formal apology from the retired Archbishop of the Church of Uganda for eloping with his wife.

“Should you fail to comply with the above demands made therein within a period of 14 days from the date of receipt of this notice, we leave been given “a green Iight” by our client to drag you to court at your own cost, detriment, further embarrassment, and peril,” the lawyers say.
Below is the intention to sue: 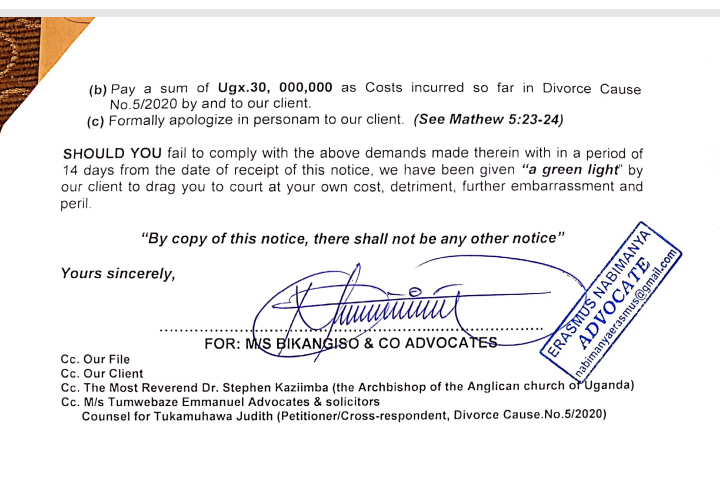