This is because the case that was filed by city tycoon Hamis Kiggundu of Ham Enterprises Limited, in which he accuses the bank of illegally deducting over Shs120Bn from his company accounts has exposed several multibillion scandals that the bank has been involved in over the years all over the East African region.

According to investigators, both DTB Uganda and DTB Kenya have over the years been involved in a series of multi-billion scandals in which they have ended up paying hefty court fines as a result of attempts to defraud clients.

As a result of this endemic fraud in DTB, the bank has over the years been sued by several of their defrauded clients, among them, being Lt. Gen. Charles Angina, city tycoons  Francis and Stella Nekuusa, Yiga Musa, to mention but a few.

Actually, some of the DTB clients who are being affected by the bank’s operations such as limitations on withdraws as the bank continues struggling to survive have started complaining, For instance, Mwembu Mwembu, who runs an account at the Oasis Mall DTB branch,  is so dissatisfied that he took his complaint to Facebook, where he complained thus;

“Did Ham’s DTB case affect the entire operation of the bank or? Of late DTB is very fake, they cut their master card ATM withdrawal limit to 5m per week! Who does such limitations? Not even a microfinance can!

As if that’s not enough, on teller counter withdraw, all changed to signing manya letter, before given a cheque leaf to fill… and then they charge that obba  15k or 25k! (Not sure) then print and sign National ID on every transaction even if it’s 100k….. is the killer for me! Kwegamba the ka bank has turned into a village Sacco of sorts. Naye Ham, you killed our bank!” 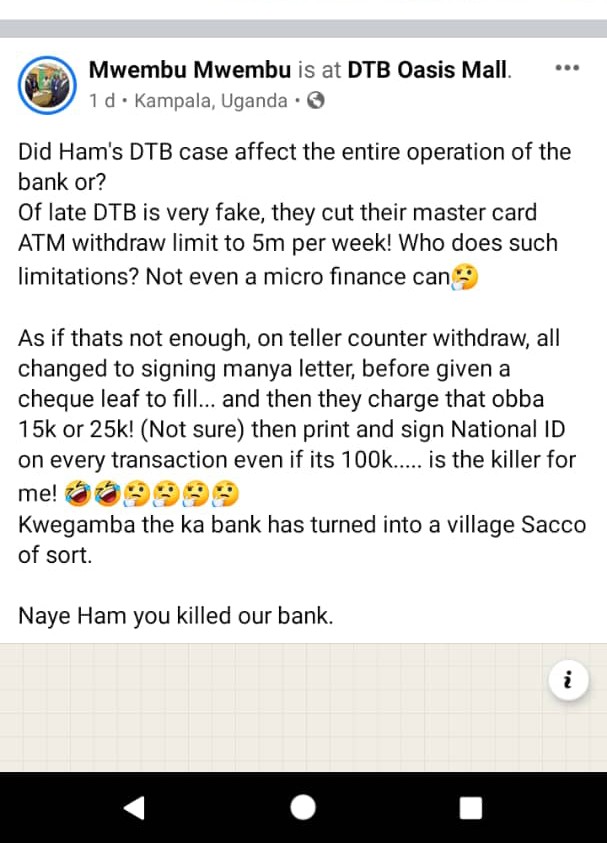 We have established that officials at DTB are operating in a manner that has since seen the bank become undercapitalized because most of the proceeds from their operations are being consumed by the Ham Enterprises case while the rest is being spent on paying huge fines for past fraud cases.

The DTB fraud involving tycoon Ham’s business empire would not have been unearthed if the tycoon had not conducted a forensic audit of his companies’ accounts which helped him to discover the bank’s unethical operations.

Actually, Ham Enterprises did not know about the bank’s fraud and dubious activities on its accounts until November 14th 2019, when the bank surprisingly demanded unknown sums, claiming there were outstanding loan balances.

The demand compelled the Company to carry out an audit on all its accounts in respect to all their previously settled and ongoing loan facilities with the Bank by then.

It was only after making a 10-year forensic accounts audit that Ham Enterprises realized how DTB had over the years been unlawfully, fraudulently and irregularly without the company’s instructions, debiting and recovering monies from Ham Enterprises accounts in breach of their contractual obligations.

It was then that Ham dragged DTB to the High Court Commercial Division to contest their illegal action and after his lawyers presented their case properly, court, presided over by Justice Peter Adenyo, ordered the Bank to refund the Shs120Bn they had illegally debited from the Ham Enterprises accounts, on top of bearing the costs of the suit.

Although DTB has since appealed the High Court ruling, it should be noted that the Bank has over the years battled several other fraud scandals, which include but are not limited to the following;

Besides tycoon Ham, another prominent Ugandan who has ever sued DTB for fraud and won the case is Lt. Gen Charles Angina.

Lt. Gen. Angina filed a case (suit no. 76/2018) in court after the bank officials took advantage of his busy schedule and committed a series of frauds on his accounts, whereby they transferred his mortgaged properties to third parties after claiming that he had defaulted on his loan, which caused him a loss of Shs1,800,000,000.

However, on March 5 2021, the Court ruled that Gen. Angina’s land titles be transferred back into his name. The same court also ordered DTB to pay the UPDF General Shs400,000,000 at an interest rate of 10% as well as bearing the costs of the suit.

The same bank also got involved in another scandal after its then clients Francis and Stella Nekuusa, who are involved in various business ventures, accused its officials of siphoning over Shs10Bn from their accounts.

Francis and Stella Nekuusa (suit no.784/2016) sued the bank in 2017 for performing a series of illegal transfers and debits amounting to a total loss of Sh10Bn from accounts without their consent and later trying to fraudulently take their properties, claiming they had defaulted on a loan.

Another prominent DTB fraud scandal involved city businessman Yiga Musa (suit no.254/2017), who sued the bank in 2016, accusing its officials of taking advantage of him not understanding and reading the English language to defraud him.

The case arose after the shameless bank officials made him sign many documents, including mortgages deeds with an intention of creating an illegal mortgage and making him a debtor before defrauding him of Shs3, 500,000, 000.

It should be noted that DTB is not only involved in these multibillion scandals in Uganda but also in Kenya, where operations of its mother bank have often been a subject of investigation by authorities there.

Investigators reveal that although there are several cases that have been brought against the bank over time, the resounding ones in Kenya include one of a South Korean investor who accused the bank of attempting to defraud his company of over KShs100M.

Sun, who is the wife of the President of Safari Park Hotel and Casino, Young K Roh, filed two cases against Diamond Trust Bank Kenya Limited, demanding her money back.

In the first case, Sun who is the chairperson of Daehan Pharmaceutical Limited, lodged a case at the High Court’s Commercial and Admiralty Division on September 14, seeking to recover the KSh100 million it had put in a fixed deposit. His company was supposed to import drugs and other medical devices from Korea and sell them in the country.

After incorporation, the company opened an account with DTB, Thika Road Mall branch, on May 19, 2015, and wired KSh100 million on October 24, 2015, with instructions that the money be put in a fixed deposit account after being promised an interest of 16 per cent.

On October 28, 2015, the bank issued three certificates of deposits for the cash, which had been deposited in tranches of KSh40 million and two others of KSh30 million each, but efforts to withdraw their money hit a snag until they dragged the bank to court.

Investigators reveal that DTB has not only been involved in defrauding its customers but its officials have also been accused of getting involved in money laundering activities.

For instance, in 2018, DTB Kenya, was cited as a conduit for siphoning funds from Imperial Bank, which led to the collapse of Imperial Bank, before DTB expressed interest in buying it out.

However, investigators later discovered that DTB’s interest in Imperial Bank was not that of an ordinary investor, because the bank had a lot to hide in its past dirty dealings with Imperial Bank depositors’ funds, which eventually led to the collapsed bank being placed under receivership and alter being bought by DTB.

According to the investigators, the role of DTB in the collapse of Imperial Bank has since come under sharp focus following its high powered push to acquire the collapsed bank.

This was after a forensic audit commissioned by Imperial Bank non-executive directors shortly after the death of former group managing director, Abdulmalek Janmohammed, discovered that DTB was one of the two banks that both Janmohammed and his co-conspirators used to move the bank’s funds in the KSh34 billion fraud.

Intelligence gathered by the forensic auditing firm, FTI Consulting, indicated that at the time of the collapse of Imperial Bank DTB held KSh408 million that had been fraudulently moved from Imperial Bank by directors of W.E Tilley (Muthaiga) Ltd, the co-conspirators in the fraud.

Further information showed that DTB was used by the directors of W.E Tilley to launder the proceeds of the fraud.

It was discovered that five months before Imperial Bank was placed under receivership, DTB received a KSh4 billion transfer from the Emirates National Bank of Dubai into the account of one of the directors of W.E Tilley, Firoze Haiderali Jessa.

According to insiders within the banking sector, DTB is one of the commercial banks in Uganda that are likely to close business in the next few years, because of being undercapitalized and heavily burdened by legal costs.

This is because the bank has seen struggling for many years to survive without success and in 2019, it was named among the worst banks in Uganda.

Actually, in 2016, the Bank of Uganda nearly put it under receivership because of under-capitalization.

Business analysts contend that as of today, the bank is currently operating largely on customers’ deposits with its total assets valued at about UGX1.606 trillion (approximately US$438.574 million) with customers’ deposits making up UGX 1.200 trillion of that value. That means the bank only has equity of four hundred six billion.

It also means that in case the bank is put under receivership and eventually closed down, millions of clients currently holding accounts with it will lose their savings because DTB is a foreign bank without big assets here in Uganda.

A report previously showed that all commercial banks in Uganda were operating above the minimum capital of Shs25b, except Diamond Trust Bank, which was below par.

In fact, the Bank of Uganda Governor Prof. Emmanuel Mutebile sometime revealed that two commercial banks in Uganda were on close watch due to undercapitalization and insiders hinted that DTB was one of them.