Kampala Capital City Authority (KCCA), Non-Government Organizations and Uganda Police have rescued at least 170 street kids from the slums of Kampala and taken them for quarantine and rehabilitation.

According to Ms Eunice Tumwebaze, the Manager for Children and Youths at KCCA, children have been settled at Nakivubo Blue Primary School where they are being tested for Covid-19 before being taken to rehabilitation centres.

“So far, there are 170 children at Nakivubo Blue but more are still on the streets and KCCA hopes to rescue them with the availability of resources. These children were surviving on petty jobs and are now struggling under the current lockdown, those who will be found positive with the virus will be quarantined at the school while those with negative results will be taken to Kaazi rehabilitation centre along Entebbe road,” she said. 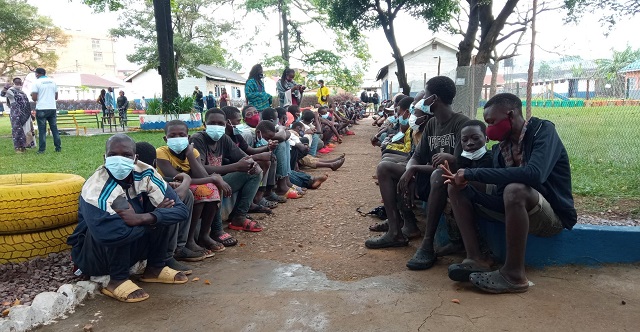 Some of the children rescued from Kampala streets

Allan Kasujja, one of the children who was rescued from the streets said that he was working with a man selling onions on a truck. His employer however dismissed him when the lockdown was instituted. But the 12-year-old, who had left his grandmother’s home in Entebbe says he resorted to sleeping at Kafumbe Mukasa road where he was picked by the KCCA team and brought to the centre.

Another child identified as Brighton Omosole from Sheema says he has lived on the streets for close to two years. Omosole says he came to Kampala to flee from torture meted on him by his parents. He says that while in Kampala, he worked at a chapati stall in Namayiba where he was earning 3000 Shillings a day, before the lockdown.

During the March 2020 lockdown, KCCA conducted a similar exercise rescuing over 85 children who were tested, quarantined and later taken to children’s homes for rehabilitation. However, some of the children came back to the streets.

Maureen Muwonge, the Director of Operations at Dwelling Places says the children come to homes with different vices that the social workers seek to help them get rid of. She says some engage in fights, use abusive and vulgar language while others even abuse drugs.